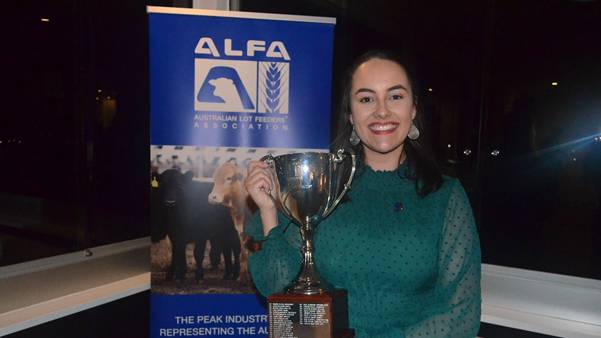 The Australian Lot Feeders' Association is calling for nominations in its prestigious Young Lot Feeder of the Year award, recognising future leaders under 30 years of age.

Since 1991 the award has been encouraging emerging industry leaders to contribute their ideas for the industry, according to ALFA president Bryce Camm.

"We want to foster qualities in our next generation leaders that empower participants to think outside the square, to be bold in their vision and continuously develop and challenge their thinking about the Australian lot feeding industry and its potential," Mr Camm said.

"We're looking for applicants who have potential to fulfil leadership roles in the future. If you have an outstanding young person in your team or business, we encourage you to get them to enter."

The winner receives $5,000 funding towards a study trip or further study, along with a grain fed beef industry scholarship worth $10,450.

Ms Sage commenced her feedlot career as a feed truck driver and it was during this time she started thinking about entering the ALFA Young Lot Feeder of the Year Award.

She first entered in 2018, placing in the top six. The following year she entered again, making the top three finalists. In 2020, through utilising the learnings of participating in the program and perfecting her essay topic, Ms Sage was crowned the 2020 Young Lot Feeder of the Year.

She created a theory where algae (Lemna) could be used to create biofuels to power the boilers in mills, as well as using the byproduct from the biofuels to fuel the livestock.

"I'm passionate about trying to minimise our carbon footprint as an industry. If we were planting duckweed and using it as a biofuel then it would reduce our carbon emissions," she said.

"I would encourage any young lot feeder with a passion for their role in lot feeding to apply for the Award, it has opened up so many doors for me."

Applications can be made via the ALFA website [http://www.feedlots.com.au/ylfya and close June 30. Six finalists will be selected to be interviewed in Brisbane on August 25 by a judging panel, with applicants' travel expenses arranged and funded by ALFA. Three grand finalists will be invited to the annual conference, SmartBeef in October for the announcement of the overall winner.

The nomination process requires entrants to write up to 1000 words on an industry problem and explore solutions. ALFA wishes to thank its long-term supporter and Platinum Member, Performance Feeds, for sponsoring this award.

The Australian cattle feedlot industry contributes $4.6 billion to the Australian economy and directly employs more than 2,000 people in feedlots of which 98 per cent are owned by family farmers. ALFA believes it is important to foster and encourage emerging leaders in the industry to take charge of future opportunities.