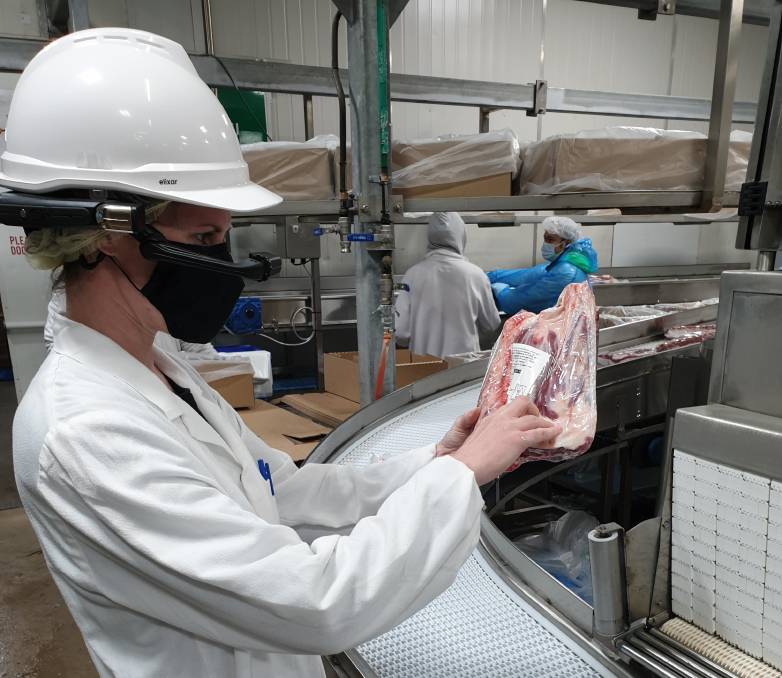 THE RED meat industry is not about to let pandemic-driven limitations on face-to-face business and international travel slow down the quest to open new markets.

Innovative augmented reality smart glasses technology is being trialled extensively, with remote auditing, inspection and even procurement shaping up to be built into everyday business in the very near future.

Australian immersive technology company Bondi Labs has been working for several years on wearable, artificial intelligence enabled hands-free technology that would allow for the remote seeing and assisting of tasks and operations within a meat processing facility in real-time. Their work has been supported by the Australian Meat Processor Corporation led by senior research manager for market access Matthew O'Bryan.

In April, a trial remote audit of Queensland plant Nolan Meats at Gympie was conducted with halal certification agencies in the United Arab Emirates and Turkey.

A quality assurance officer at Nolan Meats donned a headset, allowing remote inspectors to see everything as that person walked through the plant.

"The inspectors were able to issue instructions as the officer moved through sections," Dr Smith said.

"It's a hands-free technology so the wearer can do natural tasks, while giving verbal instructions like zooming in on sensor gauges or product labels.

"The remote inspector in Turkey might want to see documentation related to work being done by someone on a production line so at the same time they can ask another QA person in an office to bring up that documentation on the screen in real time.

"In a normal audit process, if they need that documentation they have to stop and walk up to the office or try and remember to look at this documentation after the walk through.

"Simultaneous observation of the facility and document access enables a lot of time to be saved and the potential for miscommunication is reduced."

Dr Smith, and Bondi Labs' managing director Jonathan Marshall, said the feedback from those overseas remote auditors was the technology provided the visual verification they needed to have confidence to do business with Australia.

Similar trials are now planned for the Saudi Arabia, Vietnam, Malaysia and Indonesia.

Mr Marshall said in the wake of China disruptions, processors were keen to give real-time visibility into Australian meat processing plants to facilitate the opening of new markets faster.

The technology is a world-first and had the potential to give Australian beef a real competitive advantage, he said.

"What is also attractive, is this is an opportunity for Australia to set global standards for remote food safety auditing regulation," he said.

Meanwhile, Bondi Labs is also undertaking a series of trials with processors across the country, along with auditing bodies including AusMeat and the Department of Agriculture, to build confidence the technology does not in any way compromise food safety requirements and determine what tweaks need to be made. Leading processors including Wagstaff, Teys, JBS, NCMC, Bindaree Beef, Fletchers and Greenham are involved.

In Australia all food safety regulation costs are borne by industry and larger operations report they host up to 80 on-site audits, some of them lasting several days, in a single plant in a year.

The new technology has the potential in the future to cut those costs by 75 per cent while maintaining standards, Mr Marshall said.

Bondi Labs report the cost of equipping and gearing up existing quality assurance management team members to physically undertake the audit, joined remotely by the inspector, would likely be covered off in the first two audits.

The technology also had the advantage of encouraging processors to consider broader digital strategy plans about how to adapt to the new data driven world, Mr Marshall said.

From the Government's perspective, the technology ticks the boxes of reducing regulatory costs on the industry and opening new markets while maintaining the highest standards around food safety, he said.

The longer-term goal is continuous verification, capturing data on an ongoing basis so at any point it can be accessed using AI to identify any mismatch between say box labelling and actual product.

The technology is making waves throughout the food sector, with future trials planned in the pork, seafood, dairy, eggs, poultry and horticulture sectors.