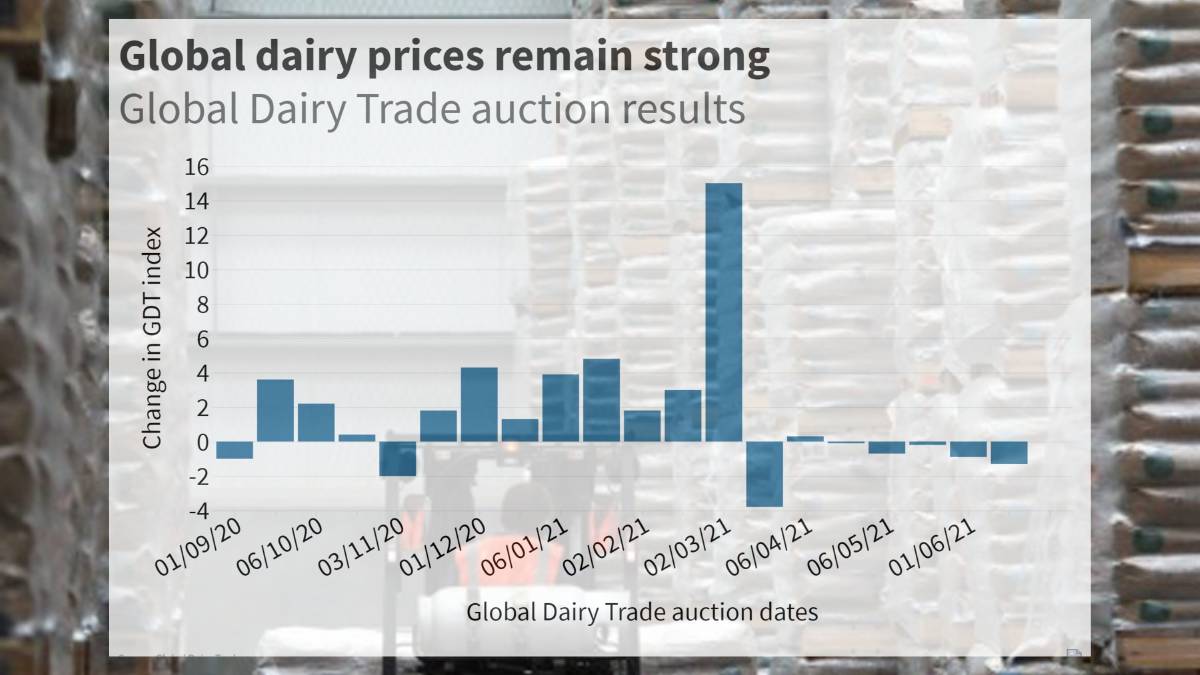 Another fall in the Global Dairy Trade auction on Tuesday night is not a concern, according to dairy market analysts.

Another fall in the Global Dairy Trade auction on Tuesday night is not a concern, according to dairy market analysts.

The Global Dairy Trade price index was down 1.3 per cent - the fifth consecutive minor drop in prices.

Butter and skim milk powder were also down, both recording a 1.7pc drop.

"While this auction's more sizeable fall will have wrongfooted some analysts, we emphasise the key theme is still that prices remain remarkably resilient," he said.

"Little has changed in terms of market fundamentals - WMP prices are still running circa 40pc ahead of last year, and other products are enjoying similarly lofty premiums.

"While prices have edged down across all contracts, the curve remains flat rather than downward sloping."

The price fall reflected the strong end to the production season in NZ and an element of cashing in on the high prices.

"(NZ) April production was up a whopping 11.6pc on the same month last year," he said.

Mr Penny said Fonterra also appeared to be taking advantage of the higher prices to lock in gains.

"For example, the quantity sold over the last three months is around 17pc higher than the same three months a year ago," he said.

"Similarly, over the same period, Fonterra has offered WMP contract 6 (i.e. product for delivery in 6 months' time) in another attempt to make the most of the very high prices.

"The last time Fonterra offered contract 6 was back in 2018."

"Indeed, Fonterra has pre-sold more than it would normally have at this stage of the season, and it has done so at very high prices," he said.

"While we expect prices to edge down further from their highs, a sharp correction continues to look like an unlikely prospect," he said.

"While there's an awful lot of uncertainty this far out from the end of the season we still expect global demand to outstrip global supply over the remainder of the year.

"Aggressive Chinese purchases have yet to let up, and when if they do, we expect the return of other buyers should prevent prices moving too low."