Big, plain-bodied sheep that don't require mulesing are what the Kelvale stud is known for breeding. 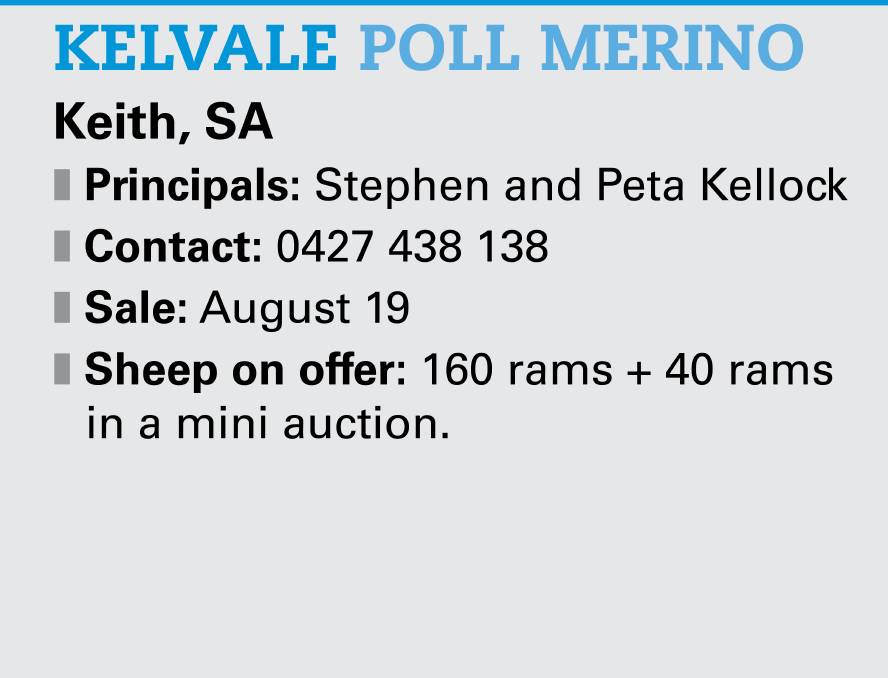 Clients of South Australia's Kelvale Poll Merino stud are reaping the benefits of its focus on breeding for a balance of profit-driving commercial traits.

These include selection for heavy-cutting fleeces with a range of quality attributes, lamb growth rates, ewe fertility and meat yield.

Average wool staple strength has increased in recent years to allow the stud and its clients to shear and receive a wool cheque twice a year, which is an increasingly popular management tactic across suitable areas of South Australia.

Kelvale, based at Keith, SA, has also been making gains in breeding sheep that do not need mulesing.

This not only helps with ease of management, but is also likely to attract price premiums in the market in coming years.

To achieve this, the stud has concentrated on easy care, wrinkle-free sheep and it ceased mulesing in commercial and stud flocks in 2008.

"Many of our clients are also attempting to cease mulesing in their own flocks, starting with wethers and learning about the type of animal required to cease the practice completely," Kelvale stud principal Stephen Kellock said.

He said the pursuit of a truly dual-purpose Merino had increased breeding emphasis on growth rate and carcase traits.

"Our clients have had great results when Kelvale blood wethers have been fed in a feedlot, averaging 22 kilograms or more for a dressed carcase at eight-months-old," he said.

Kelvale has been a strong proponent of performance recording and benchmarking its performance against other breeders through the SA Sire Evaluation Trials, and has entered several rams at the Keyneton Station and a Lamaroo property site.

In 2019, one of its young rams was identified as the trait leader for staple length, staple strength, coefficient of fibre diameter, yearling weight, eye muscle depth and positive fat flock trait measurements - and produced the highest number of top sheep during visual classing.

It was selected for the trials by the Kellocks as being an example of the stud's "all round performer" genetics and had strong MerinoSelect figures.

"The trials give all sires the same opportunity to express their attributes in a commercial flock," he said.

"We have found we excel in many traits, including getting consistent top results in survivability of progeny.

"In the most recent trial, we had 55 progeny, of which two thirds were raised as twins from 60 ewes mated through AI.

"The average of the sire group was 42 and the lowest was 26.

"Producing twice as many lambs, in a commercial flock, means the dollars stack-up for our clients."

Kelvale ram buyers Anthony and Sarah Lowe, and Anthony's parents David and Marg, of Mundulla, took a lead from the stud and entered their local prime lamb competition earlier this year.

The family was the first in the trial's 13-year history to win with a pen of Merinos.

Their 10 wether lambs, which were 53.7 kilograms curfewed liveweight at eight-months-old had a 37.7-millimetre eye muscle depth and 5.5mm fat depth - and had placed third on-hoof at the Mundulla Show.

But it was on-hook, when the lambs were processed at JBS's Bordertown abattoir, that they were elevated to the top spot.

An exceptional dual energy x-ray absorptiometry score helped them come out on top from 19 other Merino and crossbred entries, scoring 408.8 points out of a possible 470.

Mr Lowe said the competition was an opportunity to receive feedback about their breeding and management performance.

The Lowes have mated 3400 ewes and ewe lambs this year, about half to Poll Merinos and the remainder to White Suffolks, for a July lambing.

Mr Lowe said the Merino lambs were provided with ad-lib access to grain in Advantage Feeders from birth right through their lives.

He said this mirrored the tactic used for several years with their crossbred lambs to be able to turn them off at a younger age.

"Ewes and lambs have access to the grain first," he said.

"So, the lambs learn from watching the ewes before the feeder is then altered to just allowing the lambs to feed.

As the paddock feed quality dropped off in late spring, they trail fed some beans in the paddock, which got the lambs accustomed to bean stubbles.

These were used to run the lambs from December last year until they were sold from mid-January.

The lambs were shorn in late November, delivering $8/head in profit after shearing costs.

Mr Lowe estimated the first draft that was sold in mid-January consumed about $9 a head of wheat, working on wheat costing $300 a tonne.

The competition lambs were selected from the second draft of 450 with the help of the Lowes' livestock agent, Spence Dix & Co's Kym Lovelock. They had consumed about $12/head of grain.

The remainder made $202/head on-the-hooks at JBS with an average carcase weight of 23.3kg.

It is not just feeding that is the focus of the Lowes' sheep operation, with equal importance placed on genetics.

They have been buying rams from the Kellock's Kelvale stud for the past five years and prior to that bought many ewes from the stud and its commercial clients.

They say these bloodlines have given them a fertile, easy-care flock, and enabled them to cease mulesing in 2020.

"There may be a little less wool cut but we have better lambing percentages, plainer bodies and we get two shearings a year," Mr Lowe said.

He said the family had also started mating ewe lambs, which could be a "potential game-changer" if high conception rates could be achieved.

"These lambs were all 40kg-plus when the rams were put out in early February for three breeding cycles," he said.

"Along with quality wool and a reasonable wool cut, we see the profit drivers as high lambing percentages and being able to get good weight gains to sell stock off earlier."