Dead livestock, damaged fences and ruined pastures are what farmers are finding. Parts of Gippsland received a record amount of rain last week and farmers are still assessing the damage to their properties as floodwaters begin to recede.

Dead livestock, broken and damaged fences, ruined pasture and flooding are what some producers across the region are dealing with in what some described as one of the worst floods in their lifetimes.

Falls of more than 130 millimetres fell on low-lying country in one day, while in the ranges and catchment areas of major creeks and rivers, totals were well in excess of 260mm - catching many people by surprise, despite the Bureau of Meteorology issuing warnings leading up to the event.

At Yinnar, Vic, on the Morwell River and Middle Creek, share dairy farmer Jason Lee woke to the sound of sirens last Wednesday morning, but never expected the flooding to be so widespread. RECOVERY: Yinnar, Vic, dairy farmer Jason Lee stands in front of what would normally be one of his grazing paddocks.

Mr Lee said about 200 hectares of his properties were flooding, damaging pasture, fodder and between 10-20 kilometres of fencing.

"So far I've only found two dead stock but still we're waiting on the floodwater to recede because we expect to find more," he said.

"We moved our cows to higher ground but sadly some of the ground wasn't high enough.

"You talk to a lot of locals and they say in 40 years the water has never been that high."

Mr Lee said he was working tirelessly to make boundary fences stock-proof after the floods and said he would begin drying off cows in an attempt to improve animal welfare.

"There will be a loss of production and we have had cases of mastitis because we were unable to milk but we hope by drying them off earlier, it will give them a chance to recover before they calve down," he said.

Downstream on the Latrobe River at Glengarry, Vic, mixed farmer Alan Paulet estimates all but half a hectare was under water on his 120-hectare beef farm during the floods.

Mr Paulet said it was too early to gauge the full extent of damage to infrastructure, fence lines and pastures, but from early signs of receding floodwaters, the damage was not as severe as first thought.

A major concern for him though was the flood warnings issued in the lead up to and during the event, describing them as "woefully inaccurate". Flood warnings for the Latrobe River were listed as moderate last week, despite many long-term farmers including Mr Paulet describing it as one of the worst floods in living memory.

"Whether it's because of a lack of management or the river bed was choked, it certainly wasn't carrying the volume of water it had in previous floods," he said.

"Could this be a result of civil works during the 2012 river diversion near the Yallourn mine which has affected the accuracy of the stream flow monitor?

"We've seen a hell of a lot of water come down the river and the stream flow levels have been at historically moderate levels, but on the ground they are the biggest floods I've seen in my time."

About 10 kilometres up the road, Scott Langley of Langley Farms is yet to assess the damage after the Latrobe River burst its banks on other nearby properties, flooding 200 hectares of his farm, Ravenswood.

"Given the banks have let go upstream, we're going to get inundated throughout the whole of winter now," Mr Langley said.

"The river is going to have to drop well below I don't know what height for the banks to be repaired and then again it's not even on my property." 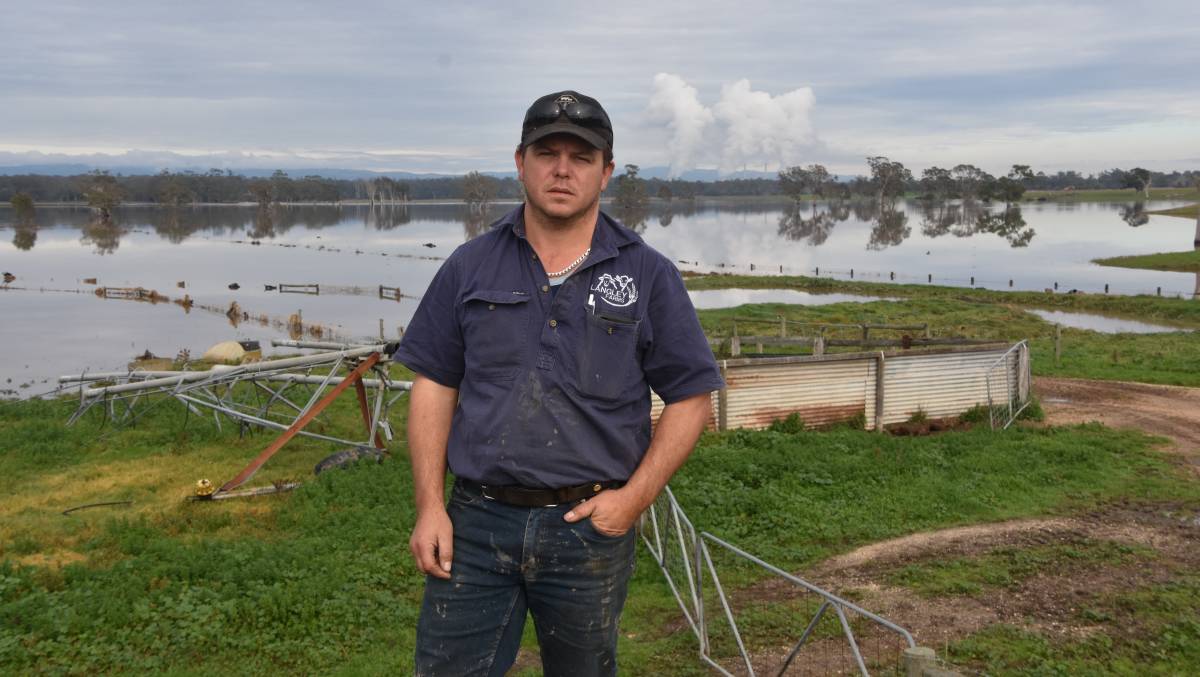 LONG-TERM EFFECT: Scott Langley says it will take months for his low-lying pasture to recover.

Mr Langley, who runs a sheep, cattle and cropping enterprise, said the degradation of river banks by neighbouring farmers had been a concern in the lead up to the floods.

"There seems to be very little damage where river banks have been fenced off and regenerated," he said.

"Where cattle are allowed to walk on banks and other vermin are not maintained, it's on those farms where the river has breached."

While he admits his property includes a floodplain, he believes better management of riverbanks could go someway to minimising the effects of floods.

"The bigger concern from this flood is the damage to the river banks upstream and even when it doesn't rain here now, but it does upstream in the catchment area, that will be the real unknown," he said.

The flash flooding brought down thousands of trees across eastern Victoria, leaving behind a trail of destruction and more than 245,000 people without power in what companies like AusNet Services described as one of its most challenging and widespread outages in history.

In parts of Gippsland, farmers have been left without power for more than a week after the storm passed.

Claire Harris, Harris Farms, Buffalo North, was one of those producers.

"Everyone is tired but we're also very understanding of the situation and the community is working together and helping each other out," Mrs Harris said.