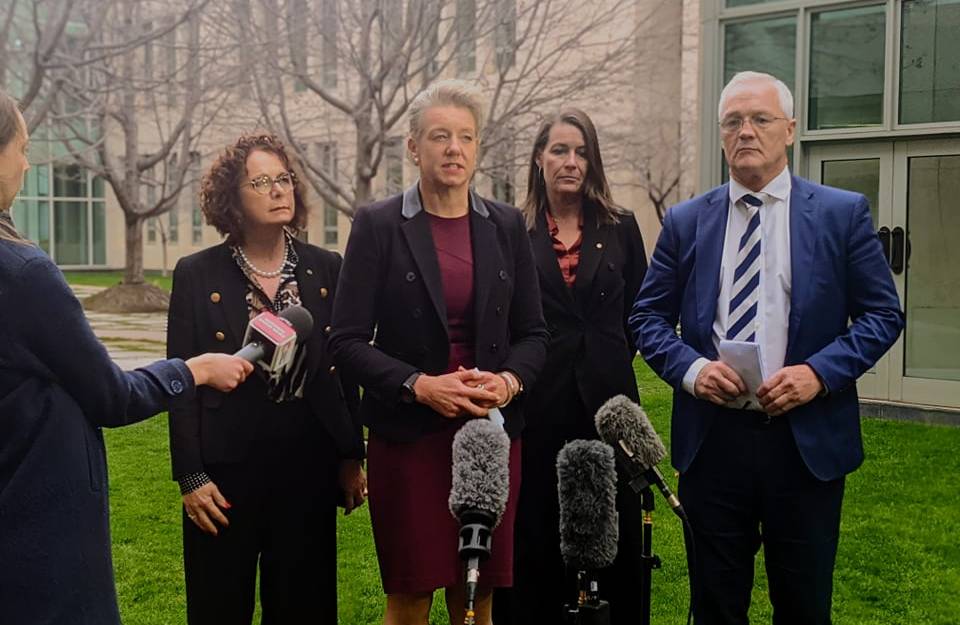 The Nationals attempt to drastically alter the Murray-Darling Basin Plan has sparked calls for the party to be stripped of the water portfolio.

THE Nationals attempt to drastically alter the Murray-Darling Basin Plan has sparked calls for the party to be stripped of the water portfolio.

The Nationals senate team moved an amendment to a bill that would carve off part of the Murray-Darling Basin Authority to create a new compliance agency.

The amendment would effectively remove the 450-gigalitre water recovery target, legislate the promise of no more water buybacks, enable new offset projects and ensure no more water is taken when the plan concludes in 2024.

Senator Bridget McKenzie denied allegations the move had anything to do with Barnaby Joyce becoming party leader.

The legislation was in the works for "months and months", and endorsed as Nationals policy in the party room meeting on Monday.

However, Liberal senators were not informed until moments before the bill was introduced on Wednesday.

Nationals whip Damien Drum said 97.5 per cent of the water the plan set out to recover was achieved a decade ago.

"What we're saying is, for goodness sake Australia, look at the damage and pain, look at the pain you've done to our communities - enough is enough," Mr Drum said.

Senator McKenzie said communities had been ripped apart, while farmers had been forced to sell up because they couldn't afford water under the plan.

Nationals Senator Perrin Davey said the right to farm had slowly been undermined because of the fixation on recovery target numbers.

"I want to get back to the intent of the basin plan - this is not about blowing the plan up, it's about getting it right," she said.

South Australia would be the most impacted by the proposed changes and in a rare show of unity the state's senators, including the Liberals, reached across the political divide denounced the move.

Greens Senator Sarah Hanson-Young called on the Liberals to stare down the motion that would "launch a new war" on the MDBP.

Labor and the crossbench called for the Nationals to be stripped of the water portfolio.

If the amendment went through, independent Senator Rex Patrick threatened to "block the number" of every government minister and refuse to negotiate with them on legislation.

"They can play Russian roulette on how I might vote," Senator Patrick said.

SA Liberals did not comment on removing the Nationals from the water portfolio, other than to say "ministry was a gift of the Prime Minister".

"Government policy is to deliver the Murray-Darling Basin Plan on time and in full," SA Liberal MP James Stevens said.

"Any move to amend that is going against government policy."

The debate was adjourned on Wednesday. The Nationals are hoping to have the bill referred to a committee over the winter break, so the party can have one month to present its case.

Mr Drum said for the proposal to get up, "we'll need the Liberal Party to come on board".

"Then we will have a lot of work to do to win over the crossbench in the Senate," he said.

Liberal senate leader Simon Birmingham said the government would be voting against the amendments, but it is unclear if it would supportan inquiry.

"The government stands resolute in its support for the implementation of the Murray-Darling Basin Plan, as we have said, in full and on time."

"I have spoken with [Water] Minister Keith Pitt today to express my disappointment in this stunt by the National Party," Mr Speirs said.

"We will continue to push all basin jurisdictions to deliver what's already been agreed for the good of the river and the communities which rely on it."