This is the first year Overwatch has been available to growers around Australia, with its active ingredient bixlozone making it a unique weed control option in the broadacre market. 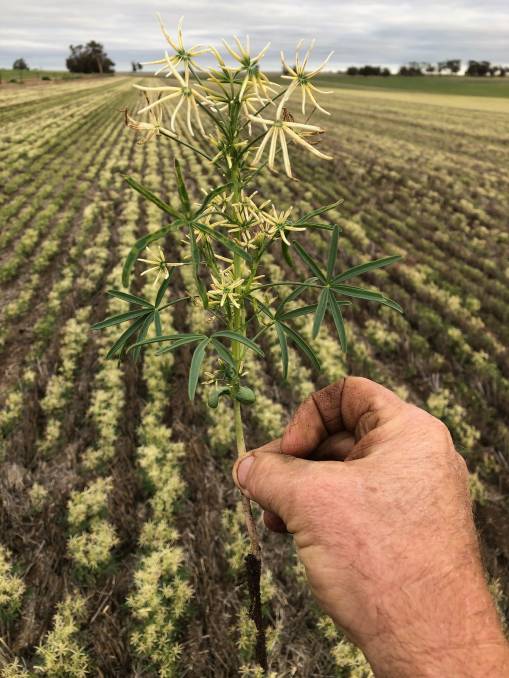 A lupin crop belonging to a farmer in Bolgart has suffered elevated levels of bleaching after the paddock beside it was sprayed with Overwatch.

ELEVATED levels of bleaching in crops sprayed with Overwatch, a new mode of action from chemical company FMC, have been reported around the State, with the whitening also found in paddocks near ones that were sprayed with the Group Q herbicide.

This is the first year Overwatch has been available to growers around Australia, with its active ingredient bixlozone making it a unique weed control option in the broadacre market.

It is a pre-emergent herbicide for application as an incorporated by sowing treatment in wheat, barley and canola for residual control of annual ryegrass and regionally specific broadleaf weeds.

However initial excitement over the new mode of action has been tainted by reports of the bleaching it has allegedly caused and while the majority of growers plan to keep using the herbicide, they want answers as to what is causing the elevated whitening and paddock jumping.

FMC head of development Geoff Robertson said bleaching was a generic term used to describe the crop symptom where the leaf colour changed and different products on the market could cause bleaching in the crops that they're applied to.

"With Overwatch, where the product has been applied pre-emergent to a wheat, barley or canola crop, in most cases growers won't observe any transient bleaching but in the cases where they do, it is transient in nature which means that the bleaching does appear but the crops grow out of it," Mr Robertson said.

"What we've found is that the bleaching typically peaks around four to five weeks after crop emergence and under typical growing conditions, the crops grow out of that bleaching over time and there is no yield penalty at the end of the season."

However, reports of elevated levels of crop bleaching have been brought to the attention of FMC, with the team in WA that has inspected those crops figuring that there are four key elements which could have contributed to that elevation.

"One is considering what other herbicides were in the tank mixture and the FMC team has identified a number of situations where Overwatch had been applied with other pre-emergent herbicides, such as trifluralin and the crop effects from that partner herbicide have been observed in the paddock," Mr Robertson said.

"The second element is seed placement - for any pre-emergent herbicide it is important to keep treated soil away from the seed and for Overwatch any seedlings which germinate within three centimetres of the soil surface may be at risk of increased crop bleaching.

"Thirdly, heavy rainfall events and strong winds after a pre-emergent herbicide has been applied can cause it to move back into the seed furrow or into the crop root zone and in those instances elevated crop bleaching can occur."

The last element identified by FMC was any and all other stress factors such as nutrition, insect damage, waterlogging and root or foliar diseases which can affect the ability of the crop to grow out of that transient bleaching.

According to the Overwatch product label, in serious cases of overdosing or unfavourable conditions, phytotoxicity can also lead to stunting and a reduction in crop plant populations or thinning.

A farmer from Bolgart applied Overwatch to his wheat and barley paddocks at a rate of 1.25 litres per hectare in a tank mix which included Logran at 30 grams per hectare, Treflan at 2L/ha, Gramoxone 360 at 1.4L/ha, Hammer at 20 millilitres a hectare, Chlorpyrifos at 300ml/ha and Wetter 1000 at 0.2 per cent.

While the paddocks which Overwatch was applied to directly have been unaffected, nearby lupin paddocks have suffered from off-target drift and the bleaching effect has been undeniable.

"We sowed the lupins about April 17 and they were up and growing and doing very well," the farmer said.

"I then sprayed the paddock next door, which was a wheat paddock, with Overwatch along with other compatible pre-emergent herbicides and about five days later I could see something happening in the lupins, then after a week or so the leaves had gone white."

"That could not have been caused by spray drift as the visual effect of the other Logran and Gramoxone have not been seen, plus when it was sprayed, the wind was blowing away from the lupins, but it still ended up in there."

FMC has been testing Overwatch since 2014 and in that time has conducted more than 100 small plot replicated field trials around Australia in a range of conditions and soil types.

The company attained registration of Overwatch from the Australian Pesticides and Veterinary Medicines Authority (APVMA) last year and since then has completed further large scale, onfarm demonstrations using grower seeding equipment in their own paddocks.

"There has been some talk around the volatility of Overwatch, but the data that was put into the product submission was verified by the APVMA and the product is considered by them to be non-volatile," he said.

"However, it's important to note that we're still out there visiting growers and trying to work through the situations of the sprayer set-up, wind direction, environmental conditions etc to try and figure out what is going on."

The farmer from Bolgart said it was a bit of a complex situation as he had damage to his lupins from three separate boomsprayer tankfulls, all under entirely different spraying conditions.

"In one of those scenarios, one of them has gone across a creek and up a hill one kilometre, which maybe could be from the dust blowing from the air seeder but I'm not sure," he said.

"Another of the applications was sprayed late in the afternoon so there could have been some inversion, but I slowed right down, used air induction nozzles and big droplets and there are no signs of (affects of) Logran and Gramoxone in the lupins, so it's only the Overwatch symptoms." 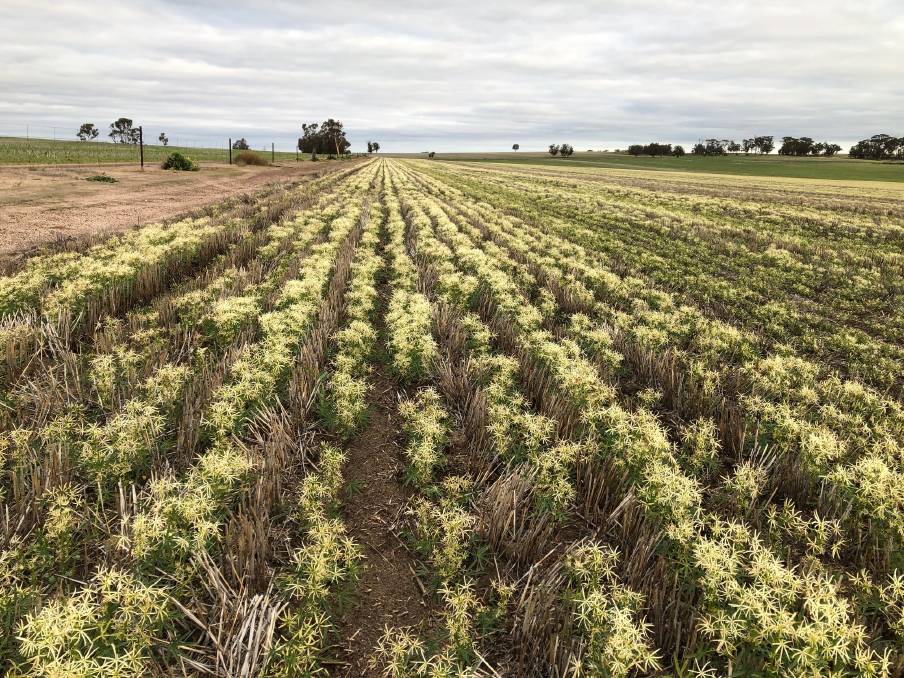 Captured on June 2, the bleaching effect in the lupins is evident after the wheat paddock beside it was sprayed with Overwatch on May 13. The lupins had started to recover and were greening up again on June 17, but it's a thinner crop and lost three to four weeks of growth.

About a third of the product applied nationwide this year has been in WA and the other two thirds in the Eastern States.

So far this season there has been one reported case of elevated bleaching from Overwatch in New South Wales and two in South Australia, while in WA there have been between 50 and 60 cases.

"In most of the reports we've received from WA, it's been observed that the product hasn't been used in accordance with the label or best management practices for minimising spray drift," Mr Robertson said.

"We've been manufacturing Overwatch at our facility in NSW since mid-last year, so a variety of different batches have been sent to WA.

"The quality assurance in terms of producing those batches to the manufacturing specifications that are registered with the APVMA are monitored very closely, so there is no possibility that 'dodgy' batches have been sent to Western Australia."

While the lupin crops in Bolgart have started to green up again, as FMC said they would, the farmer there believes there will be a yield loss at the end of the year.

"The crop has improved now but it has probably lost three to four weeks of growth, so while it is coming back, there have still been some losses," the Bolgart farmer said.

"There is going to be some yield loss where the crops were bleached - it's a thinner crop and they've lost almost a month of growing, which I think is the main factor."

As well as affecting nearby paddocks on the same farm, there have also been reports of off-target drift affecting a neighbour's property, with Mr Robertson acknowledging that those issues are extremely sensitive.

"We've had someone fly over from NSW to help the team in WA - together they've been going from paddock to paddock for the past five weeks to work hand-in-hand with growers and agronomists to figure out what is going on," he said.

The farmer from Bolgart said he could not fault FMC when it came to the assistance it has provided since he reported the issue, with multiple inspections from the WA-based teams taking place.

"We want to continue to use this product going forward but the formulation might need tweaking to make it stay on the ground," he said.

"I'll be happy to use it again, but I'll really have to watch what crops are growing around when I do and I won't be spraying it on any paddock that has a lupin crop that has already emerged close-by.

"Being a new mode of action, it's another tool we can use and in farming, the more tools we have the better."