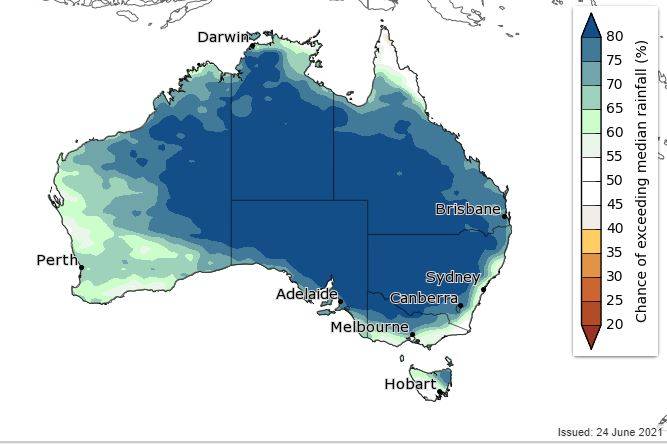 There is a strong chance of above median rainfall from July to September through much of Australia.

The weather outlook all the way out to October is looking promising for those wanting more rain.

Vast swathes of the eastern half of the country have an 80 per cent change of exceeding median rainfall for July-September.

Only south-western WA and southern Victoria of the key production regions do not have high likelihoods of a wetter than average late winter and early spring, however even in these areas there is still a slightly above average change of exceeding medians.

Promisingly for those looking for wetter than average conditions the BOM said its forecasting skill at this time of year was historically high to very high for most of Australia.

In further good news looking out as far as October there is a good chance for rainfall.

Good rain in the spring is the most valuable for croppers in terms of setting up yield potential.

The BOM forecasts are primarily based on the Indian Ocean Dipole and the increasing likelihood of an IOD negative event.

IOD negative events are correlated with wetter than average conditions over much of the country.

BOM reported that the IOD index has been below the negative IOD threshold for the past five weeks, with no models forecasting a rise in the index any time soon.

For an IOD negative event to be officially called the index must remain below thresholds for eight weeks.

The BOM said large parts of the eastern Indian Ocean are now warmer than average, with cooler than average waters near the Horn of Africa-a pattern typical of a negative IOD.

Four of the five climate models surveyed by the Bureau predict a negative IOD for the second half of the southern hemisphere winter and into spring.

On the other side of the country the El Nio-Southern Oscillation (ENSO) remains neutral with all oceanic and atmospheric indicators within the neutral range.