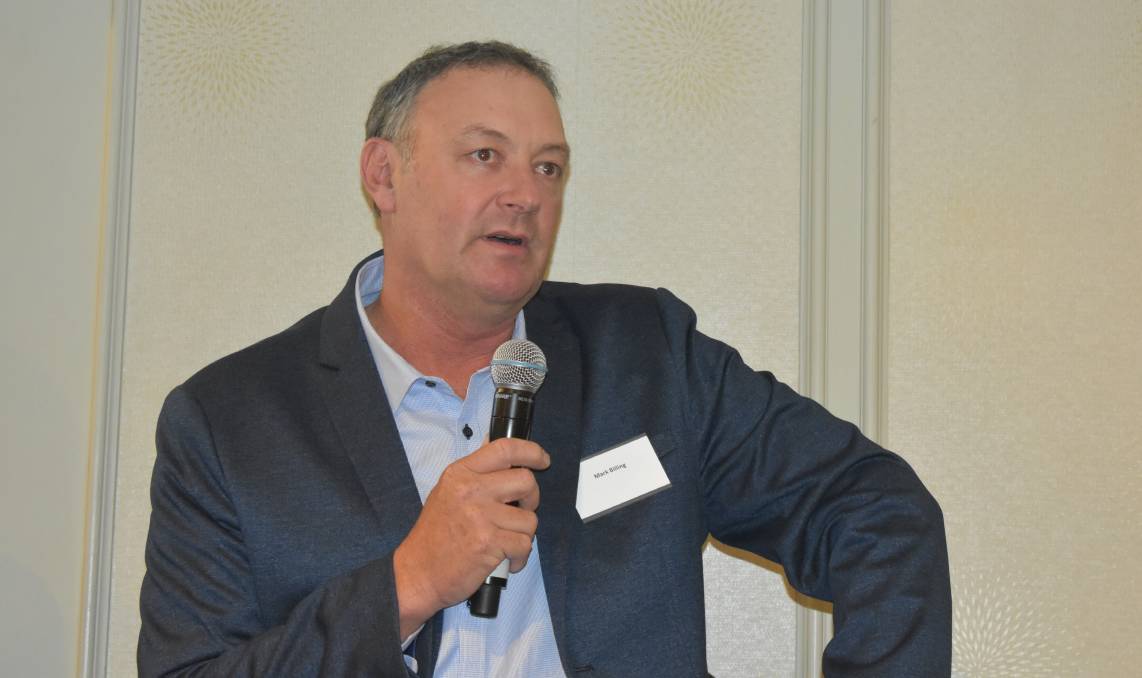 OPTIMISM: Mark Billing says there is "a general good feeling" in the dairy industry, with high opening milk prices contributing to optimism.

A prominent Victorian dairy farmer says the industry is going through a period of consolidation, with primary producers facing more choices than he could remember.

Colac's Mark Billing was part of the panel presentation at this year's Dairy Australia Australia Dairy Situation and Outlook breakfast.

Mr Billing, who is also the United Dairyfarmers of Victoria vice president, said flat milk growth was partly due to dairy farmers switching to beef production, to capitalise on high prices.

Despite that, he said there was "a general good feeling" in the industry, with high opening milk prices contributing to optimism.

"There is no doubt the price correction of 2016 hit a lot of farmers pretty hard, and the subsequent year did not have the best milk prices," Mr Billing told the breakfast.

"We are now going through a period of consolidation.

'"I think those who have been in the industry long enough know that somewhere along the line there will be that correction."

He said he hoped there was no 'milk-price bubble', as farmers liked to have a static situation, when doing budgets.

"The season, these days has more impact on our profitability than milk price," Mr Billing said.

"We have had good seasons in Victoria - they have been pretty conditions to be milking cows in, the last summer was one of the best summers you could want.

"The seasons have had a good effect on how we feel as dairy farmers, and milk prices are no doubt supporting that, as well."

But he said one of the biggest challenges would be staff shortages and succession planning.

"I am getting older and it takes a little longer to get out of bed at the moment," he said.

"We all know the industry is ageing at farm level."

New entrants were there and the UDV had recently hosted a tour group of nine young people to visit farms.

"They are really energised about the industry," Mr Billing said.

"If the older ones can feed off that energy, and provide some support for younger ones coming into the industry, then we will move it forward."

He welcomed the early opening prices as it gave farmers a "pretty good heads up," when it came to budgeting.

"I think the day of processors opening at around 90-92 per cent and stepping up, throughout the year is gone," he said.

"But since the instigation of the Dairy Code of Conduct, we haven't seen supply-demand go the other way, so how will the code behave, with a demand level that is less than what it is now, is one thing we need to consider.

"Even if, at the back end of the season, things get a little bit tighter, we have that confidence that's the price we should be getting.

"The risk has shifted, it is now the processors wearing it if there is a big blip at the back end of the season.

"But we all need a strong, active and viable chain, otherwise we all fall over."

He said he hoped for a five to 10 per cent growth in the industry, in the coming years.

"We will have enough milk for processors to process efficiently and enough growth to keep people interested, to come in," he said.

"We need to have an industry that is able enough to bring new entrants in - because at some point I want to hang up my rubber boots, sit back and see someone else milk the cows."

'We need a healthy, strong, confident industry to grow - if our supply network is not confident, they won't invest, retain herds, or grow," Mr McDonald said.

"I think the industry itself has spare capacity and demand overseas is strong.

'"The opportunities for the domestic market are truly there."

He said fresh dairy sales had been very strong and were continuing.

"In-home consumption appears to be continuing, with flexible work arrangements appearing to potentially be the norm," Mr McDonald said.

"The five-day work week now include a number of days at home.

"Further at home consumption will continue for a while."

"I think the traditional step-up model is going to change, in the sense that a forward price is now here from July 1," he said.

"You adapt to the new environment and work to it and you look at the opportunities that come form there.

"It's working well, we see our suppliers are confident, and hopefully we will get a supply response as a consequence."