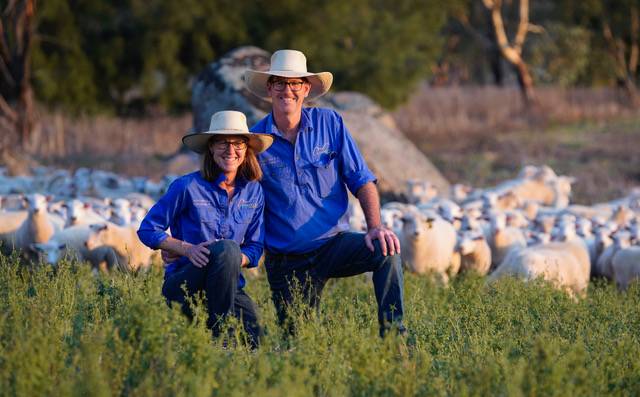 Gundagai Meat Processors, based in NSW's Riverina, has positioned itself as an industry leader when it comes to objective lamb carcase measurement and in May launched its grid offering a 50 cents-a-kilogram premium for lambs with an intramuscular fat measurement of 5 per cent or higher.

The Herberts, based at Eurongilly, NSW, supply about 6000 lambs a year to Coles, with GMP as their processor.

They will send their first consignment through the new lamb grid in coming weeks.

Mr Herbert said he thought GMP's move towards value-based pricing and its use of technologies such as dual energy x-ray absorptiometry and the MEQ Probe was a great thing for producers.

"Really lamb was only ever sold on weight, there was no quality assurance at all and now this has put a new parameter around it," he said.

"It's good to see because that's one thing we have been doing over the past 25 years, working on eating quality, shear force and IMF.

"All of those things are starting to be in the forefront of producers' minds."

"The beef industry has done this many years ago and if you look at the grain industry, they're all paid on quality, not just how many tonnes they deliver," he said.

"I think it's just a natural progression within the sheep and lamb industry that this will happen, it's just that Gundagai are leading the charge, which is good to see.

But for Mr Herbert, the real value in the new lamb grid comes from the feedback he will receive.

"We're a seedstock producer so we produce rams for the commercial market and the data we can get back out of Gundagai Meat Processors is pretty valuable to us," he said.

"It's a matter now of tracing carcases back to their parentage so we can sort out which ones are hitting the grid so we can be more consistent in the type of animals that are going in there and be confident in knowing they're going to hit the mark.

"That's what we will be working on over the next two years."

"There will doubtless be teething problems as it rolls out through different types of processors... how they work in with producers and the feedback they provide, the more uniform we can get that and the further this gets standardised through the meat language standards, the better," he said.

"It's all going in the right direction."

Mr Crisp said there had been a lot of positive commentary throughout the industry about having recognition of IMF and lean meat yield at the processing stage.

"We've just now got to work out how we do this on a broader scale and for enough plants to have the ability to have the technology in place to make it work, so there won't be any discrepancies between the producer and the processor," he said.

"We're not expecting miracles in the short-term but this is a great initiative to say this can be done on a commercial basis and if we can ramp this up so it can work in any plant, then we're halfway home.

"We're lucky that lamb does eat very well and we've got the breeding in place in broad categories but this just makes it a lot easier to make it very objective."

Mr Crisp said value-based pricing could also encourage producers to make changes to their practice in search of premiums.

"A lot of producers will benefit fantastically from this but for some there will be a downside because they realise they're actually not producing exactly the right product and will need to change," he said.

Our annual Carcase Merit publication will be out on July 22, published in The Land, Queensland Country Life and Stock and Land. It will cover GMP's new grid, plus contain many more stories of innovations in processing plants and on-farm profiles of producers targeting certain carcase traits.