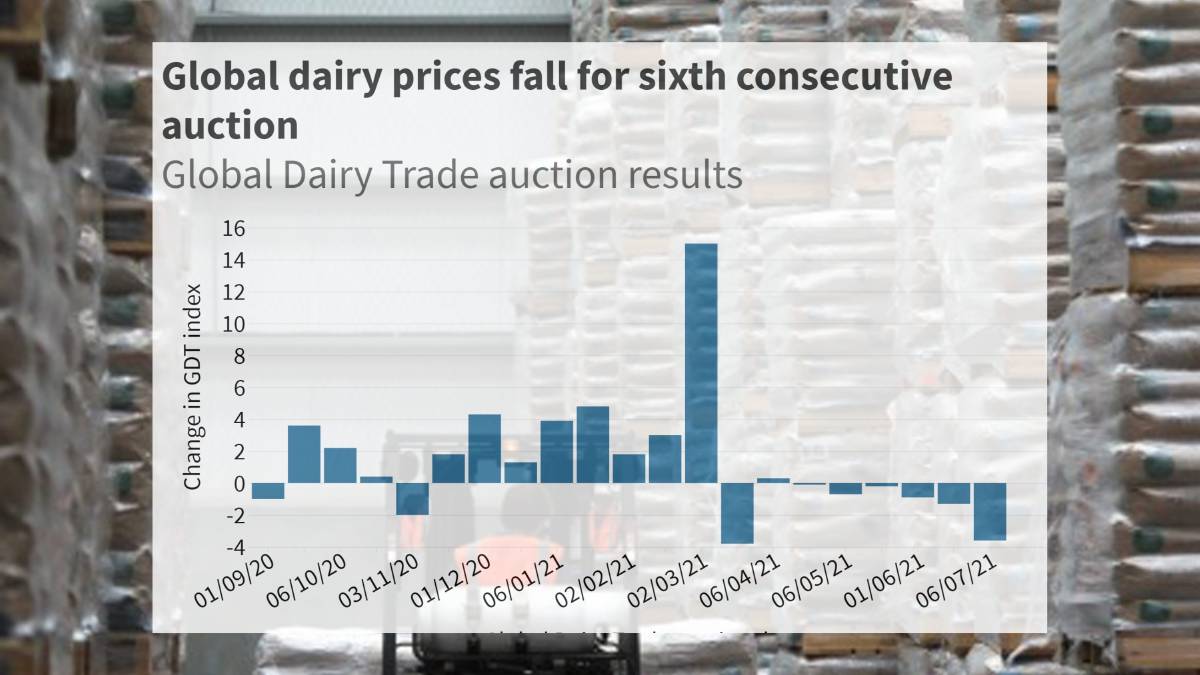 Global Dairy Trade average prices fell 3.6 per cent at auction on Tuesday night, taking the average price to below $US4000 a tonne for the first time since March.

Global Dairy Trade average prices fell 3.6 per cent at auction on Tuesday night, taking the average price to below $US4000 a tonne for the first time since March.

But prices are still almost 20pc higher than at the same time last year.

All commodities except lactose recorded drops - with the key whole milk powder index down 3pc.

Analysts are concerned that the drop was larger than anticipated and seems to be signalling an earlier fall in demand than was expected.

New Zealand bank ASB economist Nathaniel Keall said the price fall was well ahead of the futures market expectations and came despite Fonterra reducing the amount of volume on offer.

"Prices are moving lower a shade faster than we had previously anticipated, and the fact the fall comes despite the fall in volumes on offer is a bearish sign," Mr Keall said.

"This suggests prices have lost a bit of momentum as we head deeper into the new season."

Mr Keall said aggressive Chinese purchases had fuelled the boom in dairy prices this year, as it sought to build up its strategic stockpile in response to booming domestic consumption.

"But there are now signs Chinese inventory is getting closer to healthy levels, and global production (both in NZ and in the northern hemisphere) has lifted in response to the price signals," he said.

"As a consequence, we expect prices to drift lower over the remainder of the season, but the pace and size of the easing is a big question.

"For our part, with global demand and supply still finely balanced, we think a sharp price correction is unlikely."

The decline reflected the big rise in NZ milk production, which in May was up 9.3pc on the same month last year.

"Conditions also look favourable for a good start to the new season," he said.

Mr Clark said there seemed to be an increased reluctance among buyers to pay premium prices.

"Dairy prices had surged earlier in the year because of stronger demand from China, underpinned in large part by an increased focus on health and nutrition amid the COVID-19 pandemic," he said.

But the bank had built this into its assumptions and was still forecasting a healthy NZ farmgate milk price of $NZ8 a kilogram milk solids for season 2021/22.

Mr Keall the result pointed to some downside risk of its forecast $NZ8.20/kg MS price.