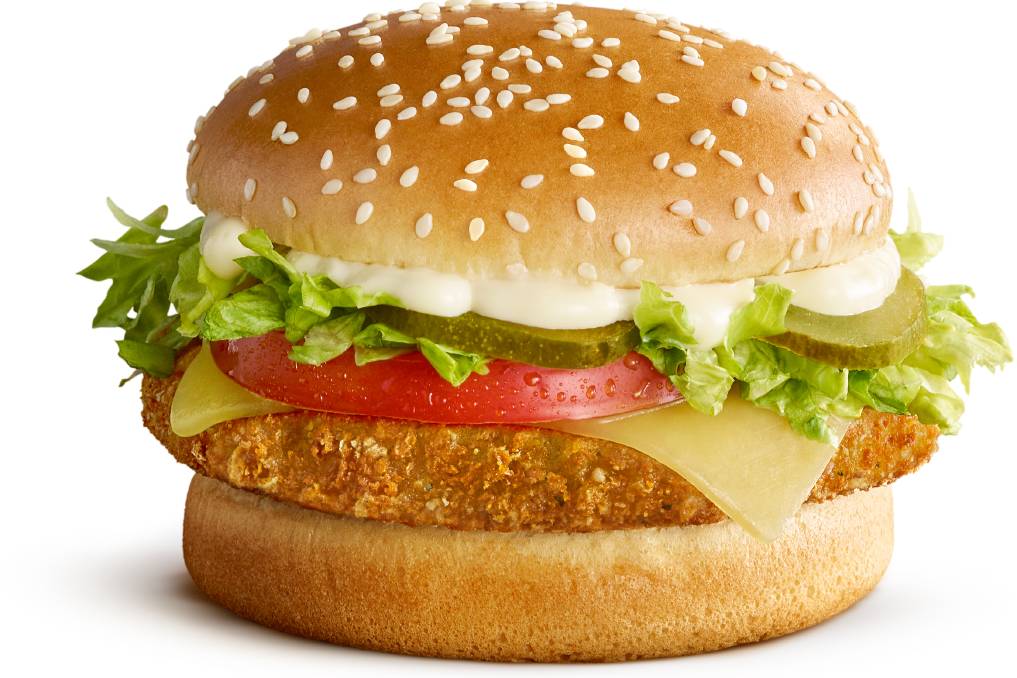 DEAD AND GONE: Unlike many plant-based burgers, it was never designed to be a meat lookalike but McDonald's vege burger still didn't attract the custom it needed to stay alive.

Nobody wants a pea, potato, corn, carrot and onion patty when there's a Big Mac on offer.

JUST how strong consumer interest really is in plant-based meat alternatives has been questioned in the wake of fast good giant Macca's decision to take its veggie burger off the menu.

While the official word from McDonald's Australia was 'we listen to customer's feedback and constantly adapt to give them what they want', Macca's staff said on social media very few people ever bought the potato, peas, corn, carrot and onion patty.

It was launched more than 18 months ago and billed as the 'highly anticipated' first vegetable-based burger for the restaurant chain.

"We know there's an appetite for alternatives to traditional meat proteins and Australians are looking for more plant-based options in their diets," McDonald's chief marketing officer Jenni Dill said at the time.

Marketing experts say it's certainly not unusual for companies to 'test the waters' with a product launch where they identify a possible consumer trend emerging, and then pull it if it proves unviable.

Objective data on demand for plant-based meat alternatives is rare but the lobby group for the sector, The Alternative Proteins Council, says they are projected to generate nearly $3 billion in domestic consumer sales by 2030.

In markets like China and Thailand, demand for plant-based meat products are projected to rise 200 per cent within four years, the council says.

Certainly, there is a plethora of new product launches in the space, with even global meat companies like Tyson and JBS launching plant-based brands.

However, Dr Parkinson said that's not a sign of a flood of consumer movement to these products but rather food manufacturers wanting to ensure they cover all bases.

"I don't believe there is a tsunami of people jumping on the plant-based bandwagon," she said.

"There are other dietary trends running simultaneously, such as Paleo, which is arguably in direct opposition.

"Both are very niche. Combined, they only represent a small part of society."

Dr Parkinson said most of the evidence about the popularity of plant-based was anecdotal.

"There are claims around a COVID-accelerated growth of veganism, but I don't know if that's real," she said.

Equally, there was an argument that COVID had cemented the affiliation Australians have with red meat, based on the degree to which products like mince were 'panic-bought'.

The real extent to which any societal 'turning away' from animal protein production is occurring has also been put under the spotlight as discussion around a new food labelling senate inquiry plays out.

The inquiry is looking at whether plant-based product makers should be able to use words like meat and beef on their packaging.

Comments from a Sydney academic, who argued laws against such labels would not "reverse the tide of public sentiment that industrial meat production has unacceptable costs to our health, to animals, and to our environment" came under heavy fire from red meat industry leaders.

In fact, they demanded an apology from the academic's employer, the University of Sydney.

The university's vice chancellor and principal Stephen Garton responded by saying the institution was deeply committed to academic freedom and that included the right of academic staff to express their opinions and beliefs and contribute to public debate.

Beef producers say there is no evidence of a 'public tide of sentiment' against meat production and other academics, including Dr Parkinson, agree.

Roy Morgan research is possibly the most objective in this space and it shows only 11.2 per cent of Australians had a diet 'all or almost all' vegetarian between 2012 and 2016.

This work also showed the proportion of red meat 'reducers' hasn't shifted, nor has the number of people who identify as vegetarian.