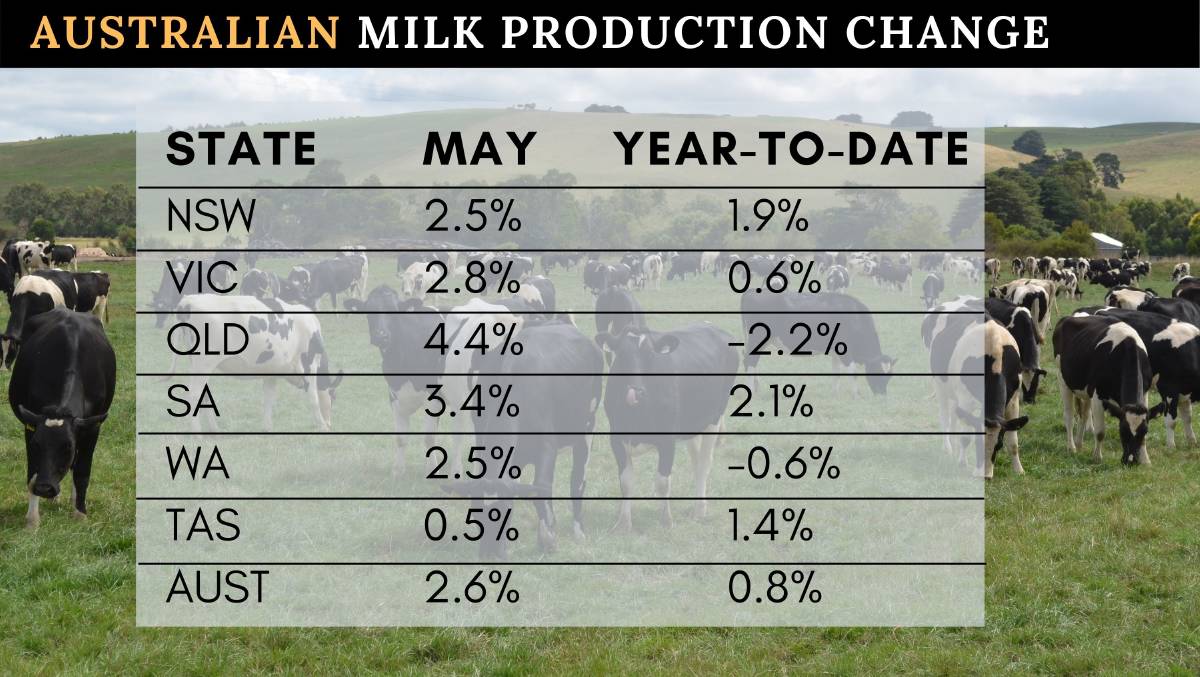 Australian milk production lifted 2.6 per cent in May compared with last year, according to the latest figures from Dairy Australia.

Australian milk production lifted 2.6 per cent in May compared with last year, according to the latest figures from Dairy Australia.

Milk production growth is tipped to be only modest again this season, despite high farmgate milk prices and favourable seasonal conditions forecast for most regions.

The picture is a little different internationally with some regions starting to report growth, while in others production remains flat.

DA's latest report revealed a lift in production in all states for the first time in years.

The year-to-date figures show that Queensland still has some way to go to recover, despite May's big lift.

Production there is down 2.2pc for the year, while WA production is down 0.6pc.

All other regions have recorded modest increases for the year: SA is up 2.1pc, NSW 1.9pc, Tasmania 1.4pc and Victoria 0.6pc.

Analysts are forecasting the modest growth rate to continue in 2021/22, despite higher prices.

"Rabobank maintains a forecast for growth of just over 1.5pc in the new season, supported by healthy margins and plentiful supply of feed," he said.

"The seasonal outlook currently suggest a wetter spring in the months ahead."

"Dairy Australia's initial forecasts suggest 0-2pc growth relative to this year, which would equate to a national milk pool of between 8.80 and 8.97 billion litres," the report said.

It pointed to the large number of farm businesses being in a "steady enterprise phase" as the key factor.

"Despite a significant uplift in farmer sentiment following one of the best seasons on record, Australia's national milk pool remains stagnant," the report said.

"A key factor behind this development is the large proportion of farm businesses operating in a steady enterprise phase.

"While the number of farmers looking to expand their business has grown, almost twice as many are aiming to maintain their current size.

"Additionally, an increasing proportion of businesses are looking towards a maintenance approach for the next three years.

"This suggests that business consolidation, and possibly debt reduction, are considered to be of higher importance compared to growth."

"The US dairy industry has put the foot on the gas," he said.

"Milk production jumped 4.6pc in May, underpinned by herd expansion.

"The New Zealand season finished strongly, with production up 2.7pc on a milksolids basis.

"In contrast, the EU peak has now passed and was mostly underwhelming."