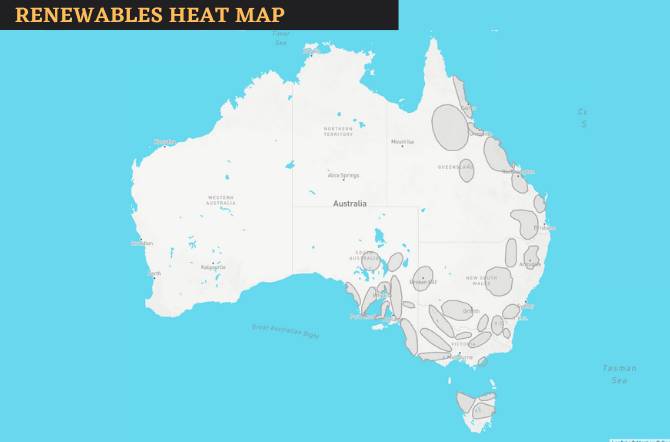 A mix of uncertainty and high pressure sales tactics from a new breed of prospectors is tearing at the fabric of rural communities in government-designated renewables hot spots.

"They'll just start up wherever they can crack a farmer who either doesn't live on the place or is such a bad farmer, they're seduced by the extra income," she said.

"We're not troglodytes. We know we've got to have renewable energy but there are obviously better ways of doing it."

Ms Irving's community sits in a Renewable Energy Zone. It's an area earmarked for large renewable facilities following forecasts that over 26 gigawatts of new grid-scale renewables will be required by 2040.

Most state governments have created REZs that carry incentives to develop wind, solar and other renewable projects in the zones.

Ms Irving's district is being scoped by three renewables developers. One of them, Solis RE, wants to build a 4000 hectare, or 10,000 acre, solar farm with batteries five times the capacity of South Australia's massive Tesla battery.

While only about 5 per cent of proposals are ever built, it's created something of a scramble for poll position, National Farmers Federation chief economist Ash Salardino said.

"There's a first mover advantage because whoever builds the biggest project closest to a transmission line is the most viable," he said.

"As soon as they lock up that project, the project two or three kilometres down the road becomes less viable because the transmission lines only have a certain amount of capacity."

With many renewables proposed for his electorate, South Gippsland MP Danny O'Brien has had plenty of calls from confused and concerned constituents, including for the large Solis RE project.

"People were wanting information, didn't know enough about it, and were concerned about the impacts in their area, and that's fair enough," Mr O'Brien said.

The MP asked the company to call a meeting but finding the right time to consult is not necessarily straight forward, Solis RE executive director King Arthur said.

"We didn't want to make a big song and dance and then not deliver because the community's had enough of that," he said.

"It's that sort of fine line between do you say nothing or do you have to say something."

The district is also favoured by Acciona for a wind farm development and the company's general manager, marketing Emma Reiners said consultation with landowners was not enough..

"You're essentially talking to groups of landowners about what's best for their community," she said.

"We don't play one landowner off against another.

"We're there for 30 years. So if you get it wrong at the start, you've got 29 years of absolute misery being in a place that doesn't want you because you didn't take the time to listen."

"It could be community enhancement funds, improvements to local power supply; a range of different things can be worked out," he said.

It's critical landholders to know their rights before there's a knock at the door, said Australian Energy Infrastructure Commissioner Andrew Dyer, who's seen two types of developers.

"Developers that will develop, build, own and operate the project long-term usually work hard to win the community over and cater for them well," he said.

"The other types of developers are speculators that will lock up landowners into agreements; some agreements might be quite dubious.

"Their goal is to get the project to be permittable or permitted and sell it to a long-term developer."

During the early stages of a project, landholders are often asked to sign a license or "options" agreement that should simply provide the developer to access the land to capture wind or solar data, surveying, or other tasks to check site suitability.

A licence agreement does not guarantee that a project will proceed and should not bind the landholder beyond allowing access during its term, the Commissioner said.

"In the event that a property is eligible and on a preferred site or route, the terms should be attractive enough for the landholder to say, 'Come on in for a discussion, we'd like to have a positive commercial relationship with you to give you a successful outcome here and for us to share in your success'," Mr Dyer said.

Even when governments can compulsorily acquire land for infrastructure like powerlines, Mr Dyer said landowners retain some negotiating power, including the valuation of land and other impacts on the farmer.

"You could cave in or you could fight," he said. "We're seeing time and time again in the wind and solar sector where landholders and/or neighbours have embarked on legal challenges to planning approvals, and have succeeded in their quest either by having the approval quashed or by causing mortal delays to the project.

"Either they've delayed the project so long it becomes unviable or got a court decision to overturn the project's planning approval."

There are plenty of things landowners need to consider before signing an agreement and the Australian Energy Infrastructure Commissioner has a comprehensive listing on its website. Just a few of the topics to discuss are: