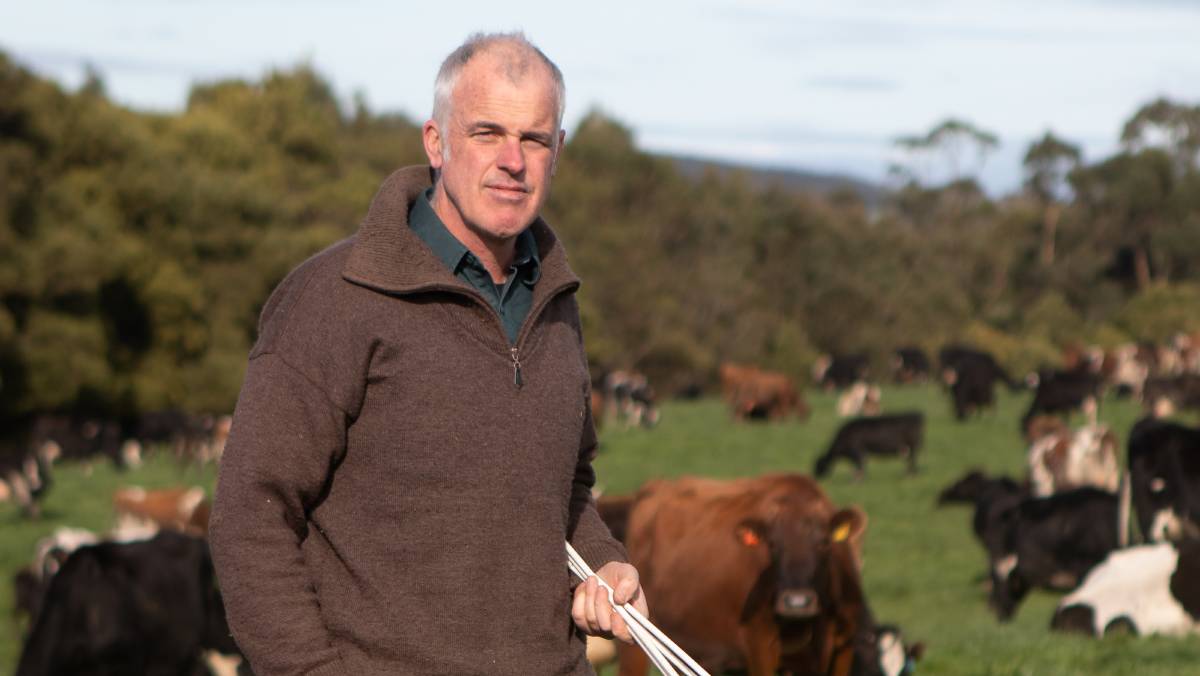 South Gippsland dairy farmer Graeme Nicoll has learnt a lot about resilience in his 25 years in the industry.

Mr Nicoll, who farms in partnership with his wife Gillian at Fish Creek, has had good times and tough seasons but is celebrating his silver anniversary with a positive outlook.

With a good year under his belt and strong opening milk prices, Mr Nicoll says things are looking bright.

However, he's been through enough to know you have to be ready for the hard times.

He's also learnt the benefits of being open to change and new ideas.

Much of his knowledge was gained from undertaking a Nuffield scholarship sponsored by Gardiner Dairy Foundation in 2010 where he studied ways to enhance the resilience of high rainfall dairy systems.

The experiences continue to influence his operation and his attitude towards agriculture.

"If farmers farmed today the same as they did 25 years ago, they probably wouldn't be profitable," he said.

"To be a successful farmer, you need to continue to change and evolve."

The couple run a pasture-focused crossbred herd along with dairy beef as a sideline.

The 250-hectare property includes the farm where Mr Nicoll grew up.

Mr Nicoll is interested in the bigger picture of dairy farming and agriculture more broadly.

He recently returned to the Dairy Australia board to fill a casual vacancy after retiring at the last election and is a former chair of the GippsDairy board.

"It helped me think more broadly about how I approach our agricultural business," he said.

"Once you've seen a lot of different businesses and how they operate, you see opportunities that you may not have seen before and recognise the need to keep moving and evolving the business."

"The opportunity to visit a diverse range of agricultural systems, not just dairy systems, really opened my mind to different concepts and the potential of agriculture," Mr Nicoll said.

His investigation into crossbreeding exposed a variety of systems in New Zealand, Europe and North America.

While seeing the systems at work on farms, he also wanted to understand the science behind them and his scholarship took him to universities, departments of agriculture and research farms.

"A lot of my learnings confirmed the practices we already had in place in Victoria," he said.

"The data behind the long-term profitability of three-way crossbreeding systems was strong then and it remains that way today."

He also looked at the science behind resilience, a popular buzz word at the time that continues to appeal to government funding bodies.

"I looked at the concept of resilience and how it applies to productive agriculture and is challenged by our inputs and outputs," Mr Nicoll said.

"I think we all have a good understanding of what a resilient farm is but it's a bit like sustainability; it's a term that's very hard to tightly define.

"For me, the basic concept is the ability to adapt to change and thrive.

"We're constantly adjusting to different pressures, probably more to external pressures now than in the past, but that's part of the evolution of agriculture."

Along with validating his successful three-way crossbreeding, Mr Nicoll said the scholarship created a helpful network of connections that continued to provide diverse input into his thinking about farming.

"To have connections with people farming in low rainfall areas to growing barramundi in tropical zones and all systems in between is invaluable," he said.

Mr Nicoll said farmers with an eye to the future should consider applying for sponsorship from Gardiner Dairy Foundation for a Nuffield Scholarship.

"I really value the role Gardiner plays in developing people in the industry. The outcomes can be seen in so many people," he said.

A decade after his study, Mr Nicoll said he believed Victoria's dairy farmers remain resilient, adaptive and poised for a strong future.

"The dairy industry is a changing environment but there are some really good opportunities," he said.

"The current aggressive opening milk prices show there is strong demand for dairy products from processors, but we've got to keep working at it.

"To be a successful dairy farmer you have to be resilient and focused on the big picture.

"It can be challenging at times but those attributes are what make successful dairy businesses and why we have so many of them in Victoria."

Applications for the 2022 Nuffield Farming Scholarship are now open at https://www.gardinerfoundation.com.au/nuffield/