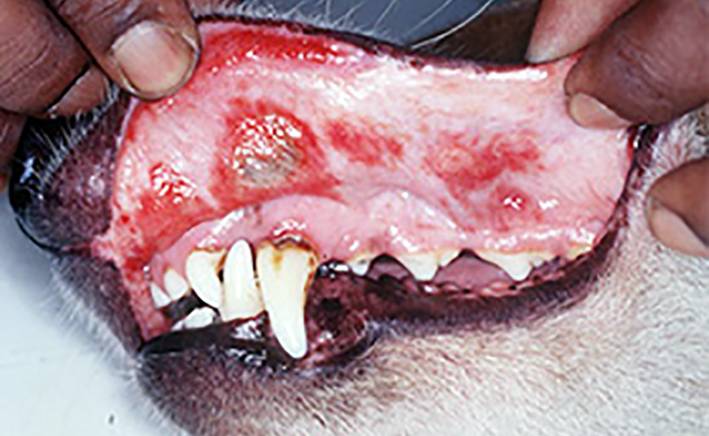 DOG DISEASE: Ehrlichiosis is carried by the common tick and has ravaged dog populations across northern Australia.

The state's Agriculture and Fisheries Department yesterday said the Queensland dog caught the disease after it had travelled with its owners through Western Australia and the Northern Territory.

The tick-borne disease, which has a high mortality rate, was found in Queensland in January but that was from three dogs which travelled to Queensland from the Territory.

This is the first local case.

Numerous infections have been discovered in dogs adjacent to the border where a vet described it "as a war zone".

Queensland MP Robbie Katter failed in his bid last month for roadblocks to be set up along the Qld/NT border to contain the rapid spread of the disease.

There have been cases of ehrlichiosis now in all mainland states which was only discovered in Australia with cases in northern WA a year ago.

Tasmania has gone it alone to set up border restrictions to stop the ticks and disease entering.

Veterinarians and other disease experts have warned cases of the disease would quickly rise after the return of tourists who have piled into the NT to enjoy the dry season weather and escape pandemic restrictions elsewhere.

Ehrlichiosis is now considered by most to be endemic in the Territory where thousands of dogs have succumbed.

A Queensland government alert this week said if people were moving their dog from an area where the disease is known to be active, they must assess your dog's health before entering Queensland.

"People moving or bringing dogs from interstate or adopting rescue dogs are advised by the department to ask questions about where the animals came from, their health status and what tick prevention they have been on prior to bringing them to Queensland," the alert states.

"Human-assisted movement of dogs is considered the most likely means of introducing E. canis (ehrlichiosis) to Queensland."

The department said the areas where ehrlichiosis "is known to be active" is the the entire Northern Territory, the Kimberley and Pilbara regions of Western Australia and northern South Australia.

The common brown tick is the vector of the disease, able to infect a dog in less than an hour.

Territory vets say ehrlichiosis is a horrifying disease for which there is no vaccine and are urging dog owners to adopt two forms of tick prevention.