Keeping a regular close eye on costs has helped a young dairying couple in New Zealand succeed as sharemilkers and win a major award. 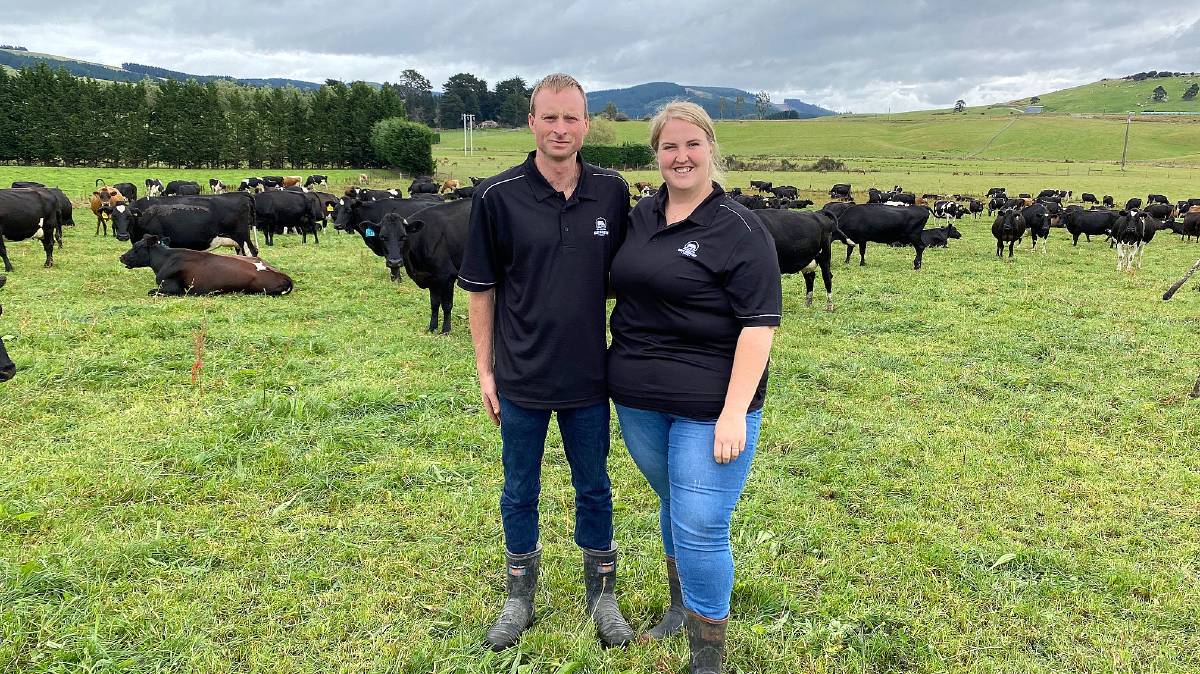 Keeping a regular close eye on costs and herd performance targets has helped a young dairying couple in New Zealand succeed as sharemilkers and win a major award.

Scott and Ann Henderson, both 29, are currently in a 25 per cent sharemilking contract but have come a long way since starting out to manage the farm and are aiming for a 50pc contract by 2023.

Born and bred on a beef and sheep farm at Fauldhouse in Scotland, Ann Henderson and her husband Scott, from South Otago, have just won the Southland-Otago Dairy Industry Awards Share Farmer of the Year for 2021.

"Winning the competition has been invaluable to us as the contacts we have made and the publicity we have had from it has been huge," Mrs Henderson said.

She said an important part of their business success was monitoring key performance indicators (KPIs).

"On our farm we monitor KPIs using our accountant's client base statistics and DairyBase statistics," she said.

"We decide what costs we can save on if required or if we will need money in a different area for the season such as needing to purchase new equipment."

In 2012 at the age of 21 and after spending a few years milking cows in Scotland, Mrs Henderson was lured to New Zealand to gain more experience in dairying.

There she met husband-to-be, Scott, a carpenter from South Otago, who had little farming experience but who has quickly learned.

Since 2017 the duo have followed a business plan to become 50:50 sharemilkers on the farm they currently work on and aim to own all the cows in the herd by the 2022/23 milking season. They then aim to buy a 600-cow farm within 10 years.

The farm, owned by the Whitestone Trust, extends to 560 hectares, of which 340ha is used for the dairy herd.

"It has been a dairy farm for the past 23 years and we are currently on a three-year 25pc sharemilking contract," Mrs Henderson said. "We already own some cows in the herd but it is our ambition to own the full herd by June 1, 2022, and enter into a 50:50 sharemilking contract.

"In our 25pc contract, we pay for the labour, electricity, shed chemicals and rubber wear, gear and maintenance, as well as 25pc of the in-shed feeding. The farm owner pays the rest. In return, we receive 25pc of the milk cheque. In a 50:50 arrangement all costs and income are split equally."

The Henderson have their own company, called Way2Milk Dairies. "On this farm we are semi self-contained, so we have 850 milking cows, 210 calves and 210 yearlings, 60 empty carryover cows and aim to run 2.5 cows per hectare," Mrs Henderson said.

"The farm is rolling to steep contour with main soil types Waitahuna, Warepa and Tauratu, which are all clay based. Our annual rainfall is about 820 millimetres per year."

"Danone fixes half its payout for two years and the other half floats on Fonterra," she said. "We milk cows from July 20 to May 31, after that they are dried off. Half the cows, with the yearlings and calves, winter on the farm and the other half go to grazing."

Mrs Henderson said their annual production target was 320,000 kilograms milk solids, but this year they were on track to do a record production of 345,000kg.

"Cows feed on grass during the milking period, along with 235kg of barley each per year to help the energy intake," she said. "We make as much silage as the weather allows us to each year, which can be very variable depending on the climate. This year we made 250 tonnes dry matter but last year was only 80 tonnes so we do have to buy some in. Cows are fed 19kg DM during the milking season."

Mrs Henderson said they measured grass weekly with a plate meter to record growth rate and pasture cover, which allowed them to make decisions early.

The couple plant 30ha of fodder beet to winter the cattle on and make 1000 bales of baleage, either made on farm or bought in. A further 20ha of summer turnips are fed at 4kg/cow from early January to March.

The dairy is a 60-unit rotary with automatic cup removers, auto drafting and teat spraying.

"We milk twice a day from August until Christmas then we go to 10:7 milking, which means milking at 4.30am and 3pm on a Monday, Wednesday, Friday and then milking at 8am on a Tuesday, Thursday, Saturday, and at 6am on a Sunday," she said.

The cows are kept outdoors all year round, and there is a calving pad that holds 250 cows. Artificial insemination is used across the herd first and then Hereford bulls sweep up. The Hendersons rear 23pc replacements each year and a Jersey bull is used on the yearling heifers.

The farm employs three full-time staff, a Chilean, a Kiwi and a Filipino. "All have their own house on the farm and are treated as our family," Mrs Henderson said. "We have weekly meetings to cover everything that is happening on farm and what is coming up."

Diseases and lameness are the biggest problems on the farm with Mycoplasma bovis posing the biggest threat.