USING EXCESS: Excess feed at Joseph and Anna Conheady's Garvoc, Vic, dairy farm was made into cost effective pasture hay thanks to the preservative Hay Guard.

Joseph Conheady had a predicament. It was early December and the heavy, flat country at his Garvoc, Vic, dairy farm had only just become passable for machinery.

The ryegrass was long, and the quality had declined with the paddock locked-up during the wet south-west Victorian spring.

Rain was never far away either and it was tough to get a string of dry days for harvest.

"At this stage we would have been paying quite a bit of money to make pit silage, essentially with fodder that had gone past its best," Mr Conheady said.

"Despite how good you are at making pit silage, it was never going to be the best feed and the whole idea of silage is to harvest it earlier in spring and make high quality feed. That window had gone, and I was thinking about other ways we could store that feed without the great expense."

His solution was to cut the area for pasture hay and apply a preservative called Hay Guard during the baling process.

The product, applied by the hay contractors, has been formulated to maintain the quality of the fodder and assist with shortening the time between cutting and baling. 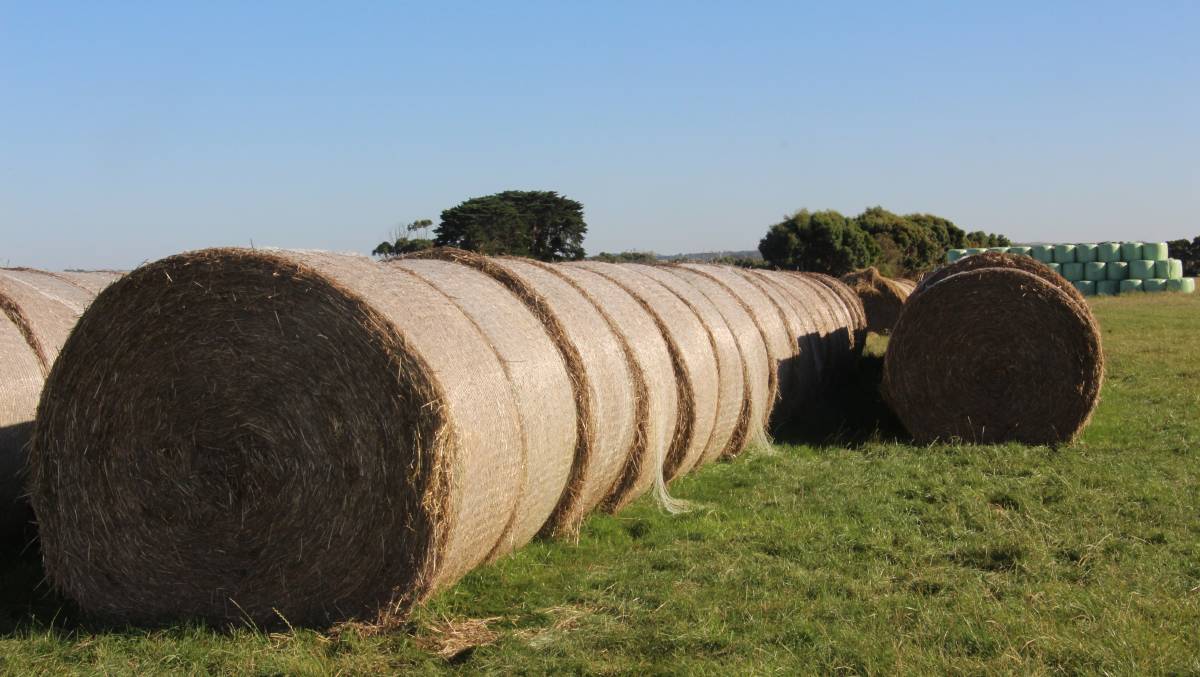 About 25 per cent of the Conheadys' hay made last spring included the preservative - about 75 dry tonne. The remainder of the paddock was baled on the same day without Hay Guard.

There was five days between the cutting and the baling of this hay, with the conservation process included tedding.

Feed tests showed the fodder treated with Hay Guard had a neutral detergent fibre (NDF) of 56.5 per cent compared with the fodder without the preservative which had an NDF of 66.2pc. The metabolisable energy of the treated hay was 9.53 megajoules per kilogram compared with the untreated hay at 8.6 MJ/kg. Protein tests across the hay were similar for the two groups.

The Conheadys will milk 615 cows this year - down from previous seasons - as they move to reduce their business risk profile.

Increasing the quality of the fodder they produce on-farm will help this, but it won't negate the need for bought-in cereal hay and grain.

It's only early days, but Mr Conheady said there could be a place in his farming system, at the end of spring or during wet harvests, for the strategic use of Hay Guard.

"The reality is silage can be $100-$120 a tonne to put into the pit, the question is 'can we do it for $50-$60 instead?'" he said. "'And still get, essentially, the same quality outcome even though we are still getting quite rainy Decembers?' If it makes it possible, that's a great saving."

Hay Guard Australia and New Zealand product specialist Mark Lourey said making silage from pasture at that time of year at Garvoc would not have increased the quality of that feed.

"It would have been more expensive to make into silage and wouldn't necessarily have changed the protein and energy," he said. "Maybe the NDF would have been lower and that's where there might have been a gain - if it was cut for silage - but it's really hard to speculate.

"At the end of the day, wrapping the feed in plastic for silage - a day after it was cut - is never going to increase its value. The plastic retains the value of the feed, the same as Hay Guard, but Hay Guard costs $8-$10 a tonne, so it is more than half the price of silage."