Urea prices are likely to remain high and supply tight as demand for product continues in light of strong crop prospects. Fertiliser stocks are likely to be tight over coming months.

DOMESTIC supply and demand will be the major factors in determining how much further nitrogen fertiliser prices rise over coming months.

Good yield potential in this year's winter crop, combined with high grain prices means farmers will be on the hunt for nitrogen-based products such as urea to maximise their yields.

It is notoriously hard to get a generalised estimate of urea prices across the country, but in most places it is well in excess of $700 a tonne with farmers in some areas budgeting to pay in excess of $800/t for any new product they have to order.

Brett Hosking, Grain Growers chairman, said while farmers were disappointed to see input costs rising, getting hold of the product in a timely manner was a bigger priority.

"No one wants to see prices go up and it is certainly getting dear enough but if we can get the product when we need it given the potential the crop has that would probably be the main thing," Mr Hosking said. 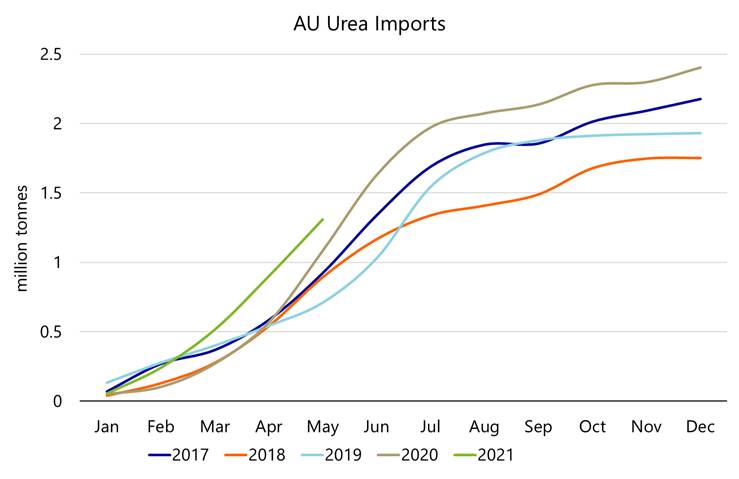 Australia has been importing urea at a voracious rate in 2021. Source: CRU / Rabobank.

In the Australian instance he said at the end of April urea imports were up 59 per cent year on year, falling to 21pc at the end of May.

"This is reflective of early and strong demand for product," he said.

Mr Lefroy said many Australian growers had locked in prices earlier in the year, not so much as a means of controlling price but to guarantee supply.

"Given the supply chain disruptions people moved away from just in time orders to just in case orders, so it is more going to be this second lot of demand emerging for spring use where growers will be more exposed to rising prices," Mr Lefroy said.

He said prices had risen to the extent where urea was now worth more than two tonnes of APW wheat at Kwinana in Western Australia.

"What you can see there is that fertiliser prices are rising faster than grain," he said.

He said this price ratio was the highest price for urea since 2011-12.

In terms of supply, he said while there were more ships coming in, it was likely to remain tight.

"I think it will remain tight especially with a longer season of use with the good cropping season seeing top-dressing stretch right into September in the southern states and then you have the use in other industries such as dairy," he said.

"We might see short-term situations arise where people will find it difficult to source supplies immediately."