A bioenergy project for Nowra will put "poo power" and food waste into the electricity network.

A bioenergy project for Nowra, NSW, will put "poo power" and food waste into the electricity network.

Federal Minister for Energy and Emissions Reduction, Angus Taylor was in the Shoalhaven on Tuesday, July 27, and visited the site of the Nowra's biogas plant and talked to some local dairy farmers.

He heard how tonnes of food waste will no longer go onto landfill but instead will be used to help make electricity when combined with manure collected from 19 local dairy farms.

Mr Taylor also announced the second round of funding [$25 million] for 20 similar energy projects across Australia.

"It's focused on providing affordable and reliable energy," the Minister said.

"This is technology - not taxes at work.

"It's practical projects that will bring down the cost of power and bring down emissions at the same time supporting great industries like the dairy industry here in Nowra."

The minister visited the Menzies Farm on Jindy Andy Lane to make the funding announcement.

Mr Taylor said the Nowra project would reduce the cost of energy for the 19 dairy farmers involved.

Some green waste will also be used in the project

Food waste combined with manure increases the amount of gas the operators can get from the process.

It will use 125,000 tonnes of manure from the farms and 30 tonnes of food waste will be added to it

"With the new requirements that will prohibit the use of food waste going to landfill this will be a very beneficial part of what we are doing here," Innovating Energy Director Phil Horan said

The process will produce methane gas which will run large generators which will, in turn, generate electricity. 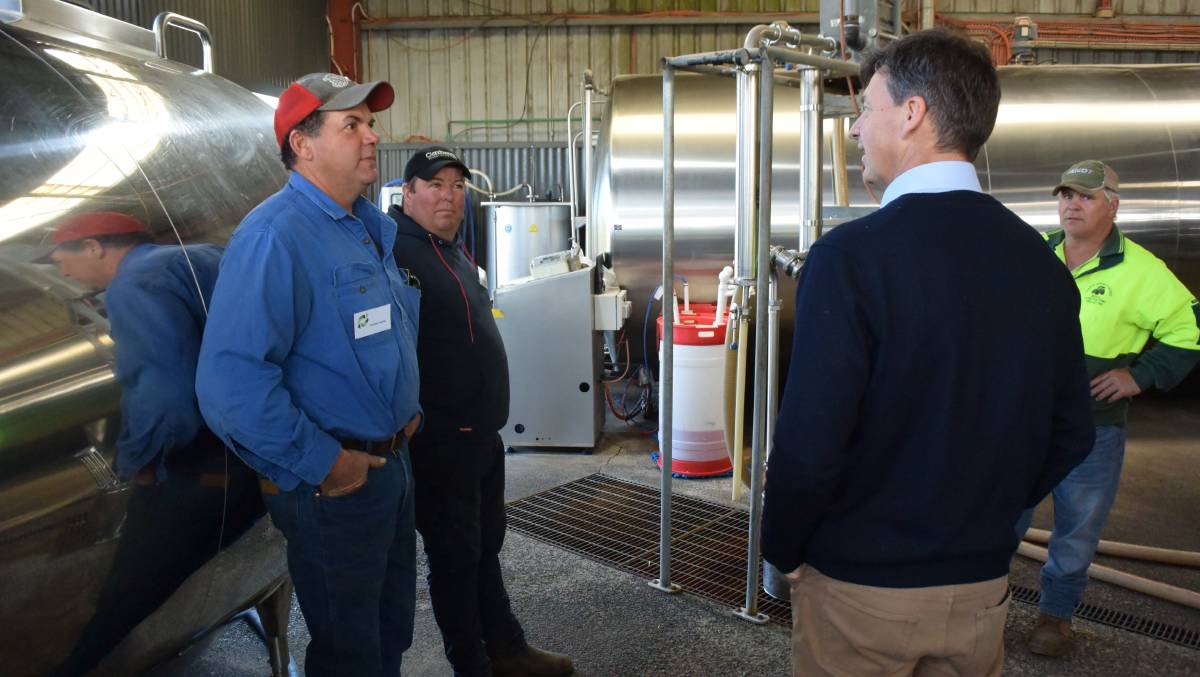 Mr Taylor congratulated the Innovating Energy team for putting the project together, while Mr Horan thanked the Federal Government for its support.

"The project has gone from being one farm involved in the project to 19 farms in the area," Mr Horan said

"We now have 19 farmers all working together in a collaborative effort supplying manure.

"We will be getting food waste from the local area as well (club, pubs and hospitals etc] and adding that to the manure and generating electricity.

"We were fortunate enough to receive a grant from the Federal Government which has allowed us to establish the project - it's a significant grant which will allow us to get things going."

Mr Horan said the total cost of the Nowra project was $17 million and will take around 12 to 14 months to become fully operational.

Sponsored by
Using data to optimise irrigation practices.
Test
A needle that uses a miniscule camera to measure intramuscular fat instantly could be commercialised within three years, if a team of South Australian scientists has their way.
Test
The National Code for Boarding School Students will allow travel for boarders and their families to become easier.
Test
The Nationals are sharply divided over a 2050 net-zero emissions, with a senior MP taking "some time away" from the party room.
Test
Wool market hits positive territory with strong bidding for non-mulesed types and increased demand from Europe top-makers.
Test
A huge, shovel-ready poultry proposal in the Griffith area has hit the market.
Test
Swedish car-maker Volvo is ditching leather seats as part of an environmentally friendly makeover for its new fleet of electric cars.
Test
Van Dairy plans to develop a packaging factory at Somerset and a powdered milk factory at Woolnorth.
Test