A PASSION for livestock and life outdoors almost seems to be a birthright in the Martin family. A PASSION for livestock and life outdoors almost seems to be a birthright in the Martin family from dairy farm Bengowrie at Myponga, SA.

For the past 90 years, the family has been farming on the South Australian Fleurieu Peninsula, with third generation Craig and Gayle Martin and their daughter Samantha the latest to manage the property.

The family milk about 240 cows, but their enthusiasm for animals extends even further, with a menagerie of dogs, goats, sheep, rabbits, fish and "too many pet cows", according to Craig.

The Martin family first came to the Fleurieu in the 1930s, when Charles and Dorothy Martin (nee Simon) made the shift to what was then a scrub block with few amenities.

Previously, Charles had been managing a station near the Flinders Ranges, while Dorothy lived in Norwood with their children, growing vegetables and "milking the odd cow".

Charles would return to visit his family "every now and then", according to Craig, but eventually Dorothy "might have given him the ultimatum" to find somewhere closer to settle down.

This resulted in them buying the 400-hectare block on the outskirts of Myponga, and building a house - enclosing the veranda for a room each time they had another child - all up two sons and three daughters.

At the time, they were milking Ayrshire cows in a dairy built from packing crates, as well as running sheep.

Craig said at this time, the block was so basic that if they needed water, someone would have to head to the nearby creek.

While dairy has been constant, it was sheep that were the passion of the second generation, Ian Martin.

Ian was eight years old when his family moved to the farm, and eventually went on to take over the operation.

He was a woolclasser by trade, and travelled frequently for work, particularly during the depression, sending money back to his parents at Myponga.

It was while travelling and classing that he met Beth Warwick, a nurse from Wilcannia, NSW, who he married in 1950, moving back to the family home.

During Ian's run, as they were still working to clear the block, they were running about 500 ewes for prime lamb production and milking 15 cows.

Ian and Beth had three children - Christine, Barb and Craig.

In time, it was Craig's chance to strike out and experience something of the world.

He spent two years working in the Mallee on a wheat, sheep and pig farm.

"It was one of the best decisions I've ever made, just to get away and see how other people lived," he said.

"I think it broadens your outlook on agriculture, otherwise all I'd ever seen is a cow's rear.

"At least this way I could see a pig's rear and some stumps."

Related reading:Boltos backed by wool through thick and thin

The time on a wheat farm also sparked his appreciation for cropping.

Craig says it was always a given that he would return to the farm.

"I was never going to be anything else but a farmer," he said.

"You've got to have the passion for it."

He met Gayle Redman, who had moved to Yankalilla with her family at a young age from Naracoorte, in 1980.

"Yankalilla to Myponga was about as far as the old farm ute could go," he said.

While it was something of a change for Gayle, who despite growing up in the country did not have a farming background, she quickly grew to love the lifestyle.

"When I first moved here, I didn't know anything about farming and I used to sit and watch Craig milk," she said.

"Then Craig would play cricket on Saturdays so I started to get the cows in and milk."

Over time, her role on the farm grew - even with three sport-loving daughters - and she took on the bookwork.

"I've enjoyed bringing the girls up on the farm - it's a real positive thing," she said. 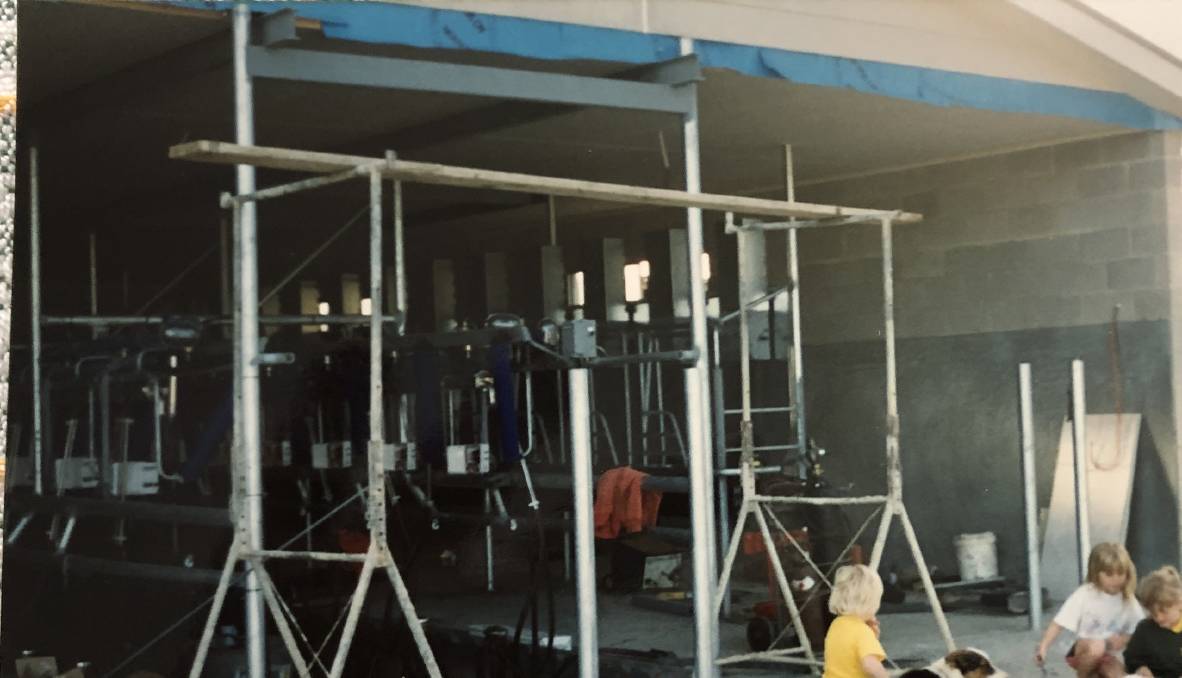 WORKING HARD: Abbey, Samantha and Claire Martin doing their homework while milking goes on in the background.

While all three daughters - Claire, Abbey and Samantha - enjoyed growing up on the farm, Samantha was particularly enamoured by the life.

"I always loved it, ever since I was young, I much preferred to be out on the farm than doing anything else," she said.

She started out helping feed calves and shift irrigation pipes, but once she got her own motorbike at nine, she had cemented her role as "grandpa's lackey" and was "always out shifting sheep with grandpa".

Despite this early introduction to sheep, the decision was made to focus on dairy production and reduce sheep numbers when Craig took over, although they maintain a small flock of about 50, mainly "for the fridge".

After starting with Ayrshires, and then trialling Jerseys, the Martins now milk about 240 Holstein cows, on a split-calving in spring and autumn, in a 14-a-side double-up Herringbone dairy - the fourth dairy to be built on the farm.

Just as had happened with her great-grandfather, grandfather and father before her, it was Samantha's turn to head out into the world.

"We always knew she'd come back when she was ready," Gayle said.

"I'd come home for a bit and then go away again," Samantha said.

It was on one of her trips home that cupid struck.

Her sister Claire had met Yorkshireman Simon Wilks, who was travelling Australia on a 12-month visa with his best friend from childhood Ryan Gardner.

After they had been dating for about six months, Samantha came home and met Ryan.

They now have two children - Daphne, 4, and Beau, 1 - while Claire and Simon have since married.

Ryan said farm life was a bit of a culture shock, but in many ways the countryside reminded him of home.

He works in Myponga, but helps out with milking when needed.

He also has a growing herd of goats.

With Samantha back on the farm, new roles have been developed.

Craig is able to focus on the pasture side of the operation, while Samantha works with the cows.

She does most of the milking, sharing the duties with brother-in-law Rudy Francheschinel (Abbey's husband - a trained chef from Italy, who has also embraced farming life).

While they have traditionally had access to irrigated crops during summer, for the past two summers they have shifted away from irrigation, and are focusing on silage and conserving home-grown feed.

She said there are some benefits with the shift away from irrigation, meaning no trips out to move pipes on Christmas Day.

In the past few years they have been working to improve their paddocks and pastures.

"The key in dairy is to grow your own feed," Samantha said.

"Now we're not actually farming milk, we're farming grass, which has been a real paradigm shift."

In the next generation, there are already signs of that family passion for animals and the outdoors.

Samantha says Daphne spends one day a week on-farm, while "Beau loves it, you can tell".

"Daphne knows how many calves are in the paddock," Gayle said.

Samantha said it was great to think of her children growing up around the dairy, as she did.

In 2017, they began selling their milk to local business Fleurieu Milk.

Samantha said there was something cyclical about the way the dairy industry has shifted.