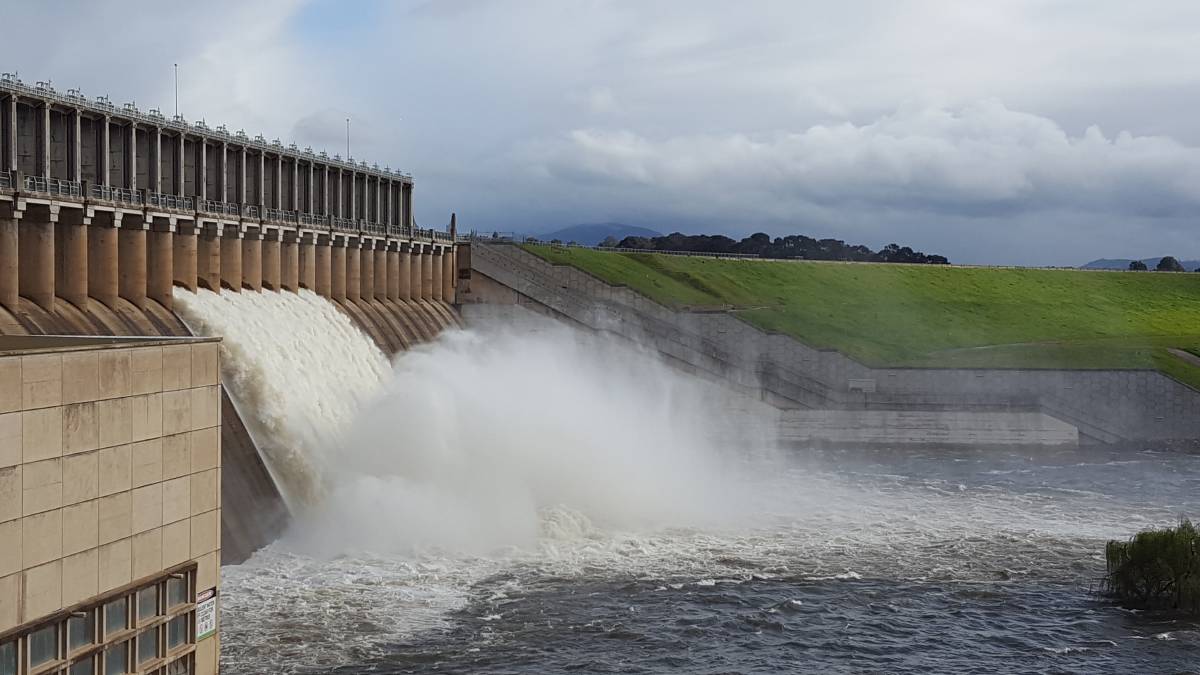 HUME DAM: The Hume Dam is now at 80 per cent capacity. It spilled in September 2016.

The dam is currently 80 per cent full, with positive signs from the Bureau of Meteorology for more rain in August and into spring.

'They will be well within the channel capacity downstream, so they won't have any real impact on people downstream," Mr Reynolds said.

"Given the outlook, we have a fair degree of confidence the Hume Dam will fill, this year, and there will be a spill from the storage.

"At that level, we still have significant air space available to us, in the vicinity of 600 gigalitres, to use to manage floods."

Bureau of Meteorology Water and Agriculture general manager Matt Coulton said there was confidence there would be wetter than average conditions, in the coming months.

"Conditions in the catchment are very wet and the rainfall outlook indicates we are going to have wetter than average conditions, for the next few months," Mr Coulton said.

"Upstream of the Hume Dam the catchments adjacent to the upper Murray River are wetter than they have been for several years, and it won't take very much rain to produce quite a rapid response in river levels."

Mr Reynolds said the MDBA would look at historical records, as part of its basis for managing the dam and what volumes might come into the storage in the future.

"If, and when the dam, fills in the coming weeks or months, if we get large flows, we will have to pass those through the storage," he said.

"It will continue to be a juggling act of managing some airspace and inflows coming into the storage."

He said the MDBA would seek to manage the airspace, to limit flooding, where it could.

"The challenge for us is (what happens) when we use that airspace and we get a significant inflow in the next little while.

"Then if we get a follow up event, which is what happened in 2016, our capacity to mitigate that is going to be more limited."

He said since the 2016 flood, the MDBA had improved its ability to understand what the outlook might bring.

"Those irrigators downstream have had a couple of leaner years and are looking forward to the prospect of a healthy allocation and a good productive season," Mr Reynolds said.

"We will continually reevaluate where the storage is at."

He said the predicted wetter conditions could mean steady inflows, similar to those happening now.

"The storages will fill, but with relatively little impact downstream," he said.

"The issue comes to us if we get a full storage and a really heavy wet period, over several days, or a rainfall event followed by another one

"That generates a much higher peak inflow that we have to pass.

"The outlook we have does not tell us if we are going to have an event like that, it just tells us it's going to be wetter than average over the longer run."

He said 150 millimetres fell in a few days, in 2016, followed up by a similar event a few days later.

"What we are seeing 20-30mm rainfall events and a few days later the same, so a quite different pattern of rainfall."

Mr Coulton said the catchments were not "quite as wet" as they had been in 2016.

"But they are pretty close," he said.

"In terms of the outlook, the negative Indian Ocean Dipole we had in 2016 was one of the strongest on record, the current event we are having isn't quite that strong.

"But the climate drivers we are having at the moment are similar - that doesn't mean we are going to have a wetter year, it means its going to be wetter than average."