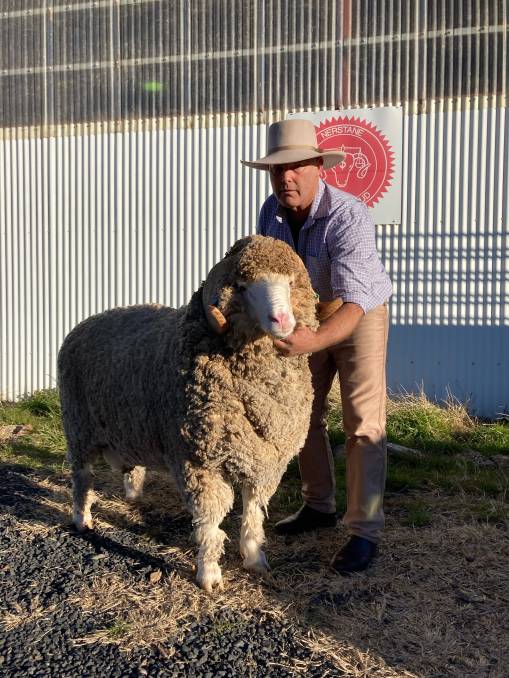 SALE TOPPER: N161, which topped the Australian Sheep & Wool Show ram sale, is described as proud and with "a foot in every corner" by Nerstane stud principal Hamish McLaren.

AN ANIMAL sired by the 2017 Australian Supreme Merino Ram of the Year at Dubbo, NSW, has been sold for the top price at this year's Australian Sheep & Wool Show online Merino auction.

The sale was held on AuctionsPlus after the Bendigo show was cancelled due to Victoria's recent lockdown.

There were 49 active online bidders, with 35 successfully purchasing rams.

"I think he has a real balance of structure and good, even figures," Mr McLaren said.

"That's along with a really crimpy, white wool, which is a really well-stamped 66's count crimp."

He was bought by Australian Wool Network Hamilton on behalf of clientsElwadi Partnership, Gritjurk.

In the catalogue, N161 was described as having an almost perfect stance.

"He is so proud and always has a foot in every corner," the notes said.

Mr McLaren said the cancellation of the ASWS was disappointing.

"We got to Deniliquin, NSW, 11 hours from home, heard the news, did a u-turn and came back."

He said he was surprised at the price.

"I would have been hoping for a price like that if the sale was live, and everyone got their hands on the sheep," he said.

"You need to get sheep into the paddock and put a very realistic reserve on them."

Elders stud stock auctioneer Ross Milne said the sale went well, "considering what was against us".

"Turing to an online format made it very hard for buyers to get a good look at the rams, so it was a pretty good outcome," Mr Milne said.

He said the outcome was a positive sign for the upcoming sale season.

"There are not many things going against it at the moment," he said.

"The season is very good across the eastern seaboard, the wool job is in as good a position as it has been for a long time and mutton and lamb prices are also very, very good.

"Everything is heading in the right direction."

Described as having a "tremendous outlook, great neck extension with a long, flat, topline", the August 2019-drop ram was bought by George Gatenby, Campbell Town, Tasmania.