Texas Angus female sale, following the day after their Australian record bull sale, provided those in the bidding barn with another spectacular result - selling 101 of 103 cows with, or in calf, to average $13,069.

The top bid of Friday's female sale went to Boambee Angus stud at East Seaham on the Williams River, lower Hunter, waving down $65,000 for the five year old Texas Undine M508 by KC Haas GPS from the highly regarded Texas Undine Z183 who delivered a million dollars worth of bulls, not counting the value of her daughters. M508 is a full embryo transfer sister to Texas Mount K2 and was artificially inseminated to Sterling Pacific and backed up naturally by Texas Brad Pitt Q065. She presented with a heifer calf by Paringa Katapult.

Boambee stud manager Jamie Grosser said he and stud principal Margo Duncan "fell in love" with the highly regarded dam before they arrived at Doongara north of Warialda.

"We have used her genetics sourced through other studs. That female has everything we want, and what our clients want. She is well bred, her figures are even across the board and she is backed up by a good family line. The fact that she is a favourite cow of the Mayne family made us all the more interested.

The underbidder on the top priced cow was Merit Angus stud at Molong which won the bid on Texas Undine M533 by KC Haas GPS for $30,000 with stud principal Stuart Hobbs emphasising the importance of females that had already "done the job" to bring new cow lines to his herd.

Friday's event was very much a reflection of the Tex brand with stud principals Ben and Wendy Mayne saying they hoped those females would carry on their reputation into new lines of future stud cattle.

"These cows are the number one reason why we had a bull sale like we had," said Mr Mayne. "They are at the heart of our herd. This is not a reduction sale. Every cow has a history. In five years time we want to hear that they are the heart of a new herd. " 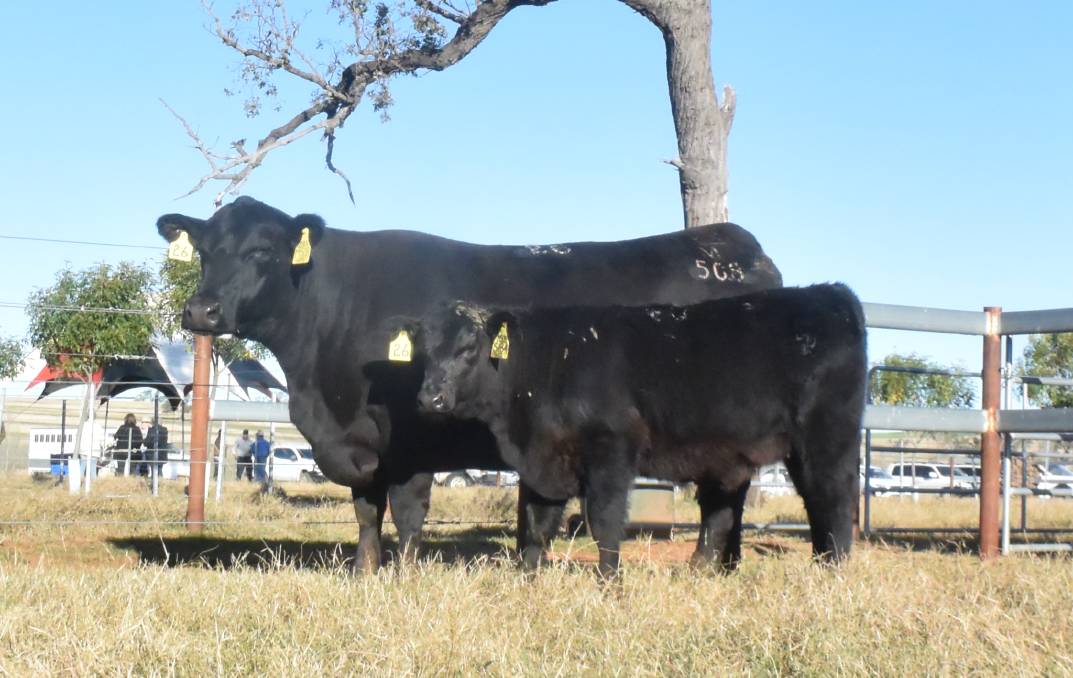 The money earned from both sales will go towards paying off the debt of purchasing new land so that the stud can continue to produce future sires with greater certainty.

Volume buyers were South Gippsland stud Moorunga Angus, which purchased 11 lots totalling $204,000, paying to a top of $34,000 for the stand-out heifer Texas Usherette R226 by Sydgen Bonus 8084, 12 months with figures for carcase quality including +8.9 for eye muscle area and +3.3 for intra muscular fat.

Another Victorian enterprise, McRae Pastoral, Alexandra, with interests at Goondiwindi paid to $45,000 for the two year old Texas Undine Q258 by GAR Ashland - artificially inseminated to new Texas sire line Varilek Geddes and backed up by Texas Brad Pitt and Coonamble P58. This heifer's figures were rather remarkable with +14.6 EMA and +3.3 IMF with low birth weight at +4.1 and +148 for 600 day growth.

Tony Rutter, Cottage Creek stud at Tarcutta via Wagga Wagga, flew in and landed on a neighbouring paddock air strip to buy three donor cows to a top of $45,000 for Texas Undine M113 by RB Tour of Duty 177 from the great Z183.

The long bodied, wide pinned heavy, deep bodied five year old cow will, like the other purchases, be used as a donor for IVF embryos, joining the likes of Wattletop E295, originally purchased as a sale-topper by Gerald Spry from Lock Roger's Angus stud dispersal sale in 2017. Mr Rutter purchased the cow earlier this year and has successfully netted 20 pregnancies from her with the intention of supplying seedstock bulls to commercial producers.

"I was looking for three high quality donor cows from the Texas sale," he said. "M113 had good numbers and phenotype. It is important to buy genetics from the top of the tree, not half way up. I believe you buy the best from the best and hope for the best."

The sale was conducted by Ray White GTSM, Grant Daniel and Long (GDL), and BJA Stock and Station Agents. Auctioneers were Michael Glasser from Ray White GTSM with Mark Duthie and Peter Brazier from GDL

Elite Livestock recorded strong interest, with 81.5 per cent of lots having an on-line bid, claiming more than 33pc of sales, or more than $483,000.

Where did Macka's come from?