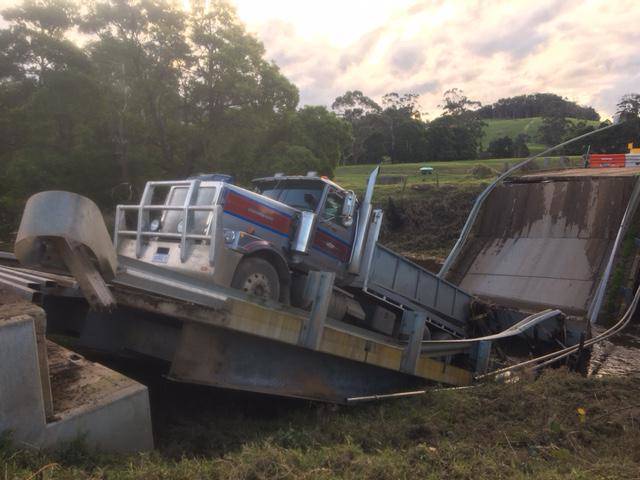 Lucky escape for truck driver: This bridge south of Simpson collapsed while a farmer was driving over it. It will now be replaced. Picture: Darren Ferrari

Up to $600,000 will be spent on an emergency bridge replacement after the structure collapsed while a farmer was driving over it last month.

South-west farmer Kevin Ferrari had a lucky escape when the Burrapa Road bridge collapsed underneath his truck on June 16.

While he was fortunate to escape unscathed, it meant his herd of about 550 cattle has been separated on both sides of the bridge at Chapple Vale, south of Simpson, for more than a month.

Emergency works will be done to replace the bridge, estimated to cost Corangamite Shire Council between $350,000 to $600,000.

Typically, any contract above $200,000 requires a public tender but the process will be fast-tracked.

Cr Jamie Vogels, also a dairy farmer, said it was important to speed up the replacement as the bridge provided access for Mr Ferrari, whose farm and dairy was intersected by the Gellibrand River and bridge.

"We need to get this bridge built as quickly as possible," he said.

"The truck that was on it was extremely lucky.

"We need to get this built so if we bypass the usual system while taking every precaution to get value for money then I'm happy for this to go through."

It will be funded from the council's accumulated surplus from the end of 2020-2021. Burrupa Road connects the Great Ocean Road in the south and Lavers Hill Cobden Road in the north.

The Burrupa Road bridge traverses the Gellibrand River which forms the municipal boundary between Corangamite Shire and Colac-Otway Shire.

Heavy equipment was used to get the truck off the bridge last month, which had no load limit, and while at first it was throught the collapse had only caused minor damage to the truck, it ended up warping the tipping body and bent all the axles.

"It must have been a fair thud," Mr Ferrari said.

It was lucky the recent floodwaters in the river had receded.

"Once in every 10 or 15 years it virtually goes over the bridge," he said.