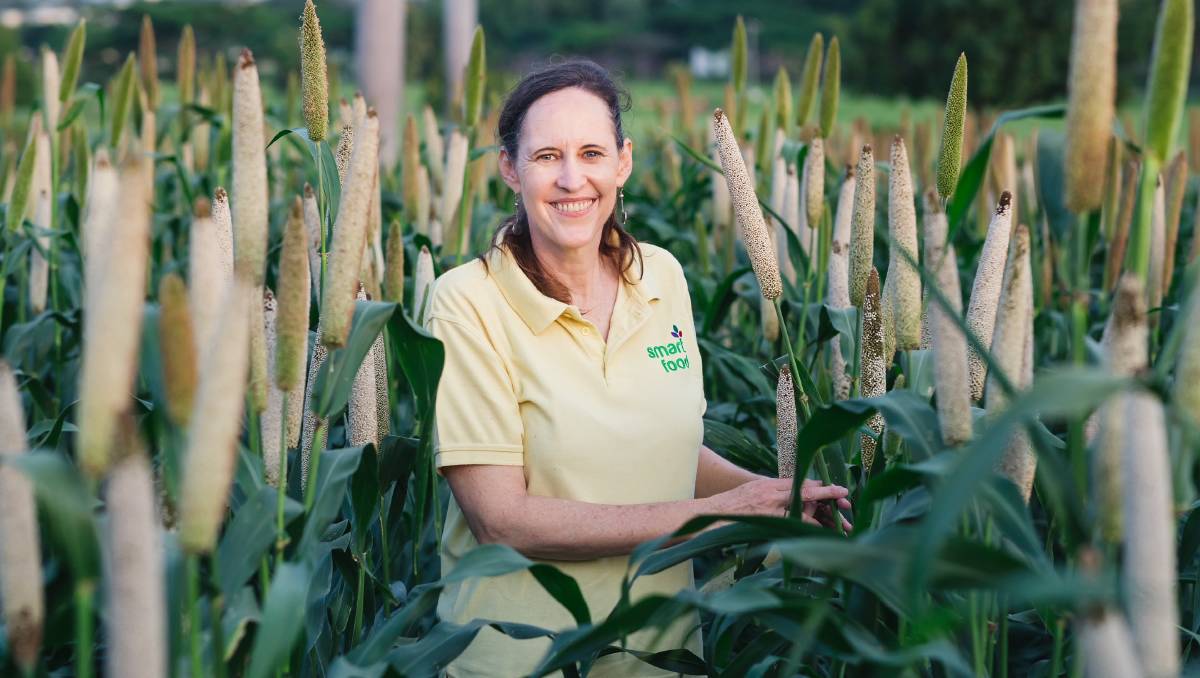 Joanna Kane-Potaka is a big believer in the potential for wider adaptation of millet and sorghum in diets across the world.

Researchers have said eating more millet and sorghum makes a lot of sense in terms of both minimising climate risk and dietary health.

MILLET and sorghum are well known within Australian cropping circles, but primarily for their use as livestock feed.

However, the millet and sorghum family have been used as staple crops for humans for millennia and now researchers are investigating the many health benefits of the grain.

When combined with the hardiness of the millet family and its ability to tolerate both extreme hot and dry conditions it is no wonder researchers are recommending millet and sorghum to Australian farmers.

Australian millet specialist Joanna Kane-Potaka, who has worked at the International Crops Research Institute for the Semi- Arid Tropics (ICRISAT) in Hyderabad, India, for the past nine years, has co-authored a report, published in Frontiers in Nutrition journal, about links between millet consumption and reduced risk of diabetes.

"There are some promising findings regarding eating millet, defined broadly in the study to also include sorghum, and reducing type 2 diabetes risk, while the millet has also been showing to manage blood glucose in people with diabetes," Ms Kane-Potaka said.

RELATED: Contamination in sorghum an issue

This study is the first in a series of studies that has been worked on for the last four years as a part of the Smart Food initiative led by ICRISAT that will be progressively released in 2021.

Australia's DFAT selected Smart Food in the top ten global food innovations and funded the Smart Food initiative at ICRISAT, to test the markets for acceptance and nutritional benefits of millets and sorghum.

Ms Kane-Potaka said millet and sorghum both ticked the boxes as 'smart foods', which are good for people, the environment and farmers, and said she would like to see more people adopt millet as a staple in their diet.

She said people in sub-Saharan Africa and the subcontinent had long appreciated both the nutritional value and the agronomic reliability of the crops.

"They were the major source of calories for millions of people but in recent years there has been more focus on the big three of maize, rice and wheat," she said.

"There has been a lot more investment in breeding of these big three crops, but in semi-arid regions they just might not be suitable."

She said with concerns about climate variability, millet and sorghum could help provide growers with reliable options.

"Millets, including sorghum, have many advantages for Australia, being an option for farmers during a climate crisis as they are very hardy and able to grow in high temperatures with minimal water," she said.

And she said the opportunities for food products were limited only by the imagination.

"There are many opportunities to develop a wide range of consumer products with millets, ranging from pancake mix to soups, energy bars, breakfast cereals, health shakes and more.

"This could be a triple win for the farmers, industry and consumers if promoted."

Fellow co-author Ian Givens, director at the University of Reading Institute of Food, Nutrition and Health in the UK, said millets shone in dietary trials.

"In the largest review and analysis of research into different types of millet compared to other grains such as refined rice, maize and wheat we found that millets outperform their comparison crops with lower GI and lower blood glucose levels in participants," he said.

The report found that millets have a low average glycemic index (GI) of 52.7, about 36 per cent lower GI than milled rice and refined wheat, and about 14-37 GI points lower compared to maize.

All 11 types of millets studied in the report could be defined as either low ( 55) or medium (55-69) GI, with the GI as an indicator of how much and how soon a food increases blood sugar level.

Ms Kane-Potaka said there was an interesting dynamic with market acceptance.

While in the west, sorghum and millet are being hailed as the next super foods, in the areas it was traditionally a staple crop she said there were some PR obstacles to overcome.

"Millet and sorghum are very nutritious and readily available still, yet they are regarded as the food of the poor.

"White rice, in particular, in West Africa, is regarded as the aspirational food and even the colour of millet and sorghum-based foods are a negative compared to the bright white of refined rice."

"However, rice, wheat and maize are often not suited to the drier areas where people are trying to grow it and instead they are importing rice and wheat rather than using something that can be produced locally."

The obstacles faced in improving consumption rates in Africa and Asia are not an issue with western consumers.

In the west the challenge is the low level of consumer awareness and products with millets and sorghum.

"The millets fit the bill with virtually every health food trend, they are gluten free, they are an ancient grain and they're great for weight loss," she said.

"The products are low GI and high in fibre so they will be a food of choice for health-conscious consumers, it could easily be like the rise of quinoa over the past five or ten years as well as reaching the more general consumer given the wider applications for food."

In terms of preparation she said it was not especially difficult to cook millet.

"In the smaller seeded lines it is much like you would cook rice and it can be served in the same way, there is no extra step required in cooking."

She said she hoped the confirmation that the United Nations had declared 2023 the International Year of Millet would help raise the profile of the little-known family of grain crops.

"With quinoa, the International Year of quinoa really helped raise the profile of the crop with western consumers," she said,

"Now we want to do the same but take it further and bring millets and sorghum into mainstream food in the west and back as a staple across Asia and Africa."