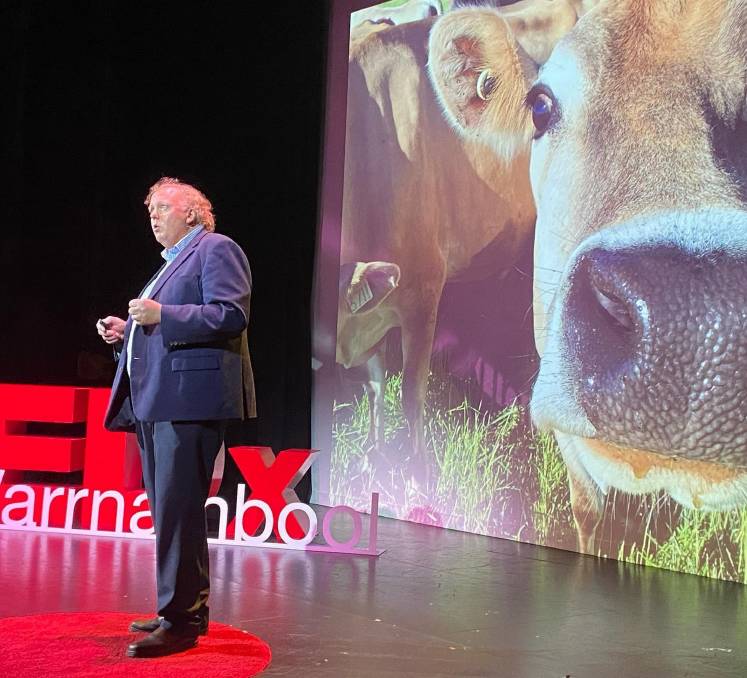 HAPPY: Associate professor in cattle medicine David Beggs talking about the animal welfare implications of the way cattle are raised at a Tedx Talk.

Since biblical times, societies have wrestled with the apparent juxtaposition of treating animals well and ensuring they have a good life at the same time as raising them for food.

Today, that quandary is at the crux of some of the most pertinent issues in the livestock production space, from efforts to garner government support for banning certain sectors to attempts to market animal protein alternatives.

Little wonder then that an Australian Tedx Talk featuring a former country veterinarian turned academic with a PhD in animal welfare on the topic of what makes cows happy has garnered plenty of interest.

"At first glance, that seems like a question with a straightforward answer but it belies the greater question of what do cows want in life," Dr Beggs said.

"We know animal welfare is important to most people - but what is it and how do we measure it?"

Animal welfare scientists, he explained, add up the sum of life experiences to determine whether an animal had a life worth living. It's all about understanding how the animal perceives its own conditions.

And when it comes to bovines, the science points to three entrenched instincts that require an opportunity to be expressed.

The first is herd behaviour. There is great mental anguish when a cow is separated from a herd.

The second is agency - the ability to make choices about how the day is spent and the third is a desire for routine.

Grazing cattle ticks the above boxes and should be celebrated for its good animal welfare outcomes, according to Dr Beggs.

Where the lines with animal ethics become blurred is in the timing of the death, and the fact that afterwards cattle are eaten.

"We don't believe cows have an expectation of a future, that they spend time looking forward to the day their granddaughter joins the herd or what the future holds for her.

"They remember the past but they live in the present.

"So timing of death is not an animal welfare issue, only the nature of the death."

Judging by Dr Begg's evidence, the concept of producing food ethically has become distorted, particularly in the space of plant-based and alternative protein products.

"If you grow a canola crop and use insecticide to kill insects are you morally responsible for the birds and animals that starve as a result of that," he said.

"The beautiful yellow flowers that give us good feelings about a canola crop are present for one month of the year. For 11 months, there are huge tracts of land without a single flower, so bees die.Then stubble is burnt and everything that could live there is killed.

"Or take almond trees - if you grow trees in which birds can not nest and use water in such a way that wildlife can not share in it, have you been good for the world?"

Yet products produced in these ways are often held up as ethically superior to animal protein - something that does not hold water from an animal welfare science perspective.

"I'm content with the ethics of farming, where cows can choose to walk or sit for most of their day, where they be part of a herd, where they can experience contentment and moments of pleasure and where they have a life worth living and a good death," he said.

"I disagree with those who hold the view that because we have to kill animals, we should not have had them in the first place.

"I worry this philosophy is misguided because death and suffering of animals still happen with plant based foods - there it is just one step further out of sight."

The answer, he believes, is in trying to maximise animal happiness and minimise suffering rather than trying simply to avoid death.

"Let cows enjoy the taste of grass," he said.