Farmer Alan Pitcher tells what it's like to be the landholder who welcomes wind turbines. 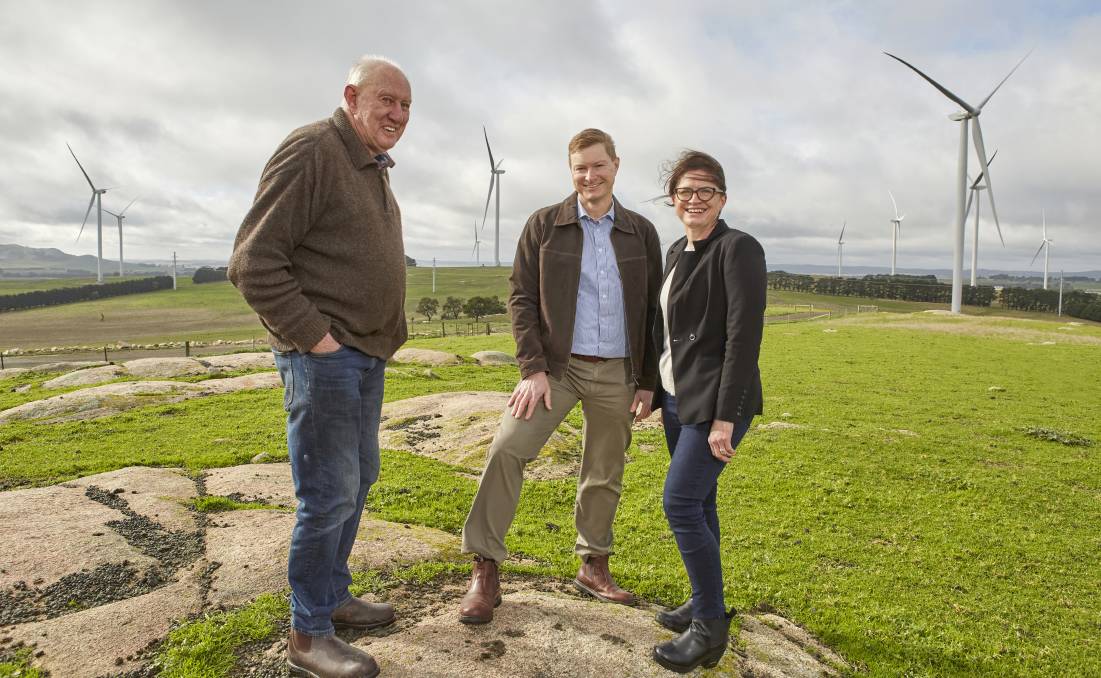 NO REGRETS: Host farmer Alan Pitcher with Nevetts Lawyers' Kent Mallinson and Cathy Drake at his Skipton property, which hosts turbines as close as 500 metres to his home.

The closest wind turbine is just 500 metres from his home but he said he was neither bothered by the sound, which reminded him of a jet plane, or the sight of them.

"I like them as an architectural thing. I think they're quite elegant," Mr Pitcher said.

But that wasn't really the point, he said. Aside from going into the grid, he was excited to learn that the excess power generated on his property would be used to pump water for the Snowy Hydro 2.0 scheme.

"What's going to replace old infrastructure like Hazelwood? Look, we've got to have electricity and some of these projects are very, very good."

But it hasn't always been such a rosy experience for the Pitcher family. The vocal and, sometimes, threatening opposition to the wind farm took a toll.

"I sort of had a lot of depression over that period and I suppose anybody going through it would have," Mr Pitcher said.

Some of the hostility might have been avoided, Mr Pitcher said, if the benefits of the wind farm were shared more widely.

"A downside was an uneven distribution of the funds that come from the turbines," he said.

"The ones that get the towers get lease money and the neighbour next door doesn't get anything.

"It'd be a better situation if some money could go to those people or remuneration like free power."

Each of the 11 turbines the family hosts will return lease payments of $20,000 a year, bolstering resilience with little impact on the running of the farm.

The Pitcher family owns and manages a total of about 2000 hectares, running 5000 Merinos and a cropping operation.

There have already been some handy farm management benefits.

The sheep liked to rest in the shade of the towers during summer and Mr Pitcher said the well-formed tracks servicing the turbines and their large, concreted bases had been a blessing in this season's extraordinarily wet winter.

The Pitchers had worked closely with the wind farm company to ensure the layout worked for practical farm management and they had also implemented some simple protocols for everyday activities like gateway access.

Key to achieving a good result, Mr Pitcher said, was early consultation with the facility designers and expert legal advice.

"My solicitor had been astute enough to say we needed a sunset clause," he said.

"We gave them so many years to have the thing in place, and then after that, the lease dropped away.

"Just before we got to the end of the term, the company started to panic, so then they offered half the lease money for towers that weren't even on the properties."

Acting for Mr Pitcher was Nevetts Lawyers special counsel Kent Mallinson, who said it was important to consider every stage of a wind farm development carefully.

"These documents tend to ratchet upwards gradually, so often a landowner will be approached with quite a short document and that can look fairly innocuous but it will lock them in," he said.

It meant farmers could find themselves unable to negotiate with other companies or achieve market rates.

Once the project was deemed viable, farmers would then likely be asked to sign a much more complex agreement called an option to lease, Mr Mallinson said.

"An option to lease does very much lock in the farmer at that stage but it doesn't commit the wind farm company," he said.

The wind farm company might choose not to exercise that option if it failed to garner finance, planning permission or even access to the power grid.

"There could be anywhere from three years to 10 years where the farmer is committed and not necessarily getting huge remuneration for that, but has uncertainty about whether the project is going ahead or not," Mr Mallinson said.

When projects did go ahead, the lawyer said, farmers often assumed they would have more control over the positioning of wind towers, access tracks and cables.

"It might be the turbines are closer to their residence than they're expecting or in their line of view but also find access tracks in a awkward location," Mr Mallinson said.

"It might isolate a small triangle of land, for example, in the corner of the paddock so that not only have they lost the productive land that the access track itself is taking out, but they're also losing that triangle as well because it's impractical to get over there and crop it."

Mr Mallinson often recommended farmers spend time early considering where turbines or tracks could be disruptive and market those as exclusion zones.

Not over until it's over

The end of a wind farm project could be just as important as its beginning, Mr Mallinson said.

Wind farms typically have a life of 30 years and, often, a right to extend them for another 30, with a requirement that the turbines are then removed and the land restored.

"That is a very expensive process, in fact I've heard it said that it's several hundred thousand dollars in today's dollars," Mr Mallinson said.

To mitigate the risk that farmers could be left with abandoned turbines if the company becomes insolvent, Mr Mallinson has tried to negotiate security in the form of a bank guarantee or fund.

"I've found very few companies are prepared to agree to that," he said.