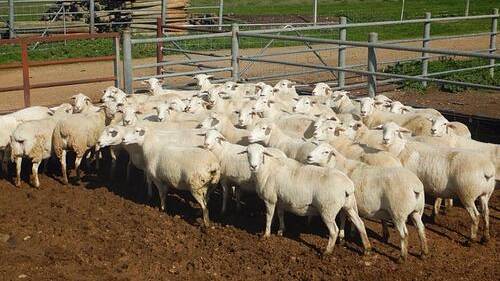 The pen of forty Australian White ewes sold for $1015 on AuctionsPlus. Photo: AuctionsPlus

In what is thought an Australian record for ewes, forty Australian White ewes were sold on AuctionsPlus on Tuesday for $1015.

In what is thought an Australian record for ewes, forty Australian White ewes were sold on AuctionsPlus on Tuesday for $1015.

The April/May 2020 drop ewes, were carrying the Tattykeel Certified Red Tag and were listed on AuctionsPlus by Elders, Yarrawonga.

The vendor R and K Greenfields Pty Ltd, Bundalong, Victoria, has developed an Australian White flock based upon ewes of Tattykeel-bloodlines and the sale ewes were sired by Tattykeel-bred rams.

Rodney and Karen Vodusek, trading as R & K Greenfields Pty Ltd, Bungalong, said when the ewes finally sold, it made them feel "almost sick in the stomach ... because we couldn't believe it".

"My phone was running hot during the sale and it didn't stop until about an hour after the auction had stopped," Mr Vodusek.

"I didn't need to look at the action because I was busy doing some fencing and receiving text messages from all my friends and my agent telling me about the price at the same time".

Mr Vodusek said the pen of ewes attracted 65 bids from six buyers over a 90-minute period.

The lambs had a reserve of $750 and were the first ewes sold off the property, Hareeba Park, since the couple purchased it in 2018.

They were bought by Craig Pellow, QPL, Temora, for a client at Carinda in northern NSW who is starting an Australian White flock.

"They are excellent shedders and weighed 72kg."

Mr Pellow also confirmed the ewes had been scanned-in-lamb to Tattykeel-bred rams and the results showed 60 percent for multiples and 40pc were carrying single lambs.

"The Red Tag guarantees the provenance of the breeding of the ewes and we are seeing a premium being paid for those ewes," he said. "Breeders of Tattykeel-blood Australian Whites are being rewarded for their commitment."

AuctionsPlus spokesperson confirmed the Australian White lines offered with Tattykeel certified red tags continue to dominate the market, attracting a remarkable amount of demand and breaking records. Buyers are willing to pay top dollar to secure these Tattykeel lines, and in the current market, sellers are certainly being rewarded through AuctionsPlus.

The story Is $1015 an Australian record for ewes? first appeared on The Land.