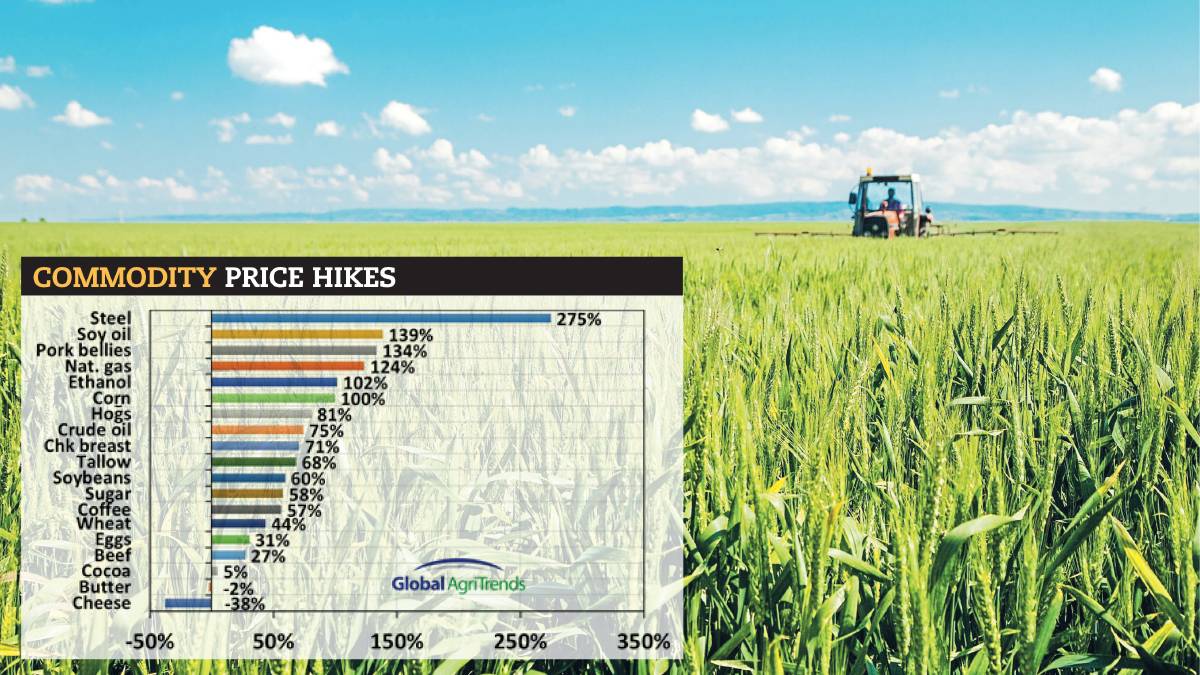 What is a commodity supercycle and is Australian ag in one?

MANY of the prices of commodities across agriculture, metals and energy are rising to multi-year highs on the back of supercharged pandemic-driven demand and reduced production.

Talk of COVID kick starting a commodities supercycle is hot and heavy, particularly in categories where the chase for food security has facilitated genuine structural demand shift.

A supercycle, where commodities trade above their long-term price trend for a decade or more, has big implications for the business of farming.

Experienced agricultural consultant Robert Herrmann, Mecardo, says concepts like supercycles are big ticket items producers need to understand in order to best position their own operations, and agriculture industries as a whole, for future prosperity.

The decisions being made on-farm right now will be critical to the ability to fully capitalise on emerging potential presented by longer-term bullish commodities markets, he says.

Prices in some categories, across all commodities, have shot to stratospheric levels this year as demand has grossly outstripped supply.

On the world stage, steel is trading at a level 275 per cent above what it was a year ago, data collated by Global Agritrends shows.

According to the World Bank, nearly all commodity prices are now above pre-pandemic levels.

Global agriculture prices are travelling 20pc higher than a year ago and have typically reached levels not seen since the start of last decade, international economists are reporting.

In agriculture, corn, soy, pigs and chicken have led the global price charge.

In Australia, it has been cattle. The Eastern Young Cattle Indicator has continually broken new records over the past year.

To put it in perspective, in 2002 it was 242 cents a kilogram carcase weight and in the past year it has lifted by that entire amount to crash over the 1000c mark. It set a new inflation-adjusted record, which means it's the highest it has been in real terms since the late 1960s.

Other Australian livestock indicators - for all categories of cattle, for lambs, goats and wool - have also lifted significantly, and forecasts are for all to continue on that rising plane.

In some cases, predominantly in grains, production will catch up quickly and it will be but a short-lived bullish market, analysts say.

But for many, a 'new normal' is being touted and in true commodity supercycle fashion, the rising tide is lifting all boats. Booming prices in one commodity are feeding the ability for players to fork out big money for others.

Some foreign exchange experts believe the word supercycle is too far a stretch for what will be a one to three year trend but others make a strong case for a much longer structural bull market for most commodities, particularly those in agriculture.

Under-investment due to a decade of poor returns has left inadequate production capacity to meet a V-shaped vaccine-driven demand recovery.

Secondly, COVID is ushering in a new era of policies aimed at social need instead of financial stability. This will create commodity-intensive economic growth.

Thirdly, inflation risks are greater than at any time since the 1970s due to these policies. Commodities are the best inflation hedge.

Base metals and agriculture have more near-term upside than the likes of oil, according to Goldman Sachs.

China is a key character in this story.

"In agriculture, 2020-21 was a record-breaking year of US corn, soy and pork exports, largely driven by increased Chinese buying to combat rising domestic food prices and low state reserves of all three commodities," the firm's 2021 Commodities Outlook read.

Brett Stuart, chief executive officer of Global AgriTrends, told US media the world was in the beginnings of an agricultural commodity super cycle.

"Corn and soybean prices are going through the roof. We have incredible Chinese demand for corn right now. China is driving global markets for beef, pork, poultry, corn, and soybeans," he said.

In India, commodity market analyst Abhijeet Banerjee, in the agricultural publication Krishi Jargram, wrote demand for the likes of soybeans, corn and animal products was only expected to grow.

"China's consumption is set to improve further. Also, various countries have rolled out long-term plans to create strong food reserves amid the supply chain disruptions due to the COVID crisis," he said.

"Concerns over rising US debt levels and current account deficit have pressured the US dollar. Most of the agricultural commodities are produced in emerging markets and usually priced in dollar terms.

"Therefore, a weaker dollar will be positive for the commodities.

"All these factors do indicate that the agricultural commodities are preparing for a super cycle."

Australian-based Global Agritrends analyst Simon Quilty said the normal pattern was for agricultural markets to develop and improve at varying points in time.

"What we are seeing now is a simultaneous improvement, due in a large part to vaccines coming online around the world at the same time," he said.

"That is highly unusual.

"Production retracted across the board last year when the virus hit. The rebound year will always have demand exceeding supply, pushing prices up. This time, however, demand is exacerbated by the pandemic."

Petrol on a fire

For some commodities, such as red meat, the fire was already lit and COVID has been the petrol thrown on, Mr Herrmann said.

"Even when the COVID influence fades, the underlying growth in demand relating to population and spending ability will still be there," he said.

The rationale behind the idea of the mining boom leading to a dining boom was that as countries like China built their gross domestic product and household wealth by moving people from subsistence living into industrialisation and manufacturing, more money is spent on high-quality food.

Indeed, that trend had driven demand for Australian red meat and dairy in China for years leading up to the outbreak of COVID.

At the same time, Mr Herrmann points out, cattle herds around the world weren't growing in response to increasing demand.

"It's not unreasonable to say the bottom ranges for the likes of the EYCI and ESTLI (Eastern States Trade Lamb Indicator) won't ever be seen again," he said.

Sponsored by
An Elmo red Brahman bull has sold in the paddock for $80,000 to an equal partnership.
Test
It's believed containerised trade to Bangladesh, one of Australia's major markets for Desi chickpeas, is under pressure.
Test
Weighing 935kg, Claire Murphy's scrap metal sculpture is taking Queensland's campdraft community by storm.
Test
Each section on each side can be folded independently, allowing obstacles to be negotiated with ease and the boom to be compactly folded for transport.
Test
Farm owner urges people to check in on neighbours if infected or isolating due to COVID-19.
Test
USDA data shows that global wheat supply issues are continuing to ease.
Test
Cannon Hill-based meatworks Australian Country Choice is the latest inductee into the illustrious Queensland Business Leaders Hall of Fame.
Test
The 70,000 square metre development is set to include the construction of about 55,000 tonnes of granular fertiliser storage in a new warehouse and 32,000t of liquid fertiliser storage in two 16,000t tanks.
Test