FEELING THE PINCH: Gippsland shearing contractor Jason Kretschmer, Ewe & I Shearing, says he has struggled to field a full shearing team due to a lack of shearers for a number of reasons, including border restrictions.

Australian woolgrowers are starting to consider their options again with another shearer shortage looming.

But many hope the problems of last year will be overcome with an easing of pandemic restrictions, should that happen.

Victorian woolgrowers don't think they will struggle to find labour to shear their sheep this year, despite some contractors saying they are having problems putting together a full shearing team.

The industry is hedging its bets on more lenient interstate border restrictions this spring, and the ongoing trans-Tasman border bubble, which could allow more Kiwis to enter the country as shearing ramps up.

Producers don't want to draw attention to the issue, but industry insiders believe reputable shearers will have an opportunity to pick and select their jobs due to the steady demand for reliable labour.

Working conditions are also set to be put under the spotlight with one contractor indicating sheds without the essentials such as running water and decent amenity facilities could fall victim to a labour shortage.

Gippsland shearing contractor Jason Kretschmer, a shearer of 20 years, said he was noticing a big shortage of shearers and shed hands as he planned to gear up for the spring rush.

Mr Kretschmer bought an established contracting business, Ewe & I Shearing, last financial year and said shearers would not struggle to find work this year, but contractors like him were finding it hard to attract staff.

"Last year when we got the business, we were lucky because we managed to get a really good crew of people but we've lost some of them," he said.

"One shearer went on to manage a cattle station north of Alice Springs and a couple of shed hands have gone on different journeys as well."

He knows good working conditions are the most important aspect of retaining a reliable and diligent workforce.

But he said conditions of some shearing sheds were lacking the very basics of a good workplace.

"Some of the sheds we work in still don't have water and in some cases we need to cart around a Portaloo," he said. 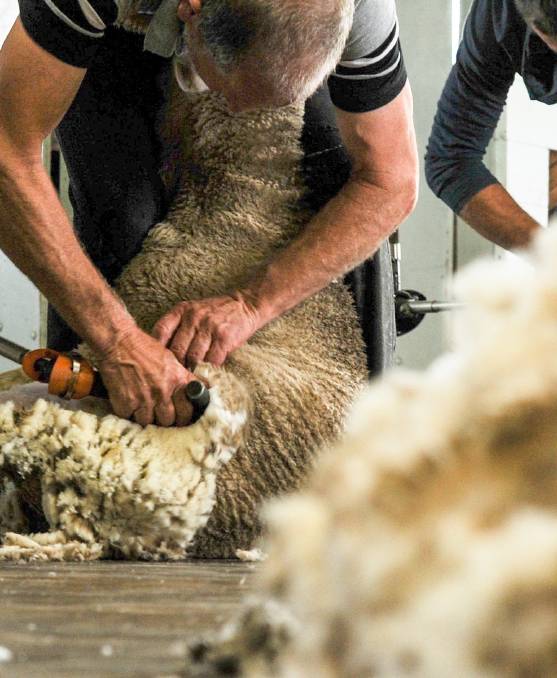 The industry fears the loss of Kiwi shearers will hit hard again.

"So farmers really need to look at their sheds to assess how good the conditions are.

"Regular maintenance is also a big factor; you should be able to get to a shed and not have to worry about hazardous conditions such as unmaintained equipment and broken floorboards."

Mr Kretschmer covers eastern Victoria from West Gippsland to the NSW border and runs a team of eight shearers.

He said weight increases in sheep had also added to the challenging conditions shearers faced.

"In the last decade, sheep have grown to ridiculous sizes to manhandle," he said.

"It puts a lot of pressure on the knees and elbows and the body in general.

"We pay well and truly over the award rate because we need extra shearers but I think it's going to be even worse than last season trying to find the right labour."

In the western district, Elders Hamilton district wool manager Andrew Howells said the industry would depend on relaxed interstate border restrictions to ensure the shearing fraternity was plentiful when shearing ramped up.

"All the Kiwi shearers seem to be back but it may present an issue as we move into spring," Mr Howells said.

"We've got so much wet weather at present and not a lot of shearing going on so people are certainly wary and nervous about it but it doesn't seem to be as worrying as September and October last year.

"That's not to say it won't change though."

"We won't be able to rely on New Zealanders coming across to help us and while it's not a position any of us want to be in, it is reality," Ms Hall said.

She said a big problem the wool industry would have to face was the suspension of quarantine-free travel from Australia, meaning returning NZ shearers under the existing rules were required to undertake 14 days in isolation on return to their country. The shearer shortage might be worse in some states than others.

"A limited number of shearers came over from NZ when their season finished in May and June, but now that border restrictions have changed again, New Zealanders are not keen to come over," she said.

"We're also facing a very wet season in the western part of the country so that is concerning farmers who have delayed shearing already and ultimately that will place pressure on the available labour."

In past years, Mr Pascoe has shorn every six months but said a shearer shortage in February of this year meant he had to cancel plans to shear.

"We ended up crutching rather than shearing because the ewes were heavily pregnant," Mr Pascoe said.

"We had a local contractor who pulled the pin and that compounded the situation but our contractor is now back on track so we don't expect a shortage again like we had earlier this year."

He said his mob was shorn last month to compensate for the delayed summer event, meaning the ewes were shorn post lambing instead of before giving birth.

"It was very wet and boggy and hard to keep the sheep dry but that will help get us back on track with our September and February shearing," he said.

In somewhat of a silver lining for Victorian woolgrowers, Australian Wool Innovation says a potential shortfall of shearers will be felt far greater across the Murray in NSW.

AWI wool harvesting training and development manager Craig French said the organisation had increased its funding for shearer training to compensate for a drop in numbers for a second consecutive year.

"AWI has increased the number of novice training schools for new entrants... [and] has increased funding for shearing and wool handling training therefore more availability of trainers available for Industry," Mr French said.

He said the organisation was also introducing new incentives for learner shearers to go into sheds and be equipped with new and effective tools for the trade through the Breaking Down the Barriers project.

He said AWI was also working with high schools to run two and three-day workshops to provide a potential pathway to shearing for those thinking about their future careers.