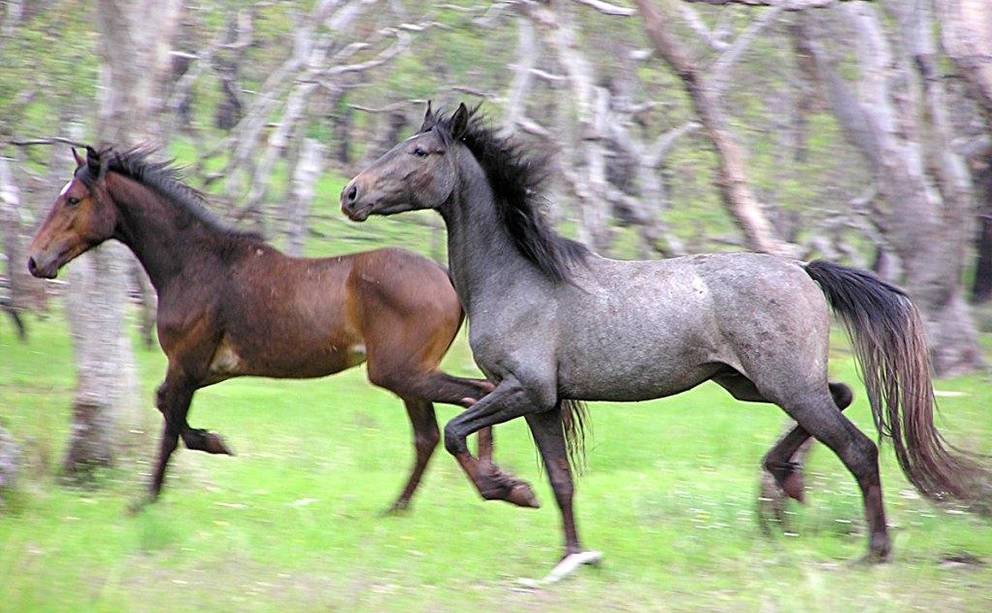 The station owner believed the consignment of feral horses was heading to a Queensland abattoir for eventual human consumption but instead went to Victoria for use in pet meat. Picture: Australian government.

It is believed horse meat from the 1000 square kilometre station found its way into pet meat which have killed more than 20 dogs in Victoria.

Scientists have already zeroed in on the toxin Indospicine as the cause of the deaths.

Indospicine comes from the hardy Indigofera (Indigo) plant which grows in outback areas.

Feral horses and camels from the NT outback graze on the plant and have caused toxicity problems in pet meat before.

Australia is estimated to have about half a million feral horses mainly in the NT, Queensland and Western Australia.

Smaller populations are located in eastern Australia, mainly in the alpine and sub-alpine areas

Dogs are especially sensitive to Indospicine but it's the first time illness or death from the toxin has been reported in Victoria.

More than 20 dogs have died from liver poisoning and about 60 others have fallen ill after eating pet food contaminated with Indospicine.

Government authorities said the meat came from Maffra District Knackery, east of Melbourne, which slaughtered a truckload of horses in May.

"The property owner advised he was unaware the horses would be used to manufacture pet food," he said.

The property manager was told the horses would be trucked to Queensland abattoir and be used for human consumption believed for export.

It is believed the horses were re-directed south due to COVID lockdowns.

NT investigators said they did not locate Indigofera at the unnamed station and the owner said none of the horses were suffering from Birdsville (or Indospicine) disease.

The Territory's Dr Saville said Indigo could have been growing in patches across the property and been missed.

Samples from about 80 other horses on the property were taken.

The results will be provided to the Victorian authorities.

Victoria's meat safety watchdog, PrimeSafe, continues to urge dog owners to check the source of their pet meat amid concerns some of the toxic meat could still be on sale.

It's illegal in the NT to slaughter a horse for pet food if it's suspected the animal has been in an area where Birdsville disease occurs.

Agriculture Victoria says test results have confirmed pet meat processed in Gippsland as the likely source of the toxin.

"Horse meat is emerging as the focus of the investigation into the indospicine toxin found in pet meat products," government authorities said.

It is believed there are more than half a million feral horses roaming free across the outback.

In Victoria, horses can be legally used in a knackery for use as pet food in accordance with the Australian Standard for the Hygienic Production of Pet Meat.

There are no indications of any risk to human health nor of human food safety issues associated with these cases to date.