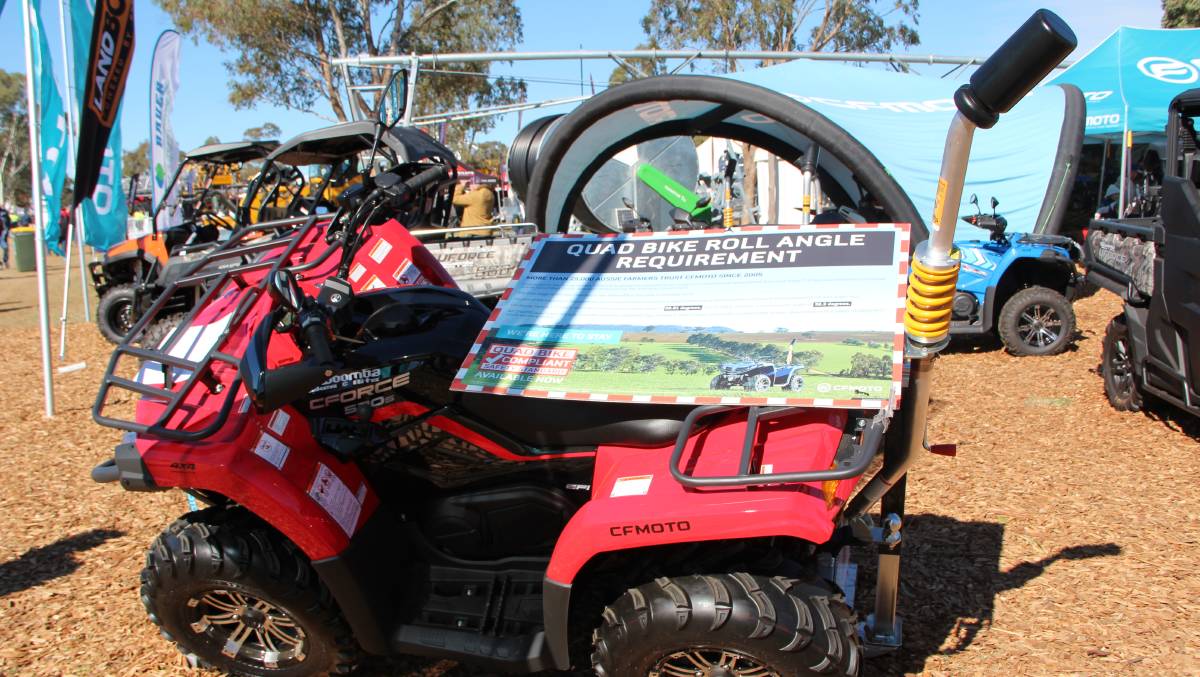 All new and second-hand imported quad bikes sold in Australia from October 11 must be fitted with operator protection devices and meet minimum stability requirements.

The ACCC coordinated with state and territory consumer protection agencies to examine whether suppliers were complying with stage one requirements of the Quad Bike Safety Standard.

One in six quad bikes for sale through dealerships do not meet national safety standards, surveillance from the Australian Competition and Consumer Commission has revealed.

The ACCC coordinated with state and territory consumer protection agencies to examine whether suppliers were complying with stage one requirements of the Quad Bike Safety Standard, which has been in place since October 2020.

Eighty-four per cent of quad bikes assessed were found to be compliant.

The vehicles were not fitted with the required reflectors, compliance certificate labels, hang tags, and had information missing from the owner's manuals.

Under stage one of the Quad Bike Safety Standard, all new and imported second hand quad bikes sold in Australia must be tested for lateral static stability and have a hang tag attached to them showing the angle at which the quad bike tips onto two wheels.

They are required to carry a roll over warning label on the bike and the owner's manual must also include roll over safety information.

ACCC deputy chairman Mick Keogh said enforcing the quad bike safety standard is an ACCC priority this year and all quad bike suppliers should be aware the ACCC will be keeping a close eye on compliance.

"Although 16 per cent of quad bikes inspected, or roughly one in six, were not compliant with the safety standard, suppliers have so far co-operated with our investigations and taken steps to fix problems, including recalling non-compliant bikes where necessary," Mr Keogh said.

Suppliers who fail to comply with a mandatory safety or information standard can be found guilty of a criminal offence.

The maximum fine is $500,000 for individuals and for a body corporate, the greater of:

An ACCC spokesman said at this stage, no criminal fines or civil penalties have been imposed.

"The ACCC and state consumer law regulators will ramp up compliance and enforcement efforts as we approach the introduction of stage two of the safety standard," the spokesman said.

When stage two comes into effect from October 11, all new and second-hand imported quad bikes sold in Australia must be fitted with operator protection devices and meet minimum stability requirements.

"The second stage requirements are absolutely critical for improving the safety of quad bikes and saving lives," Mr Keogh said.

"Suppliers have had plenty of time to make sure that all new quad bikes for sale meet all requirements of the safety standard.

"We will be conducting national surveillance again this year and cracking down on anyone supplying non-compliant quad bikes."

The requirements have been a contentious topic for a number of years and have lead to the withdrawal of several brands from the Australian market.

Honda, Yamaha and Suzuki will exit the Australian ATV market when stage two comes into effect, while Polaris has already left.

The Australian distributor of CFMoto, Mojo Motorcycles, are one of the companies that have opted to continue supplying quads that meet the safety standards.

The company has met the stage two requirements early and OPDs are now standard fitment across its entire model range.

"By introducing a new quad bike range that complies with stage two of the Consumer Goods Quad Bike Safety Standard requirements well ahead of the mandatory timeline shows our commitment to remain in the Australian market.

"And the response from customers has been phenomenal, with record sales for CFMoto over the last 12 months and not one reported incident since the OPDs have been fitted."