Nelani Roux says wrapping silage with 70 per cent stretch gears creates a tighter seal on the bale, which provides the perfect anaerobic conditions for ensiling.

Bunkers, pits, and bales: a guide to better quality silage.

What silage suits your farming system?

That's the first question farmers must answer before embarking on any fodder conservation, according to Agri Novatex silage expert and animal nutritionist Nelani Roux.

"If you are a grazing farmer and only feeding silage in dry months and only in the paddock, it is hard to do that out of a bunker," she said.

"Bales are much more practical if you are using it as a supplementary feed on a grazing farm."

The next step is to calculate the amount of silage you will use.

"If you are going to be feeding out a tonne a day, bunkers are probably not the best idea because you will have the face of the bunker exposed to oxygen each day to take only a small amount from the stack," she said.

"At a minimum, at least half a metre must be taken from the face each day to prevent oxygen penetration.

"If you are not able to do that, then bales are going to give you the capability to feed smaller amounts without affecting the quality of the rest of your feed."

Nelani has dedicated her career to helping farmers make the best decisions about their silage to maximise feed quality.

Before moving to Australia, she worked in the South African beef feedlot sector, focusing on silage production.

In that role, she spent a lot of time working with feedlots to set up their silage programs, working with everything from the infrastructure to advising on silage inoculants and crop packing to improve the quality of the stored feed.

Underpinning all quality silage, whether it's bales, pits or bunkers, is the timing of crop or pasture cutting.

Ensiling the best dry matter is how quality silage begins.

Making sure it retains its nutritional value comes back to some simple on-farm practices. 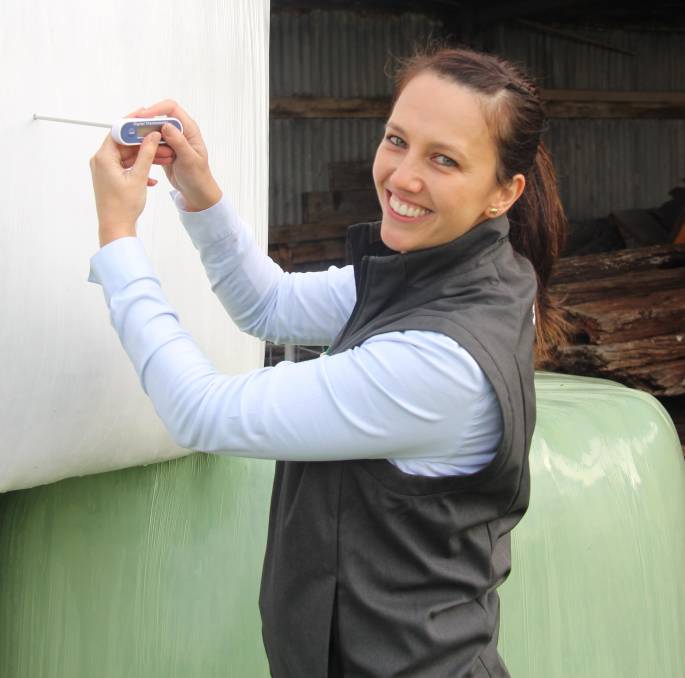 Make sure the size of your bunker is correct

"How much you need to feed out in a day equates to how big or wide your bunker needs to be," Nelani said.

"A lot of people make big, wide bunkers but the surface area to volume isn't ideal, and it also means you are taking away less of the face every day because the face of the stack is larger.

"Narrower is better for preserving quality."

Sealing the pit and finding the right cover

Throwing tyres onto a silage stack- is an unpleasant task, but crucial to keep air out and seal in the quality for a fast and efficient fermentation.

But tyres can't just go anywhere, and there's proof that placing them in certain configurations and focusing on the edges and overlaps improves the seal of the stack.

"And yes, you are putting a lot on, but you don't necessarily need to place tyres across the entire bunker.

"It's possible to place rows of tyres every metre or so along the top, making sure the tyres touch to create an airtight seal for that section."

Dirt or sandbags are ideal for sealing the edges of the pit as they create a better seal than tyres.

Like all silage production, the most important tip, is to seal the silage bunker or pit as soon as possible, according to Nelani.

"The quicker you cover it, the quicker the oxygen is excluded, preventing further losses and you will get better quality," she said.

For the cover, Nelani advised using a dual-layer cover system with a thin vacuum film and plastic over it.

She said thin vacuum film, as a pliable plastic, could mould to the silage stack, unlike thicker 200-micron film which is rigid and can have crevices and air pockets beneath the surface.

"If your bunker is sealed really well the microbes in the silage will utilise the oxygen that's left and it will cause a vacuum effect, sucking down the thin layer, into those bumps and crevices, eliminating all of the trapped oxygen on the top layer," Nelani said.

"It's giving you a much better-quality top layer, so the silage at the top of your bunker should be the exact same quality as at the bottom."

How silage is removed from the bunker or pit plays a huge role in maintaining its quality.

"You want to remove your silage in the most efficient manner, without pumping oxygen in there," she said.

"Using a defacer, it is possible to shave the face or the front of the stack.

"Block cutters work in a similar fashion, the implement makes a clean cut into the silage stack and the feed on the face left behind remains compacted and not unnecessarily exposed to oxygen."

Both a defacer and block cutter are implements that can be attached to a front-end loader.

For those who must use a tractor bucket, Nelani recommended using the bucket to scrape silage from the top of the face towards the ground, and then placing that silage into the feed wagon.

She said using the bucket to scoop upwards, opened the stack to oxygen penetration.

"You are effectively pumping oxygen into the next metre or more of your bunker and that's going to sit there for days before you get to it."

Using inoculant on a silage stack is like insurance, it's not something you can easily see with the naked eye, but it makes a difference.

"From the moment you have cut your crop you start losing quality," she said.

"You will never get better than what it was then.

"All we can try and do is limit the losses and inoculant does that."

The concept that 'you don't need inoculant if you make really good silage' isn't entirely true, according to Nelani.

"Even if you do everything right in your silage bunker, you can still benefit from using an inoculant," she said.

"What the inoculant does, it puts a big quantity of very efficient ensiling bacteria onto your silage, and this outperforms the wild bacteria that's already there."

"Every single time you deviate from the perfect scenario, inoculants play and bigger and bigger part in maintaining the quality of your silage," she said.

Lime, applied to the top of a silage stack, has been a practice used by some farmers to help eliminate the oxygen in the stored feed.

But lime, according to Nelani, is not the ideal practice.

"Yes, it reduces moisture levels, and less moisture helps prevent mould and yeast from growing, but it also affects the fermentation process and the nutritional value of the feed," she said.

"Using a quality inoculant and sealing the stack well will negate the need to use lime."

Different crops ensile at different rates due to variation in bacteria loads and available sugars.

Ideally, each crop or pasture would be ensiled in a different stack.

"When you are putting crops together you get to a situation where one might ferment really quickly, while another is slower," Nelani said.

"It's hard to manage them in the one stack to get the best quality silage."

Setting up a silage bunker can be expensive.

This cost decreases with every year and the annual plastic cost is generally less than the equivalent bale silage, according to Nelani.

Using a baler with knives helps to pack a denser bale.

"A denser bale means less air trapped in the bale and it means less spoilage," she said.

Silage bales should be transported to a storage location within 24 to 48 hours of wrapping.

Otherwise, they must be left where they are wrapped for four weeks.

This is crucial to ensure the best possible ensiling process.

"Every time you touch it, you disturb the fermentation process, and the gasses in the bale move around causing a vacuum and it sucks air back in," she said.

Nelani always recommends six layers at 70 per cent stretch as the "best-case scenario".

"If you are going to be putting it on a truck, or are selling it on, moving it around after, or wanting to save it for longer, use six," she said.

"Also, wrapping with 70pc stretch gears creates a tighter seal on the bale which provides the perfect anaerobic conditions for ensiling."

Again, this comes back to providing the ideal environment for ensiling.

If they must be stacked, they shouldn't be more than two bales high, and the weight of the bales should be spread.

Nelani said one bale could sit on top and in the middle of four bales on the ground.

Any hole in the plastic on a bale should be patched immediately and using silage tape which best matches the colour of the bale plastic.

"This means no black tape on green," Nelani said.

"That's because colours expand and contact at different rates.

"Black tape will get a lot hotter than a green wrap.

"If you have a black patch on green, your green will not be stretching and shrinking as much as the black due to the temperature differences which will mean it is not sealing and keeping the oxygen out."

Using a different colour tape will close the hole, but it won't seal it.

While it's difficult to get an exact match sometimes, get a tape that's as similar colour to the plastic as possible, Nelani said.