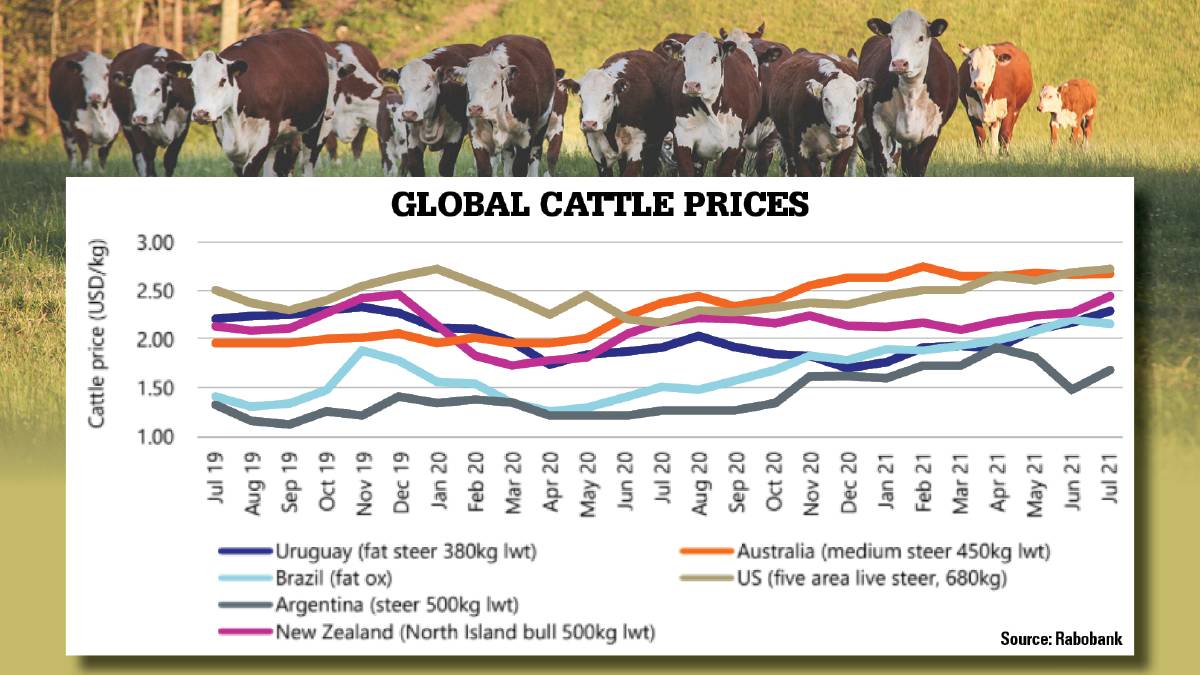 Why this cattle market peak will herald in a new era for producers.

FROM weaners and in-calf heifers to feeder steers and stud bulls, the dizzying heights that cattle prices have commanded could well be creating unease about a pending crash, especially among those who've lived through the many peaks and troughs of livestock markets.

Instead, there is confidence and a sense that Australia's beef industry has entered a new era of opportunity never before seen.

Indeed, it is that sentiment that continues to drive prices higher as much as it is rain, many long serving cattlemen and women believe.

It's a sentiment that has warrant.

For a plethora of well-documented reasons, ranging from a swine fever induced protein shortage to fast-rising middle class wealth throughout Asia, global demand for beef is growing.

At the same time, for reasons ranging from drought to politically-driven restricted exports from big producers like Argentina, supply is shrinking.

That demand/supply dynamic has triggered a rise in global beef prices.

Even before COVID threw petrol on the fire of demand for protein, industry leaders were talking a five year window of prosperity fuelled by demand growing to unparalleled levels and Australia's expertise as a global supplier.

We export beef to more than a hundred different international markets and the re-opening of food service as the world becomes vaccinated is only likely to exacerbate the demand, and thus prices paid, for the high quality product which Australian beef delights in.

But perhaps the strongest fundamental of all is the strength of the domestic market, which takes around 25 per cent of the country's total beef production.

Rabobank says domestic retail beef prices are nudging an all-time, inflation-adjusted price record. Beef has seen some of the largest price jumps of all the meats.

Yet, consumption is holding up. More than 80pc of Australian households purchased beef from retailers in Q2 this year, Nielsen Homescan data shows.

By comparison, at-home chicken consumption is declining, despite only tiny price lifts.

Australians have been willing to pay more for beef.

That is why so many are saying the cattle game is now in a 'new normal'; that the bottom ranges for the likes of the Eastern Young Cattle Indicator will never again be seen; that this price boom is, in fact, a supercycle.

The red hot demand for cattle right now is multi-tiered. There is simply so much strength underpinning the market.

"From restockers, to feedlots to supermarkets to exporters, everyone wants the limited amount of cattle on offer," he said.

"If you liken it to real estate, the owner-occupiers, renovators and investors are all fighting for the last unrenovated terrace in Paddington.

"We are in a herd rebuild, which traditionally puts upward pressure on the market, but this time it has aligned with a terrific season in most regions and interest rates lower than when man walked on the moon."

Mr Baldwin said times when new price benchmarks are set are not foreign to the cattle business but the 'length and breadth' of this peak was remarkable and the underlying demand fundamentals had set operators to innovation and investment like never before.

"There is now an insatiable appetite to improve genetics that is traversing all the bloodlines," he said.

"Everyone has a long-term view and they are no longer willing to just do what grandpa did, they want to investigate all opportunities.

"We are an industry that is responsive to trends in the markets, one that is willing to push the limits. There have been some big plays.

"Producers today also have quick data to rely on to make decisions, and science and agtech is opening doors.

"So it's an articulate confidence and that is going to change the landscape in cattle forever."

Experienced breed society boss Peter Parnell, who heads up Angus Australia, said the buoyant times for all of agriculture could not be denied but it would be overly optimistic to consider it everlasting.

"We need to remember the livestock sector is recovering from the most devastating drought in living memory, which led to the massive reduction in herd size that has driven the massive prices we are now seeing for cattle," he said.

"It was only back in 2018 that there were parts of NSW where you could hardly see any cattle. The downsizing of the herd was dramatic - extraordinarily so - and hence we've never seen such a dramatic rebuild period.

"A correction will come, but the hope is with the marketing diversity we have built in, we don't go back down to the bottom levels we've seen in past cycles."

South Australian prime lamb producer and Hereford breeder Graham Day, Allendale at Bordertown, says now is the most exciting time for those in livestock that he has seen.

Allendale cattle seedstock production goes back to 1949 and Mr Day has been at the helm for more than 60 years, so that is saying something.

"Indeed, prices might not stay at these levels but what it has done is given people the confidence to breed well, to invest and improve, and become the most important exporters of red meat in the world," he said.

"That will serve us well for years to come."

Mr Day said there were concerns emerging that new people trying to break into the business of breeding livestock would find it hard work, and that would have a negative effect on the industry.