PRICE IS RIGHT: Kelvin Price, Quantong, in a paddock of Trident TT Hybrid canola that has just burst into flower in the past week.

Farmers in dry regions through SA, Victoria and southern NSW are anxiously tracking the progress of a promising cold front due on Friday.

A SUBSTANTIAL rain event is forecast for late this week across south-eastern Australia.

With up to 25mm predicted over key cropping districts the rain will bolster already strong crop prospects in some areas or renew ailing crops suffering from moisture stress in others.

For farmers in parts of the Mallee in both Victoria and South Australia the situation is dire.

A late start to the season was followed by reasonable July rain but a dry end to August means the needle is on empty.

With unseasonably hot weather this week, with temperatures predicted to reach a scorching 33 in Mildura on Thursday crops will quickly rip through their remaining moisture reserves, meaning the rain forecast on Friday will be essential to maintain crop health.

Farmers in some areas of far north-western Victoria already believe it is too late to avoid significant yield loss from the dry.

Across the border The Break climate service said soil moisture probes at Pinnaroo and Lameroo were only 28 and 18 per cent full respectively.

"Crops look in pretty reasonable condition at present but we have had years where things have gone off from this stage so we are certainly not over the line yet," Mr Price said.

"There's still some moisture under the crops so we think they'll cope with the heat but we'll be glad to see some rain afterwards and we'd prefer to see milder weather afterwards for a bit yet." 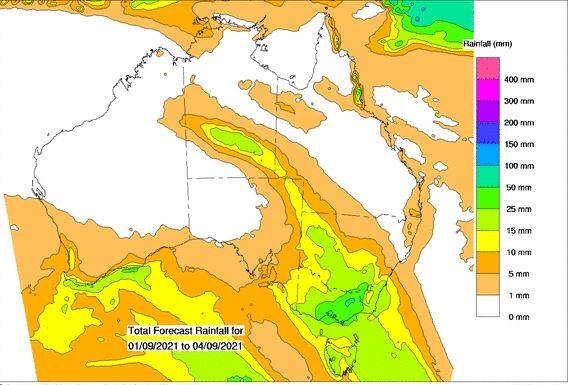 Farmers through dry areas in SA, Victoria and southern NSW hope a rain event due on Friday can deliver good falls to keep their crops going.

The Bureau of Meteorology is yet to fully commit to rainfall totals, but as of Wednesday morning was forecasting 10-15mm in Mildura and Renmark and 15-25mm in Horsham on Friday and between 12-30mm across Friday and Saturday at Hay.

Other weather modelling systems are at similar levels, however BOM forecasters said they could not yet pick the exact location of the low pressure system and pinpoint where the heaviest falls will occur, with predictions at this stage favouring eastern Victoria and lower totals to the west into South Australia.

Meanwhile, the BOM said the central Pacific Ocean continued to cool, which is consistent with the formation of a La Nina event, correlated with wetter than average conditions, but said it was unlikely to be strong or long enough to constitute a formal La Nina.

The Indian Ocean Dipole negative event, which is also a positive for above average rainfall, has weakened in the past two weeks, however the BOM believes it is to do with a strong period of easterly winds and that the IOD negative will continue throughout the spring.