The speciality canola Monola, which has a healthy oil profile, is closing the yield gap to other canola varieties. 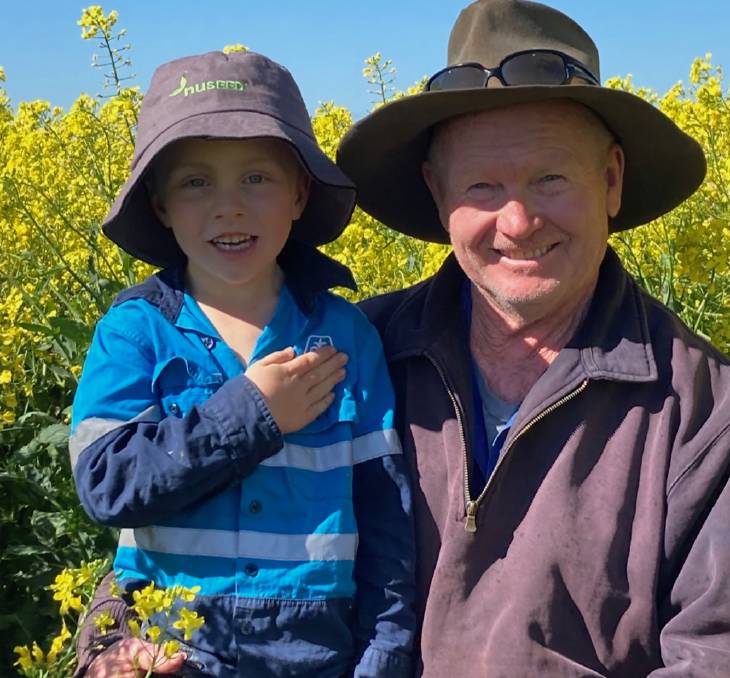 Ken Brain, Coleambally, pictured with grandson Jaxon, is a fan of the speciality canola Monola.

CANOLA values are at record highs, with offers of $900 a tonne delivered port as it is, so when you add a $100 a tonne premium on top you've got the potential for four figure returns and some huge gross margins given current crop prospects.

That is what is happening at present with Monola, a speciality oil canola bred by Nuseed for a low saturated fat cooking.

Even better for growers, new varieties mean the yield penalty to conventional canola is largely wiped out.

The premium is paid when the seed achieves suitable oil quality upon delivery at harvest, but growers find this generally is not a problem.

Monola is suitable to either irrigated or medium rainfall zones and wetter and can be a solid part of a cropping rotation, especially with the high oilseed prices on offer.

Riverina farmer Ken Brain, Coleambally, has grown Monola on irrigation for the past decade.

This year he has 220 hectares of the new Monola 420TT line, along with a trial 10ha plot of 422TT, which will be commercially available next year.

Mr Brain said the new variety looked outstanding, while Nuseed is confident new Monolas will have very little yield penalty to other lines.

Monola has thrived in Mr Brain's rotation, frequently yielding the same as mainstream canola varieties and performing well enough quality wise to trigger the premium in all but one year of production.

Last year he achieved his best yield of 2.8 tonnes a hectare a feat he hopes to repeat this season given a similarly kind finish.

In past seasons, Mr Brain has delivered directly to GrainCorp's Numurkah oil processing facility but this year it will be to GrainCorp's delivery site at Cosgrove near Dookie.

Monola is grown in a closed loop, with contracts offered either through GrainCorp or MSM Milling.

Because of the proximity of the delivery sites it is only feasible for western Victorian, central west and southern NSW growers to produce.

Monola was developed by Nuseed via canola modified by traditional plant breeding with no genetic engineering involved.

It bears a strong resemblance to canola with the added advantage of being well suited for use at high temperatures in the fast food-service industry, restaurants, hospitals and the like which are dominated by highly saturated oils and fats such as palm and tallow oil.

Nuseed has aspirations to have 15,000ha planted to the 422TT variety in Victoria next season and 16,000ha in central western NSW.

James Dellow, procurement manager at MSM Milling, Manildra, NSW, said up until last year Monola lagged in yield up against canola, which had been offset by paying a premium to encourage more growers to plant it.

Last year, however, he said it was a "star performer" in the area MSM Milling had contracted farmers growing it.

"This year a lot of guys have turned to it based on performance and the premium that is there," Mr Dellow said.

"If they can get two tonnes a hectare some guys could achieve up to $1800/ha quite easily this year."

GrainCorp, which has partnered with Nuseed for several years with its Monola program, has receival sites in north, central, and western Victoria to cater for growers from southern NSW to Victoria's Wimmera and Western Districts.

Mr Keeping said to get growers to plant Monola, it had to provide a more compelling return than canola, which was why GrainCorp offered a premium of $100/t.