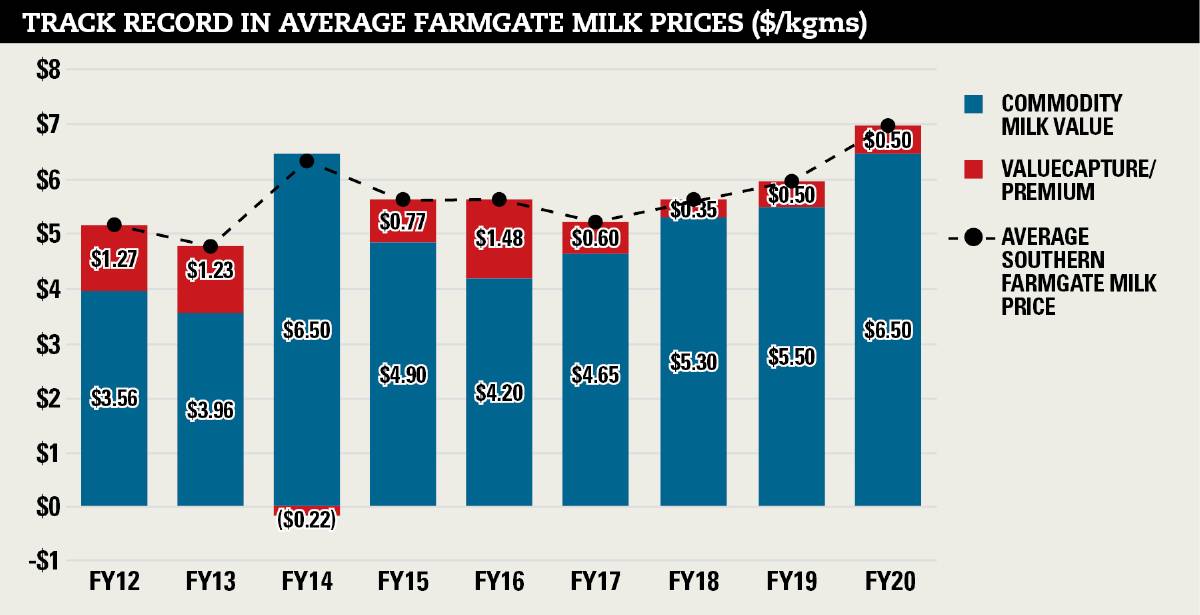 POSITIVE TERRITORY: The dairy sector is enjoying an extended period at or near the top of a commodity cycle.

Dairy analysts say the industry may soon be in for a soft landing.

Dairy analysts have been reluctant to claim the sector is part of the overall Australian agriculture supercycle, saying it may soon be in for a soft landing.

Dairy Australia industry insights and analysis manager John Droppert said the sector was enjoying an extended period at or near the top of a commodity cycle.

"Is this a new normal, or something fundamentally different to the normal commodity cycle?" Mr Droppert said.

"I'd say no, not really - dairy commodity cycles vary in length both on the ups and downs."

He said as China recovered early from COVID-19, the growth in milk production had been soaked up.

Additionally, logistics issues had encouraged buyers to build stocks and maintain full pipelines due to the additional time taken to receive and clear product.

On the supply side, the sector had seen no major disasters or breakout growth.

He said labour had been a constraint in many regions, leading to production caps on-farm and in processing plants.

"So while there is no shortage of risk out there, what goes up will come down," he said.

"There's not too much milk, demand is sufficient, and the Australian dollar is staying reasonable.

"It is also important to acknowledge that there is nothing to suggest the cycle will not ultimately turn, as it has every other time."

Australian Dairy Products Federation president Grant Crothers said within the considerable volatility of the dollar, there was an underlying appreciation in price on a 52-week average basis.

"Since March 2021, Australian dollar commodity milk value has been hovering at $6.50-$7.80 a kilogram milk solids and that is supporting the current Southern Region farmgate milk price of about $7.50/kg MS," Mr Crothers said.

"But it is supported by a 25 per cent appreciation in Australian dollar-based commodities.

"In addition you can add a layer of value driven by a very competitive raw milk collection market and processors making efficiency and productivity gains, while operating on increasingly fine margins."

The additional value captured by processors above the farmgate milk price was currently sitting at 50c/kg MS.

Rabobank senior analyst Michael Harvey said the sustained period of expansion, usually driven by robust growth in demand, meant the sector was in a supercycle.

"You could argue we are simply because we have seen a period of sustained strong import demand, which has supported global market prices," Mr Harvey said.

But he said there were signs China's import demand would soften in the next six to 12 months.

Weather, rising feed costs and labour shortages were having an impact on the supply side of the market, which was resulting in modest growth.

Farmgate prices were at near record levels and were guaranteed.

"What it does lead to is the likelihood of the third year in a row of really good profitability and that is not something that happens often," he said.

"Three years in a row is uncharted territory."

He believed there would not be a major collapse in commodity prices, rather a soft landing.

FreshAgenda director Steve Spencer said there was no evidence of a supercycle in the dairy sector.

"We are in recovery and adjustment from the effects of COVID on structural demands," Mr Spencer said.

"While we have demand which is reshaping, we certainly have a strong pull from China, that is about an improvement in dairy's proposition as a health fortifier or a key nutritional part of the diet."

He said imports were strong to China, as suppliers were keen to ensure they had enough product on hand.

"They are still dealing with COVID up there and seeing plenty of disruption at ports," he said.

Mr Spencer said growth into China was balancing the world, offsetting weakness in other areas.

"In a supercycle, you tend to have the whole world moving, we don't see that, it's still a patchy story," he said.

The story Dairy reaching the top of a regular price cycle first appeared on Stock & Land.