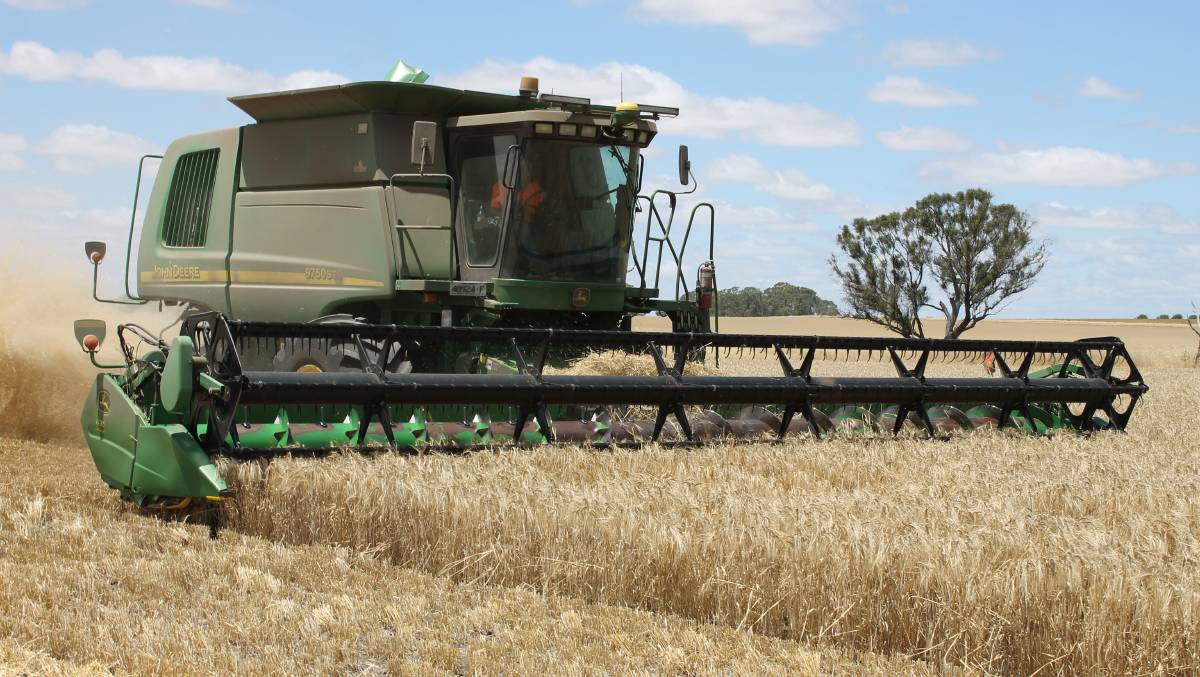 A lack of easily convertible land suitable to cropping means Australia's area planted to grain crops is set to plateau.

Further advances in Australia's grain production will more likely come from yield gains rather than more planted area according to a report.

HOT ON THE heels of a Australian Bureau of Agricultural and Resource Economics and Sciences reporting a winter crop plant of 23.2 million hectares, a national record, a study conducted by ANZ has found Australia is close to reaching its peak grain acreage.

ANZ last week reported that after years of steady, if cyclical, growth Australia's cropping industry now was unlikely to see further large scale growth in terms of area planted, primarily due to a lack of suitable land to be converted into cropping and competition from other agricultural industries, primarily sheep production.

ANZ's head of food, beverage and agribusiness insights, Michael Whitehead said previous periods of gains in planted area had been driven by big growth in plantings in new regions being opened up.

"The study for the report goes back to the start of the 1960s and while Australia's cropping acreage has varied considerably over the decades it has broadly been on an upward trend," Mr Whitehead said.

"Within that we see periods where new areas are being opened up, whether it be the Esperance region in WA in the 1960s, the drier parts of north-western NSW and eastern WA in the 1970s and 80s or the high rainfall zones in Victoria and the eastern Riverina in the 1990s and they play a role in that increase in area."

Mr Whitehead said there was no logical new land likely to be planted to grain on a large scale.

"With concerns about drying weather patterns it is unlikely people will be taking more marginal grazing country and planting it to grain on a permanent basis, while in the high rainfall zones there is stiff competition from other agricultural commodities that are doing well, such as cattle and sheep."

"Over the past decade, Australia's cropping acreage has plateaued to a degree not seen before, and while there was some volatility caused by drought during that period, cropping acreage would appear to have peaked in a band between 20 to 23 million hectares."

Neil Vallance farms at Lake Bolac in Victoria's Western District, one of the high rainfall zone regions to see big expansion in cropped area over the past 30 years.

He echoed Mr Whitehead's thoughts, saying most arable land in his area that could be cropped had already been brought into production.

He said mixed farmers were generally happy with their mix of between 70 and 80 percent cropping and 20 to 30pc livestock.

"We've seen some instances where people have tried to push it a bit harder, but the low lying areas do get very wet, so farmers generally recognise there are paddocks that just are not that suited to growing grain."

He said farmers had looked at renovating rocky ground in the region with a view to cropping and also pushing further south into wetter areas but added there was limited scope in these moves.

"The rocky ground is very expensive to bring into cropping, if it can be done at all.

"We bought a farm to the south of us at Mortlake last year and we've found it gets very wet, we plan to use it more for pasture and livestock."

"Dual purpose grain and graze canola is fantastic, this year the canola did a great job in drying out the profile and it tolerated the wet autumn much better, so that might mean a few more marginal paddocks can be cropped."

This year, with high prices and the excellent autumn planting conditions, especially in the nation's largest two grain producing states, WA and NSW, it was always likely that the plant would go close to record levels.

In spite of the high grain prices on offer at present Mr Whitehead said he did not think grain would be permanently taking area off cattle or sheep.

"To some degree, the growth rates of Australia's three largest agri sectors - cropping, cattle and sheep - impact each other, with the major interaction being between cropping and sheep.

"Over the same period, Australia's sheep numbers have also seen their steadiest period, sitting within a narrow band of 68 to 75 million head.

"In recent years the volatility has gone out the sheep meat industry and I think most farmers that have sheep will be happy to retain then.

"A big part of the make-up of the grains and sheep industries is mixed farmers and I think most will be happy with the mix of grain versus sheep on their properties at present whatever that percentage is.

"You may get years with a great start and high prices like this year where more grain goes in and others where they leave more pasture, but there is not going to be a massive swing one way or another over the medium term."

Mr Whitehead said there had been talk about the potential of northern Australia producing more grain.

"However, to grow crops successfully irrigation is required as varieties designed specifically for the tropics and then there are the logistical matters of growing crops so far from a market, so while it is an idea it is unlikely to happen in the short-term."

The ANZ paper also found that there was markedly more diversity in the grains industry today, with wheat's acreage share dropping from around 80 per cent in the 1960s to around 50 percent today.

While wheat, barley and canola have been the dominant crops, other varieties such as oats and sorghum may see an increase in production share Mr Whitehead said.

It also forecast an increasing number of larger farms choosing to produce pulses, including chickpeas, lentils and beans.

Domestically, this would be driven by the growth of the plant-based protein market, while the export demand for these is also likely to see strong growth, particularly as COVID disruptions fade.