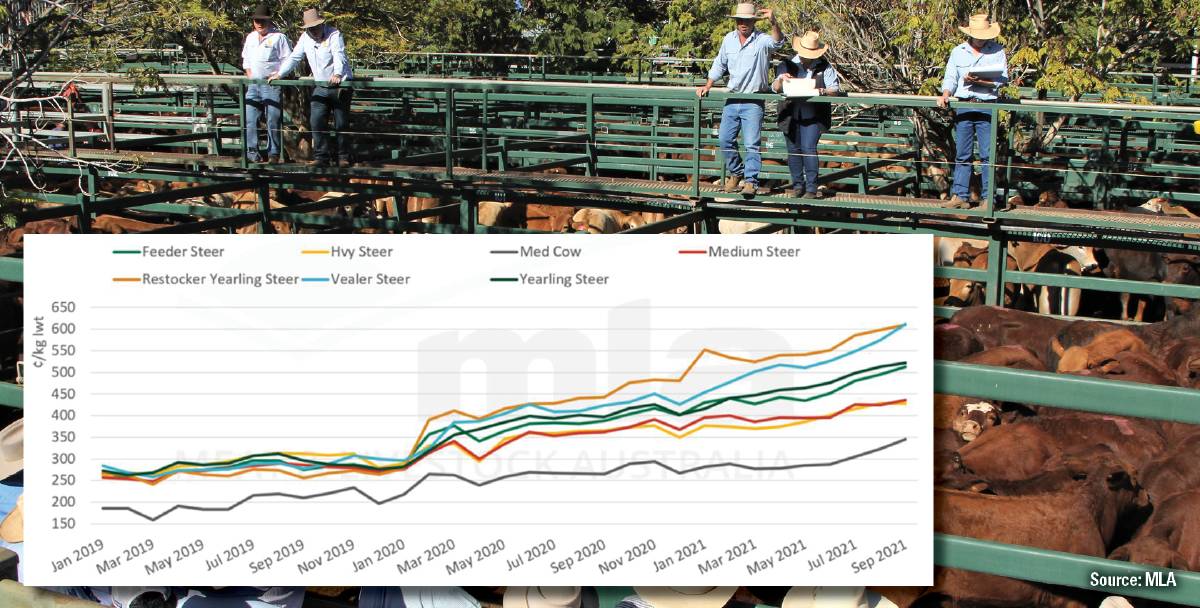 CATTLE prices across the board continue to travel in record territory, fueling record income expectations for beef producers well into next year.

That is flowing over into other sectors of the economy in a way that can only cement the beef industry's intrinsic value to Australia.

Meat & Livestock Australia market analysts say the domestic cattle market is now as strong as it has ever been, with prices all along the supply chain rising last week and multiple saleyard indicators hitting new records.

The Eastern Young Cattle Indicator is at 1029.50c/kg carcase weight, only a few cents shy of the all-time record set at the end of August.

Analysts and agents point to the phenomenal confidence in the market on the back of excellent season conditions, low global beef supply hitting up against growing demand in Australia's key export markets and a widespread lack of cattle as the herd is being rebuilt.

Victorian agent Simon Henderson, Phelen & Henderson & Co at South Gippsland, described the situation this way: "It constantly seems to be a leap of faith to pay the sort of money for cattle being paid but only a fortnight later you look quite smart - those prices then look cheap."

Government economists are now forecasting the average saleyard prices in 2021/22 to rise by 12 per cent to 702c/kg liveweight.

ABARE's Jonathan Wong said the momentum of prices to August would likely keep the market strong for the rest of the year, however it was unlikely the strength at that level could be maintained for the remainder of the financial year.

"Rebuilding means that more cattle are likely to be available to markets in 2022, easing supply pressure on prices," Mr Wong said.

"Beef export prices are expected to rise slightly but less than saleyard prices."

MLA analysts and agents said in a bid to circumnavigate the high prices, producers were chasing lighter cattle in order to capitalise on feed in front of them and attain a margin by reducing the initial outlay.

The constant upward trend of the market has proven to be beneficial for producers willing to trade, MLA reported.

A report from Thomas Elders Markets' Matt Dalgleish said while feedlot buyers were currently dominating the sales volumes of the EYCI, restockers were paying the big premiums.

The average price for restocker purchases of EYCI cattle neared 1090c/kg last week, compared to 1007c for feedlots and 903c for processors.

Rabobank says it is restocker demand on top of the ongoing worldwide demand for protein that is repeatedly pushing livestock commodity prices to new highs and supporting strong sector confidence.

It's latest rural confidence survey found more than half of the country's beef producers expect the current, excellent conditions to continue over the coming 12 months, while 34pc expect them to improve even further.