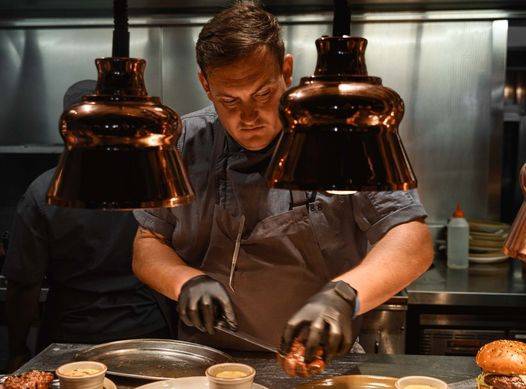 Sean Hall is excited to share a passion for beef at the top Sydney restaurant 6HEAD.

{With a football in one hand and an apron in the other, Sean Hall made a choice.

With a football in one hand and an apron in the other, Sean Hall made a choice that tipped the balance in favor of his love of food.

His full story can be found online at the new Australian Lotfeeders' Association grainfed beed hub.

Life could have gone in a very different direction for the executive chef at chic Sydney eatery 6HEAD.

In his early 20s, Mr Hall faced the dilema of whether to play professional rugby, or head to culinary school.

He chose the latter and started his pathway to chef success.

Mr Hall was raised on his family's cattle property near Johannesburg, in South Africa, and has a good understanding of animal welfare and the impact of management practices and cooking techniques on meat flavour.

His passion for food led to a stint in the United Kingdom to complete a chef's apprenticeship.

He worked with the Jamie Oliver Group in England before shifting with the company to Australia, where he advanced to being head of culinary for the Seagrass Boutique Hospitality Group.

This group oversees seven brands across the country, including the 6HEAD premium steakhouse that overlooks Sydney Harbour and has a reputation for serving-up fresh, uncomplex dishes that allow the produce to "speak for itself".

In keeping with the signature 6HEAD goals, Mr Hall's painstakingly-selected menu focuses on six cuts of steak. These are the rib-eye, eye fillet, rump, T-bone and sirloin.

People come in expecting quite big flavours in their steak, and I think grain-fed product delivers on that. - Top Sydney chef Sean Hall

Regardless of cut, Mr Hall said was hard to go past the incredible flavour that grain-fed beef delivered to the table.

"It is intense, and the marbling is much higher with grain-fed beef," he said.

"People come in expecting quite big flavours in their steak, and I think grain-fed product delivers on that.

"We offer a variety of different cuts, but ensure that every product or steak we put on the plate is packed with flavour."

In the past year, 6HEAD has made a concerted effort to support Australian beef producers.

Sustainability and ethical practices rank as two of the highest priorities the restaurant is looking for when partnering with beef suppliers, and Mr Hall said this had been much easier to find in recent years.

"In the past five years, we have seen producers and smaller feedlotters really put a lot of effort in to quality - and ensuring their environmental impact is in balance with the amount of cattle they're producing," he said.

"That shift to sustainability is very important to us.

"I have the easy job. Producers (and finishers) are doing the hard work to make sure the feedlot is run properly, and that cattle diets are correct to provide optimum flavour in the meat."

Mr Hall visits beef suppliers and relishes sharing the story behind the product with staff and customers.

"People are certainly wanting to be more educated about what they put on their plate and, in turn, we want to nurture that," he said.}