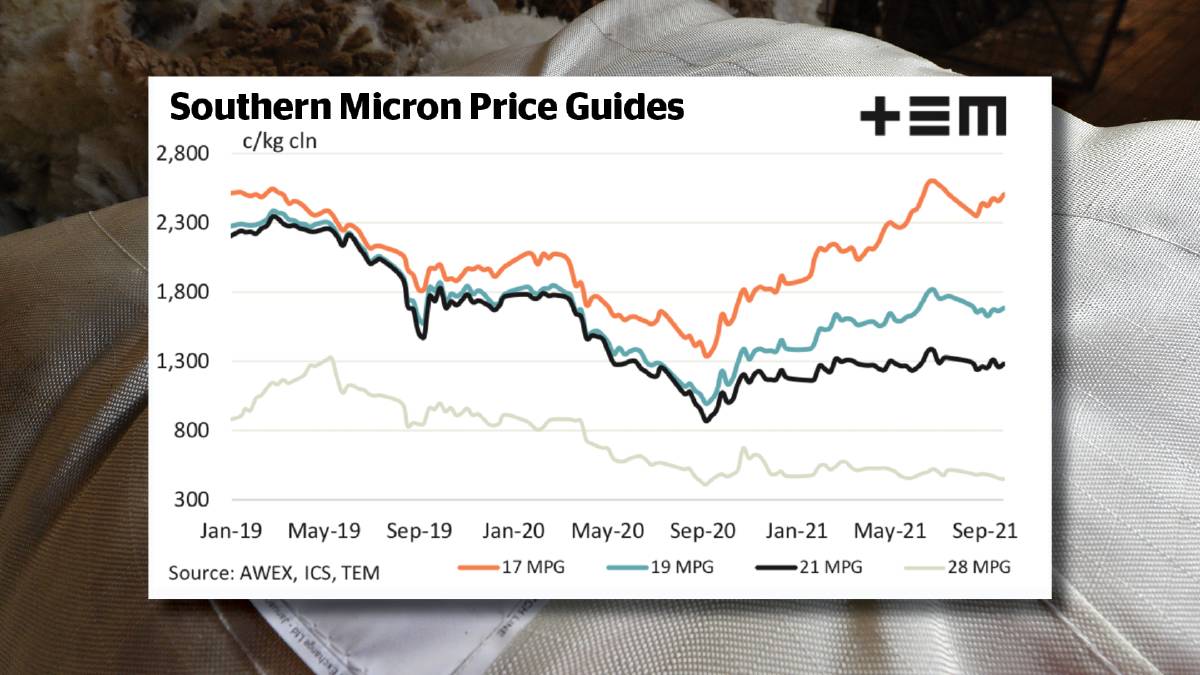 Improved levels of demand partly due to the return of European interest saw positive results across most sectors of the Australian wool market last week.

And according to the AWEX report specialty non-mulesed types came under intense buyer pressure and the prices being achieved for these types was significantly higher than other similar types.

Merino wools were generally 20 to 30c dearer, but the better specified, stylish and accredited wools gained 30 to 50c on top of these already established premiums in the market place.

Andrew Woods of Independent Commodity Services, said demand for the better specified fine Merino wool is being driven by a re-awakening of European demand after a tough year due to the pandemic.

He said the volume of wool being offered remains self-constrained, but still well above the levels of a year ago.

"As such, farmer stocks are building at a much slower rate than in the middle of 2020," Mr Woods said.

"A slowing Chinese economy, exacerbated by the problems in the building industry, is causing the supply chain focussed on Chinese retail sales to be cautious.

"It is early yet in the new northern hemisphere Autumn/Winter season so useful signals about retail demand are yet to become available.

"Despite the myriad of issues about in the world, solid forward bids for 19 and 21-micron extend out to the autumn of 2023."

"As such it was not surprising to see premiums for good accredited fleece wool to ease," Mr Woods said.

"These best style wools are selling for around 108-110pc of their point of micron MPG."

It was first-stage manufacturers that were on the top of buyer's lists with over 25pc of Merino fleece wool being purchased by by just two entities.

China's and Europe's largest top-makers were dominant with traders often 'out-muscled' by the two.

Price for 19-micron wools - the bulk of the Merino market - continues to drift sideways.

"This is due to the reluctance of growers to sell if it falls and a lack of demand, especially at this time of the season, capping any propensity to rise," Mr Woods said.

"A positive note in the current market is the forward bids out to early 2023 near current auction levels."

Crossbred prices move closer to towards parity with cotton

The crossbred sector continues to struggle and were barely firm to 5c cheaper, however, a good clearance of 91pc was achieved.

In the carding sector the north and south had solid increases, in the west the Merino Carding Indicator (MC) fell by 10c, bringing the three sectors into closer alignment.

As shearing ramps up across the country, the amount of wool making its way to market increases.

And although the market has been comfortable with the level of supply coming forward, with the last three weeks a steady flow of about 30,000 bales clearing to trade, this week may prove a test as there are 41,652 bales selling in Melbourne, Fremantle and Sydney.