NORTHERN LIFT: Profits lifted on northern Victorian farms last season on the back of a good season and lower water prices.

But the figures revealed a mixed picture in different parts of the state.

Northern Victoria led the way with the highest profits in 15 years on the back of better seasonal conditions and reduced irrigation costs.

South-west Victoria showed a lift in EBIT but ROTA slipped because of big land value increases.

The Dairy Farm Monitor project is a joint initiative between Agriculture Victoria and Dairy Australia and is now in its 15th year. 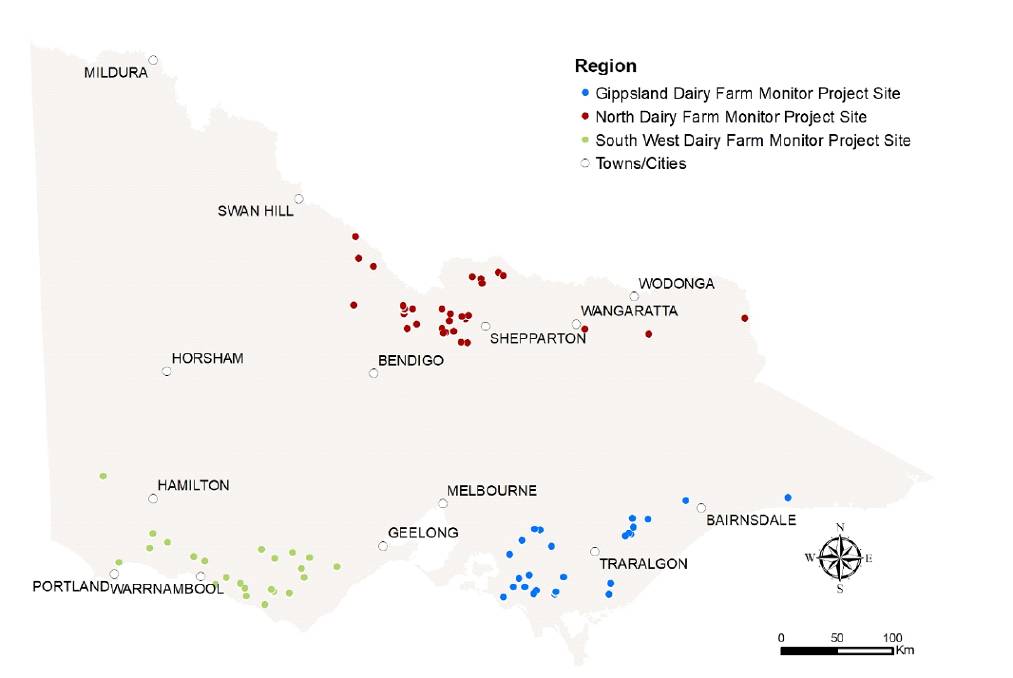 PARTICIPATING FARMS: The location of the 80 farms in the Dairy Farm Monitor Project.

Although results and trends need to be interpreted carefully as participant farms might not be representative of the industry or region and participant farms differ every year, the report does provide useful benchmarking data for farmers.

Victorian Minister for Agriculture Mary-Anne Thomas, who released the report, said it showed the hard work and resilience of Victoria's dairy farmers had paid off after they had experienced some difficult years responding to dry conditions, low water allocations and market volatility.

"I am so pleased to see these fantastic results for our dairy farmers who are the heart of our nation's dairy sector - supporting thousands of local jobs and providing sought-after, premium products to markets around the world," she said.

"This latest report highlights the fantastic year our producers had, but more importantly provides them with valuable data to drive investments in the future of their business so they are set up for success for years to come."

The report revealed that 75 of the 80 farms returned a positive EBIT, despite a lower milk price.

Farmers were able to grow their wealth with a return on equity (ROE) of 8.2pc.

Many farmers made upgrades to items such as tracks, laneways, and plant, and/or application of lime and fertiliser, which for many had been on hold for several years. This was driven by a huge 27pc drop in purchased feed costs.

"Milk production remained stable on a per cow basis.

"Irrigators received 100pc allocation of their high-reliability water shares and purchased allocation water at a lower price than in the previous two years.

"This enabled farmers to irrigate at a higher rate per hectare than last year to manage lower than average spring and summer rainfall."

The lift in profit was despite lower farm incomes, driven by a 4pc fall in milk price. The average EBIT on south-west Victorian farms was $2.04/kg MS, an increase of 12pc.

While the milk price was down 7pc, farms benefited from higher livestock prices as well as cutting their variable costs.

"A combination of lower feed prices per tonne, and reduced expenditure on pasture and cropping improvements, as less re-sowing was required, led to the lower average variable costs," the report said.

"Overhead costs increased by 2pc, largely due to increases in employed labour and repairs and maintenance." The variability in rainfall patterns and climate across the region strongly influenced performance.

The wet conditions in spring 2020 and winter 2021 reduced the ability to harvest fodder.

Average overhead costs rose by 4pc to $2.24/kg MS, mostly due to farmers catching up on delayed and overdue repairs.

These changes in variable and overhead costs, combined with a 6pc decrease in milk price, saw the average ROTA decrease to 5.4pc from 6.6pc in 2019-20. Participant farmers were confident in their outlook for farm business returns in the coming 12 months.

"Across the state, 75pc of respondents were optimistic about business profit for the coming season," the report said.

"There was only one farm in the sample that expected declining returns for 2021-22."

Farmers in the north appeared as the most positive (87pc), followed by south-west Victoria (76pc) and Gippsland (60pc).

Three participants planned to leave the industry in 2021-22.

The survey revealed most farmers were planning to increase production.