Matt Johns and pup Whistler at his family farm at Crymelon, north-west of Warracknabeal, with the water in the table drain in front of the paddock of Cosmick wheat an unusual feature in the district in October.

While the best of Victoria's crops this year are very good the worst are poor - and there is often little distance between the two extremes.

THE HEAVY yet patchy rainfall last week has set some parts of Victoria's Wimmera region set up for what could be one of their biggest seasons on record, while near neighbours are resigned to having a below average year.

While there were some impressive tallies in official Bureau of Meteorology (BOM) gauges, such as 81mm at Rupanyup and 75mm at the Earlstan Comparison site to the west of Warracknabeal there were plenty of unofficial higher readings, with reports of over 100mm in the Rainbow, Wycheproof and Rupanyup districts in the wake of heavy storm activity. 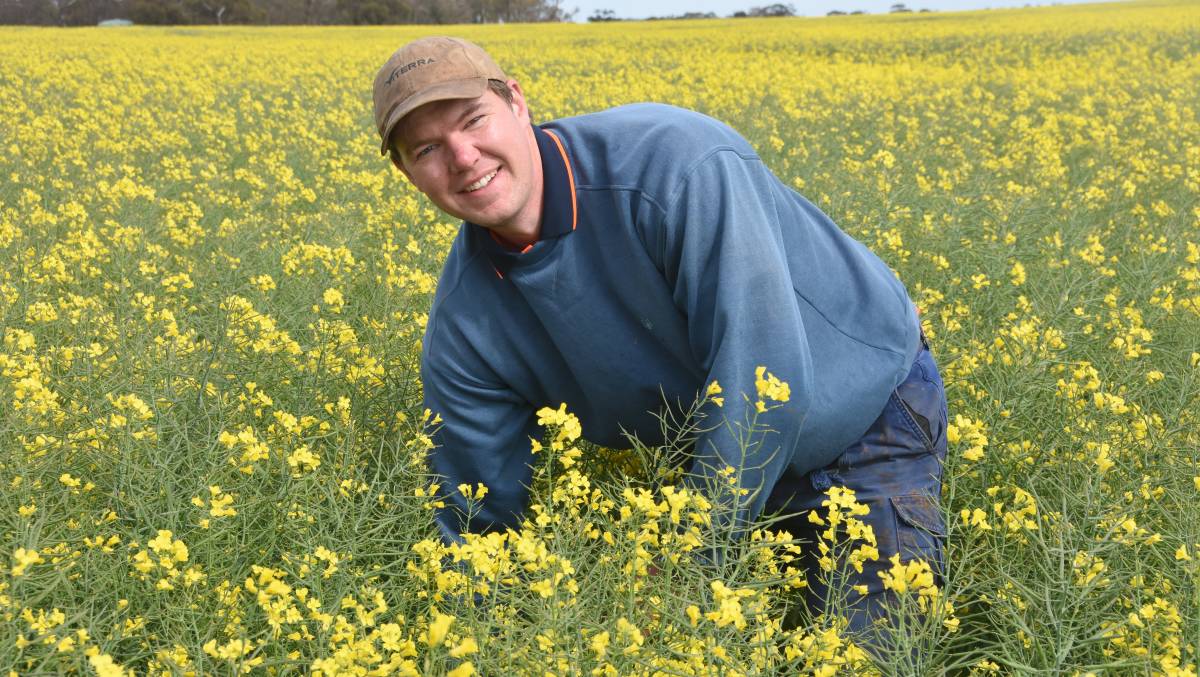 Matt Johns in a paddock of 44Y94 hybrid canola still in flower and podding up well.

Matt Johns, Crymelon, north-west of Warracknabeal, said 60-80mm had fallen over much of the family property.

He said crops were still in a position to take great benefit from the rain.

"We look to be set up really well, the canola is still at the end of flowering so it will be helped by the rain, while the pulse crops also look really good at this stage, so we're hoping there are no issues with frost later on," Mr Johns said.

"With the high prices on offer we're hoping we can get the grain through to harvest safely and then that there is a break in the wet weather and we can get the crop off without any quality issues arising from harvest rain."

But the rain has come a little late to be fully effective for other Warracknabeal district growers. David Drage farms at Lah East, only 20 minutes from the Johns family property, but the seasonal outlook is poles apart.

"We'd be hoping for a slightly below average year at a very, very best scenario," Mr Drage said.

"Hot weather in late August and early September really took the wind out of the crops' sails and they have not really recovered."

Rainfall of around 30-35mm last week will help, but Mr Drage said wheat seed had terminated already in the head.

"It will help what is there to fill and fill really nicely and it will mean those extra tillers won't terminate but it isn't likely to be a great season and the same goes for the canola."

To add insult to injury Mr Drage had recently cut hay which was drenched by the rain, which will cause quality and yield issues.

He said the saviour was that grain prices were so high.

"We don't need to grow as much to break even and it is not a complete wipe-out like a true drought but it is a bit deflating when you see it as the year to really set yourself up for seasons where the weather patterns are not so hypothetically favourable."

Further to the north, the rain was welcomed in areas such as Birchip but other parts of the Mallee missed out and are set for a lean harvest.

The west Wimmera including Nhill and Kaniva is in very strong shape, however the south-west of the region, normally one of the wettest recorded mostly disappointing totals out of last week's rain, although crops are still in good enough condition to benefit from further rain.

Australian Crop Forecasters' James Maxwell said along with the Wimmera, the North Central and north-east of the state were also geared up for good seasons, while he said waterlogging damage in the Western District was unlikely to cause large scale issues.