WINNER: Comedian and actor Nazeem Hussain declaring that Australian avocados are the "official unofficial sponsor of pretty much everything Australian, ever", in the award winning Our Green Gold campaign.

THERE was another big winner from this year's Olympic Games and it was the only green-skinned competitor from Australia.

Australian avocados came away from the event with a significant boost to their marketing potential having snared a lucrative advertising package.

The "Our Green Gold" campaign aired in television breaks during the Olympics and Paralympics, social media and radio, and on billboards throughout major cities including a mural painting in Kings Cross.

The campaign won the Seven Network's $1 million contest to crown the best ad shown during the Olympics Games Tokyo 2020.

Australian Avocados won free placement in Seven's biggest sporting and cultural moments of the next nine months, worth $1 million.

Funded by Australian avocado grower levies and delivered through Hort Innovation, the campaign has also gathered other awards including the Outdoor Media Association (OMA) Creative Collection Award and the Inside FMCG top marketing pick of the year.

The grower-funded campaign starred comedian and actor Nazeem Hussain, who declares that Australian avocados are the "official unofficial sponsor of pretty much everything Australian, ever".

It has reached more than 17.6 million Australian consumers to date with more activity scheduled over the coming months to support the WA Hass crop and the Shepard variety season.

It's welcome news for the industry which is currently experiencing a glut in various growing areas with new plantations coming online.

Queensland-based avocado grower Daryl Boardman said the campaign reflected what growers wanted to convey to consumers, that avocados are quintessentially Australian and can be enjoyed at every mealtime.

"It's great to see such a positive response to the campaign, we hope that whenever people see green and gold, they think of Aussie avocados," Mr Boardman said.

"The whole concept has really resonated with Australians because avocados are such an important part of our dining culture." 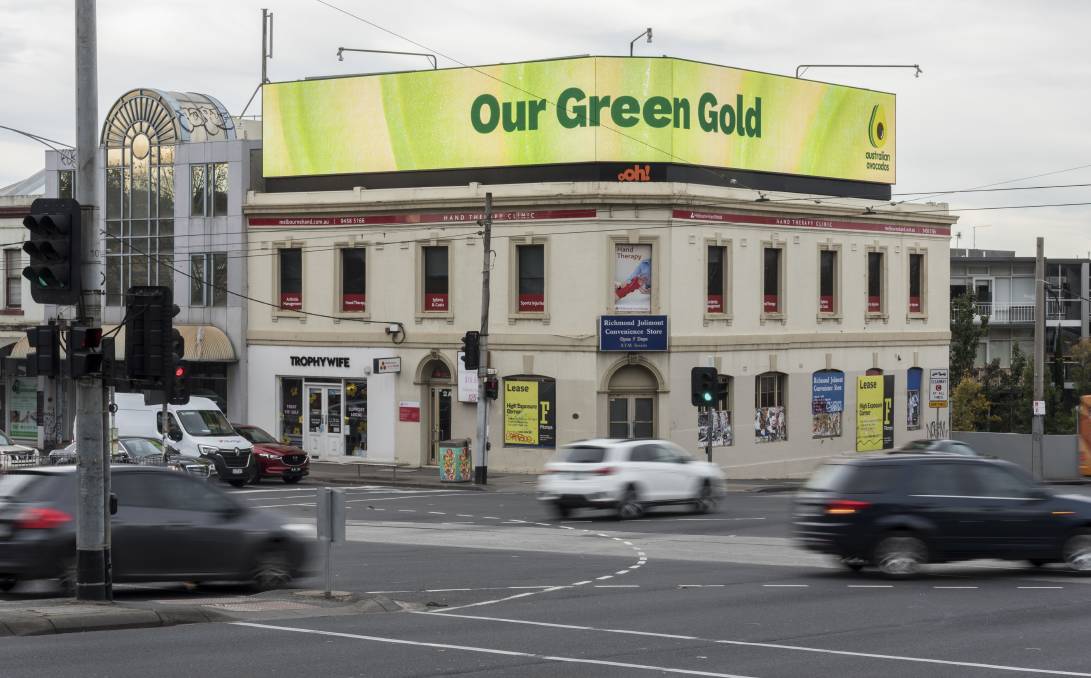 PROMINENT: One of the prominent billboards for the "Our Green Gold" campaign from Avocados Australia.

"From the outset, our avocado grower advisory group helped shape the campaign, and working together with Hort Innovation and partner agencies TBWA Sydney and Atomic 212, we have seen some great results," he said.

"Australian avocados have never been more popular with our research showing two in three consumers are more likely to purchase avocados after seeing the campaign."

According to the 2019/20 Horticulture Statistics Handbook, there are currently more than 750 avocado growers in Australia producing 87,546 tonnes per year valued at $450 million across Queensland, New South Wales, Victoria, and Western Australia.

Avocados Australia chief executive John Tyas said there had been a significant increase in avocado production and supply in 2021.

"This year we're seeing a massive increase in production with a lot of young plantings coming online," he said.

"We're expecting about 120,000 tonnes over the next 12 months. It's going to be a massive crop around the country."

Seven West Media Chief Marketing Officer, Charlotte Valente, said the company launched Favourite Ad of Tokyo 2020 to celebrate creativity and showcase the amazing work of the advertising industry in the Games as voted for by the nation.

"We were stunned by the quality of the ads entered that powerfully tapped into the excitement of the Olympics and connected with audiences," she said.

Seven West Media's director of 7RED, Katie Finney, congratulated Hort Innovation and its agencies, TBWA and Atomic 212°, on the win.

"Their humorous and iconic Australian creative resonated with our audiences and demonstrates the power of contextual, creative advertising," Ms Finney said.

"Australian avocado farmers will benefit from having their Our Green Gold campaign run in the greatest cultural and live moments on Seven between now and the Beijing Winter Olympics."

Atomic 212° managing director and partner Claire Fenner said it was great to see a much-loved Aussie fruit celebrated with the win.

"The campaign featured perfectly in the Olympics broadcast alongside our incredible Aussie athletes," Ms Fenner said.

"Well done to the team at Hort Innovation, Atomic 212° and TBWA for delivering such a memorable and iconic campaign."

Currently, Hort Innovation is investing $15.7 million in research, development, and marketing projects on behalf of the avocado industry, targeting everything from biosecurity measures to fruit quality initiatives and efforts to maximise yield.