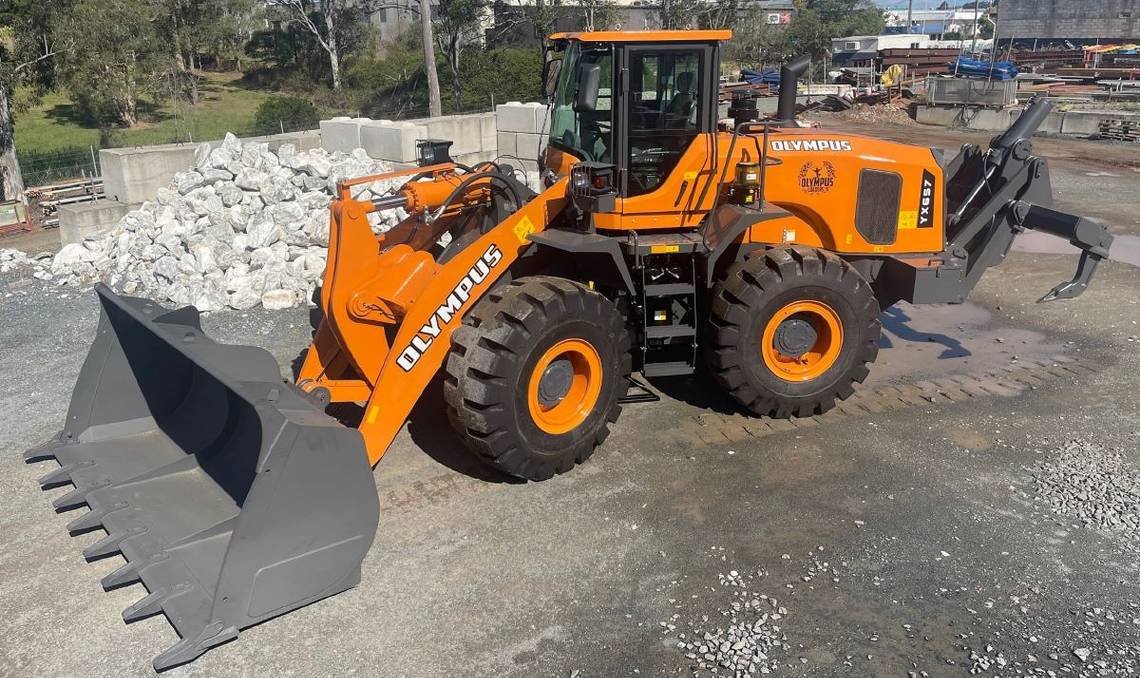 TOP NOTCH: When the best loaders are needed think of Olympus Equipment.

HE likens it to a Swiss Army knife for the bush and Simon Collins isn't known for peppering any story.

HE likens it to a Swiss Army knife for the bush and Simon Collins isn't known for peppering any story.

So it might be worth your while to take a moment and hear him out. The worst it could do is cast a glow on another line of agricultural machines and, at best, it might save your bank account and you could keep some hair.

Mr Collins is the guy behind Olympus Equipment Sales, a specialist outfit supplying all manner of loaders and tractors to the farming sector and others from outlets in four mainland states.

The machinery is imported from China, coming into Australia in all shapes and sizes and has won over a colossal number of customers with the momentum showing no sign of waning, according to Mr Collins.

"The Olympus Wheel Loader factory is by far the best that we have seen since dealing in China," he said. "We are excited to be the only Australian distributor for all Olympus products. We can proudly state these products are an absolute pleasure; they speak for themselves."

Mr Collins and the crew from his Loganholme headquarters in south-east Queensland and outlets in Charmhaven (NSW), Ballarat (Victoria) and Millicent and Kadina (SA) have distributed Olympus loaders for numerous years.

Companies engaged in civil, construction and recycling deploy Olympus loaders, as do producers and growers up and down the eastern seaboard and across to SA.

To get a deeper appreciation of the Olympus story, we must rewind the clock.

"I originally started in the family company bringing in excavators 25 years ago with my father and branched out to wheel loaders probably 12 years back," he said.

"In the early days we were operating as Hercules and selling that loader range but had a bit of a business separation and changed to Olympus.

"We took the products to another level, making them a bit higher spec'd and it's been three years now as Olympus. Nothing has really changed, except the name. We are dealing with the very same product.

"There's a whole array of uses and the accessories at the front of the machine allows the user to run augers, post rammers, stick rakes, etc so they are multi-use - a Swiss Army knife of the bush."

Fate played a hand in Mr Collins and co launching into business with Chinese manufacturers after previously working with counterparts in Japan.

Nine years ago last March, he was still happily importing product from Japan, aware of their technical prowess.

Then the world changed as a subterranean earthquake led to a deadly tsunami, which smashed into the Japan coastline and killed thousands.

"That was a turning point," he said. "It held us up because we couldn't import anything from there.

"So we went to South Korea looking for products and then went to China. We'd been watching China for a while and their products were improving. At first we brought in excavators and they are still going today without a problem."

Mr Collins is about to unwrap his latest ag tractor range, called Olympus by Ensign, after studying their evolution over the past three years.

"They were tested for 12 months in China and for the next two years they've been exported and I've watched and waited for that two years to pass to see if there were any warranty claims," he said.

"From day dot they have produced a perfect product and I did not hesitate to get involved. I will be bringing in 50hp, 60hp, 80hp, 90hp, 150hp, 180hp and 220hp machines. They have three point linkages and I have been working with our service agents, who do tractors as well, so they are spec'd up for Australian standards. They have slashers, front-end loaders; they will take all the attachments."

He is supremely confident the market will embrace these new machines. "The relationships we have with our customers is a seriously important to our business and with the friendly ag community you sell a product to one and he tells someone, who tells someone else. It's the bush telegraph at its best," he said.