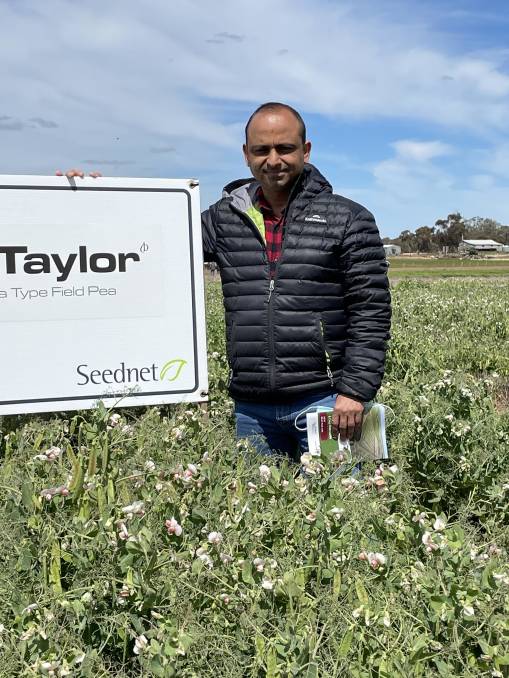 LOST in among the hype surrounding other pulse crops field peas continue to be a quiet achiever in the southern production zone, especially in lower rainfall zones where crops such as lentils are less suited.

The main advantage of the variety is in its strong disease resistance package, with good resistance to both pea seed borne mosaic virus and bean leaf roll virus.

These two viruses are common causes of yield loss in field peas and the resistance package is a key reason why Taylor has consistently been the highest yielding field pea in trials over a range of environments.

Agriculture Victoria pea breeder Babu Pandey said the variety was best suited to medium rainfall zones such as the Wimmera, SA's Mid North and Yorke and Eyre Peninsulas and the Riverina but could also be grown in low rainfall environments such as the Mallee and the northern EP.

While Taylor is another dun variety, with tan seed, the major type of field peas grown in Australia with traditional markets for growers to sell into, the other new variety PBA Noosa is more niche.

PBA Noosa is a blue pea (known as green pea in other parts of the world).

PBA breeders say the variety has been released to allow growers a chance to tap into potentially lucrative premiums for blue peas.

However, with limited markets they advise growers to shore up potential avenues of sale before planting otherwise they may end up selling at normal field pea values.

Dr Pardey said yields were excellent, up to 20-30 per cent higher than a comparable blue pea variety in Excell.

Importantly there is improved resistance to bleaching which allows the grain a better chance of making it through to higher value markets.

Harvestability is improved due to its semi-dwarf, semi-leafless profile and shatter resistant pods.

Tolerance to salinity will make it suitable for parts of the WA grain belt where other pulses struggle.

PBA Noosa will be marketed by PB Seeds and PBA Taylor by Seednet.

Both varieties were bred via Agriculture Victoria research, with12 years of work going into bringing the cultivars to commercialisation.

Sponsored by
Cow muzzles the fingerprints of cattle and may do away with ear tagging
Test
Aussie Lamb are back to remind the world why Australia, and it's delicious lamb, should not be forgotten.
Test
The workers are seeking a decent pay increase per year over a four year agreement, improving their job security and ensuring casuals are looked after, without trading away their current conditions.
Test
It might surprise many people to learn foreign investment in Australian agricultural land has not risen much in recent years.
Test
The federal election campaign is no longer upon us but already here.
Test
The federal government will spend $1 billion over the next nine years to help manage the reef, after the Commonwealth successfully lobbied UNESCO to delay a decision listing the site as "in danger".
Test
A drug considered addictive and dangerous by many countries is in the process of being granted unrestricted access to Australia.
Test
A South Australian ghost town is today at the centre of a national emergency.
Test