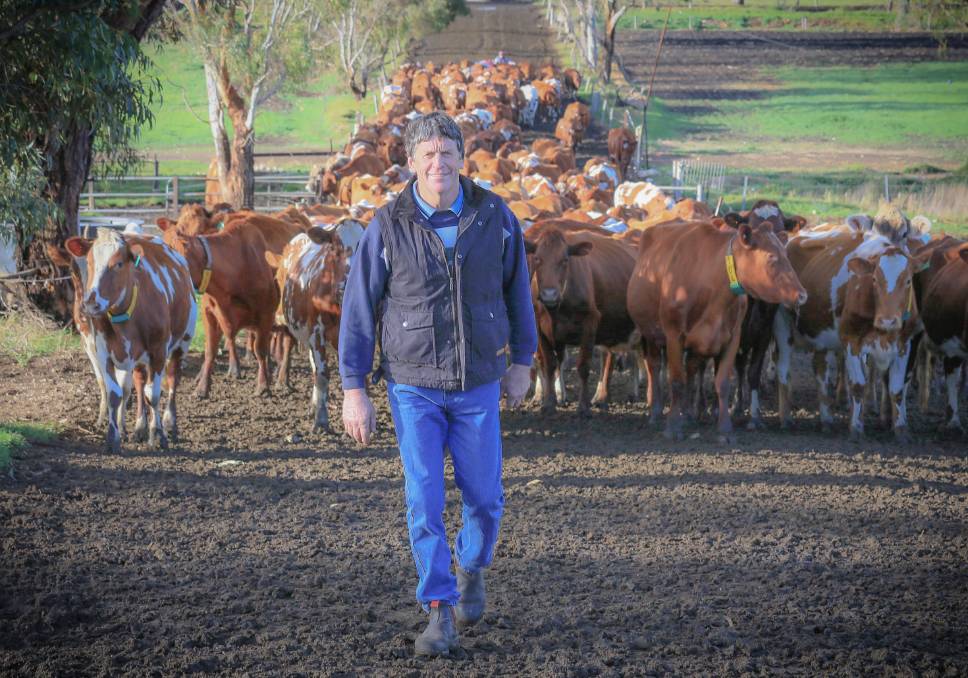 Warren Doecke says Illawarras are the cornerstone for his business. Photo: Michele Hamilton.

Illawarras have underwritten the continual growth of Warren and Cheryl Doecke's Springvale Enterprises.

IT'S taken 38 years for a dozen Illawarra cows on a leased property to morph into a 300-cow fully certified organic milking herd on 607 hectares near South Australia's Murray Bridge.

Illawarras have underwritten the continual growth of Warren and Cheryl Doecke's Springvale Enterprises at Woods Point, which now includes their children, Damien, Michael and Adele.

The deep-red cows have been the family's constant and their registered Illawarra herd prefix is well-known throughout the industry - across all breeds.

Warren said they had started adopting a lot of the organic principles from 2000 and they got to the point where they decided they needed to take it all the way to extract a premium for their efforts.

Their decision to transition into a fully certified organic dairy came in 2006.

Today, they own 550-600-head of Illawarras on their property. Their 300-cow milking herd (including three Brown Swiss) moves through a 50-unit rotary, which has automatic cup removers, milk meters and auto-identification.

This irrigated operation is fully self-sufficient for all its silage and hay. It buys in three-quarters of its annual grain needs (which can cost up to $800 a tonne for certified organic grain prices).

Warren said the Illawarra breed had offered their business several distinct advantages. "They're very adaptable, they have outstanding temperaments, and they're easy calving, which fits in well with what we're doing," Warren said.

"They've also got that little bit more substance and longevity than a lot of Holsteins, they test fractionally higher (higher milkfat and protein percentages), they stand up to the heat fairly well, and I haven't had a professional hoof trimmer on our place in 38 years."

He said their production was also compelling. Springvale has three cows that have produced more than 100,000 litres in their lifetime. An additional two cows - which are both still in the herd - boast more than 90,000 litres lifetime continuing.

His current favourite is 16-year-old Springvale Honeymoon 33 EX91-3E Diamond STP. Honeymoon 33 is due to calve again in September and will start its 13th lactation, building on an impressive current lifetime production of 120,841 litres, 3559 kilograms protein and 3995kgfat.

"I've always had a bit of a soft spot for her," Warren said.

Shows only part of the story

Warren was the Illawarra Cattle Society of Australia's president between 2015 and 2018. Springvale have also owned a number of Adelaide Royal Show champion Illawarra cows.

Among them are two favourites - Springvale Bynette 19 (2015) and Springvale Daisy 48 (2017). The homebred Daisy 48 is one of only two cows in the past 59 years to win champion cow at both the Adelaide Royal and the Mt Pleasant Feature Show. Springvale has also had the honour of winning premier exhibitor of All Breeds at Adelaide (2017).

However, make no mistake, the Doecke family is in the business of making milk and these cows have to pay their way. The herd averages 7500 litres - contributing to a 2.3 million-litre annual production.

"Illawarras have been the cornerstone of our business," Warren said. "Everything we've achieved has been done milking Illawarras, and they have served us very, very well."

He says the organic switch - while financially worthwhile - does not offer massive returns when it was all said and done - given the additional costs of bought-in organic feed. They supply BD Farms, Paris Creek.

"We're not getting rich, believe me," he said. "We don't like using chemicals, sprays and pesticides. We believe in the organic principles, of having healthy soil, healthy plants, healthy animals and healthy humans."

He swears by a 'Pat Colby drench', which includes apple cider, dolomite (a naturally existing rock valued for its liming qualities and high content of magnesium and calcium) and molasses. Cows also have access to an adlib mineral mix (dolomite, sulphur, copper sulphate and kelp meal), apple cider vinegar and cod liver oil.

"We use a lot of homoeopathic cures for mastitis, lameness and retained membranes," Warren said. "It all works extremely well. If we have to use antibiotics, the cow is quarantined for six months. There is a fair bit of incentive to find alternative treatments."

Springvale has contributed bulls into artificial insemination centres, and when it comes to the sires that have worked best for Springvale, Warren names three. Llandovery Presto has 91 daughters in the Springvale herd. Springvale Pride's Anticipation is a younger sire, but already has 32 daughters carrying the Springvale prefix.

"Llandovery Dynamic was another bull we used a number of years ago, but he probably set us up really well with big deep-bodied cows, which Presto has worked very well across," Warren said.

Warren says he is happy that Illawarras continue to underpin his family's business.

"Their ability to keep going and going, and going - in terms of fertility and production - has been invaluable for our growth," he said. "We love the Illawarra breed."