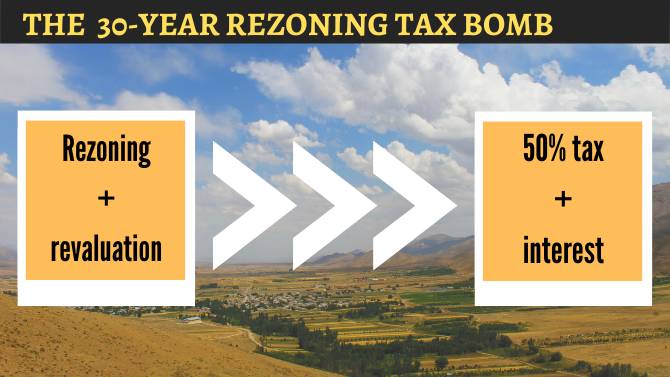 Farmers whose land is rezoned from rural will not only accrue massive taxes, often in the millions, but will ultimately be forced to sell their properties if Parliament votes in favour of new legislation next week, the VFF says.

Victoria's massive new rezoning tax will be debated in Parliament next week and the Victorian Farmers Federation says that, unless it is defeated, farmers close to growing towns will have no choice but to sell up.

The tax applies to the "windfall gain", which is the difference rezoning makes to the value of a property.

If, for example, a farm valued at $3m is revalued at $9m by the Valuer-General Victoria once it's rezoned from rural to residential, the windfall gain or uplift is $6m.

So, in our example, the landowner would have to pay $3m in tax.

None of that has changed since the tax was announced in the last state budget but some crucial details will have significant impacts on landowners.

Only 30 years left to farm

Originally, the tax would have been paid as soon as the land was subdivided or sold.

The legislation now tabled in Parliament requires it to be paid either when the land is sold or 30 years after the rezoning, whichever happens first.

Landowners would need to pay interest on the deferred tax bill every year from the moment rezoning occurred.

"If a rezoning does happen to them, and they want to continue farming, they've only got 30 years to do it now," he said.

"And then they've got to pay interest on the tax at the same time.

"We're talking about farmers who will have to sell their land. Farmers on the edge of towns are being moved out and they're potentially going to be shut out of agriculture."

The advocacy group and pressure from industry has, however, won some small but important exemptions.

It would allow families to manage succession without triggering the tax payment.

Up to to 2 hectares around a residence will also be exempted, as will rezonings from one rural category to another, such as from rural conservation to rural farming.

The windfall tax was designed to support the development of infrastructure to support growing towns, Victorian Minister for Planning Richard Wynne said.

"It's only fair that those making large windfall profits return a reasonable proportion to the community, so that we can provide the infrastructure needed to help invest in important community facilities," he said.

Victorian Farmers Federation president Emma Germano called on the government to guarantee the money would be reinvested locally rather than absorbed into general revenue.

"We don't think that this should be a tax that you get to collect and then not utilize in the area that the taxes come from."

The tax would also usher in greater imposts for developers in regional areas than in growth zones around Melbourne, Ms Germano said.

Her assessment was supported by Pitcher Partners analysis, which showed that the equivalent metropolitan levy was between $100,000 and $118,000 per hectare.

Mr Whatman said there could have knock-on consequences. The tax would become a first charge over the land and make it more difficult for landholders to access to finance and develop the land.

"This has the impact of increasing the cost of a house and land package in regional Victoria to the point it will be likely uneconomic and severely impact the availability of housing for workers in the regional Victoria," he said.

"This, in our view, is neither appropriate nor desirable for Victoria. The regions should not be at a cost or tax disadvantage to the metropolitan areas, particularly in relation to the fundamental provision of affordable housing and land."