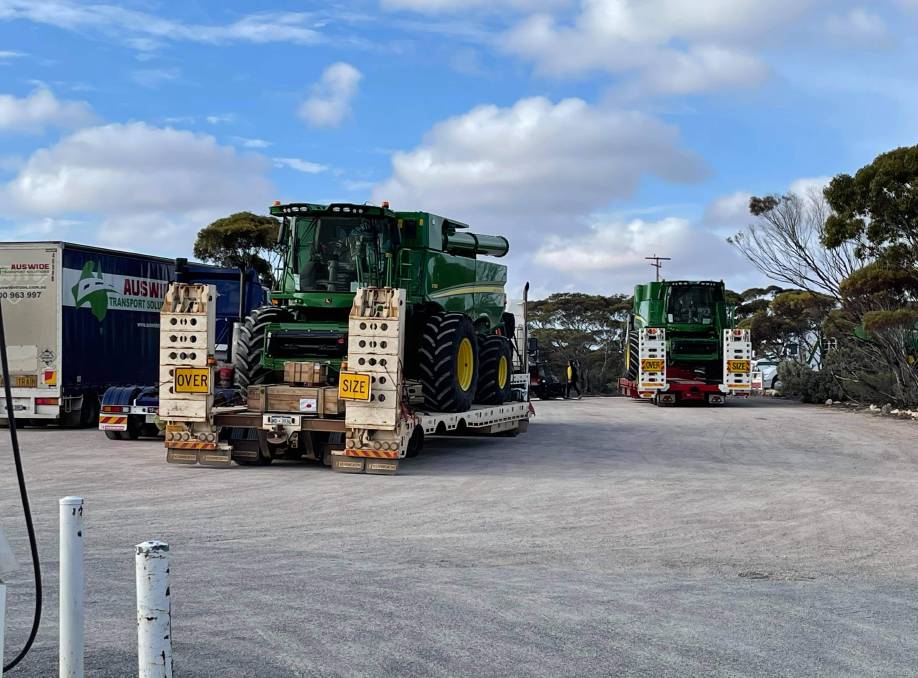 The truck park at Eucla roadhouse, 11 kilometres into WA, with combine harvesters being brought back to machinery dealers after ships carrying them were prevented from unloading at Fremantle due to an industrial dispute and were diverted to Melbourne and Adelaide ports. Photo by: Jarron Ellison.

The first of the 53 combine harvesters, 44 tractors and other agricultural equipment, including new header fronts, diverted on five ships almost a fortnight ago due to a long-running industrial dispute at Fremantle Port, is expected to begin arriving tomorrow and over the weekend.

TRUCK convoys running an around-the-clock shuttle service to the State border and from Melbourne and Adelaide are expected to deliver diverted agricultural equipment back to Western Australian dealerships over the next two weeks.

The first of the 53 combine harvesters, 44 tractors and other agricultural equipment, including new header fronts, diverted on five ships a fortnight ago due to a long-running industrial dispute at Fremantle Port, were expected to begin arriving last Friday and over the weekend.

Dealers contacted by Farm Weekly said the operation to retrieve the equipment appeared to be going smoothly, given the complex logistics of moving wide loads across three States, with expected delays overall being less than three weeks.

Much of the equipment, which was to be discharged at Fremantle at the end of last month and the first few days of this month, was already late because of production and supply chain difficulties as a hangover from the COVID-19 pandemic and buyers were aware of that, some dealers pointed out.

The number of ships arriving at short notice at Melbourne Port to discharge roll-on, roll-off (RoRo) cargo had caused further delays in unloading there, some machinery dealers reported, with freight companies engaged by WA dealerships unable to start loading until Tuesday this week, although some of the diverted ships had arrived from Wednesday of the previous week.

Farm Machinery & Industry Association (FM&IA) executive officer John Henchy said he had spoken to Wallenius Wilhelmsen, the operator of the five diverted ships carrying agricultural equipment, on Tuesday and confirmed that cargo had been discharged and was moving out of Melbourne.

"The equipment appears to be moving, if somewhat slowly, so it seems all is on track so far and that is good news," Mr Henchy said.

As previously reported in Farm Weekly, Mr Henchy warned Agriculture and Food Minister Alannah MacTiernan in August that if not resolved, the industrial dispute which began on July 30 at Fremantle Port had the potential to impact delivery of machinery in time "for this hay and harvest season".

Mr Henchy had asked that his letter be passed on to Ports Minister Rita Saffioti.

One large dealership chain has dispatched its own trucks and hired other trucks and drivers to run a shuttle service to Eucla - on the WA side of the border - and back to its dealerships throughout regional WA to ensure minimum delays in getting the equipment back, pre-delivery serviced and out to graingrower customers for harvest.

It is collecting combines, header fronts and tractors at the Eucla roadhouse, carted there by Eastern States' contractors, with the equipment offloaded from trucks from the east and loaded onto WA trucks in the roadhouse truck park.

The aim of the shuttle service is to avoid any further potential holdups with driver COVID-19 tests and G2G passes for interstate drivers to come further into WA.

After an approach from the Western Roads Federation, which represents commercial road transport operators in WA, Main Roads has granted an exemption to allow two header fronts to be loaded side-by-side, up to a maximum width of 2.8 metres, to facilitate movement of equipment across WA from the border.

Effectively, the exemption means three trucks rather than four are needed to move two combines and their fronts.

"We have created permit endorsement number 8366, which must be used in conjunction with a Class 1 oversize period permit or an oversize road train and B-double period permit (depending on the length of the header fronts)," said Main Roads heavy vehicle road network access manager Rich Bain.

Endorsement 8366 will be available until the end of November when the situation will be reviewed, Mr Bain said.

Related reading: New harvester sales up 33 per cent on 2020 according to TMA

Agwest Machinery Esperance dealer principal Athol Kennedy said he was expecting a customer's swather front, diverted from Fremantle to Melbourne on the Mv Tamerlane, to arrive "by the weekend".

"It was late already and it's got work to do - it's got 3000 hectares of probably three tonnes-per-hectare canola to swathe," Mr Kennedy said.

"I was lucky, the only reason I'll have it this weekend was as soon as I heard it wasn't being offloaded at Fremantle I got straight onto the trucking company we use a fair bit and organised to get it back from Melbourne.

"They (port stevedores) are worried about work-life balance, but we've got people out of work, people losing their houses, small businesses going under and then there's others like us - I know our workload here over the next two months is about to get really ugly, with no time off - some people really should take a good hard look at themselves."

"It's all under control, the customers know they will be late and we'll get them back here by road or boat as soon as we can," Mr Douglas said.

He confirmed he was prepared to ship the equipment back and risk it being diverted due to industrial action a second time.

McIntosh & Son northern group dealer principal for the Geraldton, Moora, Merredin and Wongan Hills branches Anthony Ryan, said he hoped a customer's New Holland header and two header fronts had been loaded in Melbourne on Tuesday or yesterday and that they would arrive early next week.

Brett Young, dealer principal for RedMac dealerships at Three Springs and Moora, said a consignment of MacDon header fronts was on one of the two ships diverted to Melbourne before they got to WA waters, so were unloaded ahead of the other ships.

"We were lucky, we got an email from MacDon to say they are on their way here and they should be with us next week," Mr Young said.

"We've got some (Case IH) headers that were possibly on another ship that was diverted to Melbourne and they should be here too next week.

"State government should have stepped in and stopped it (Fremantle Port industrial dispute) before it got to this stage - they were warned."

On Friday, the Australian Resources and Energy Group AMMA welcomed the news that the Australian Government was seeking to put an end to the Fremantle Port strikes.